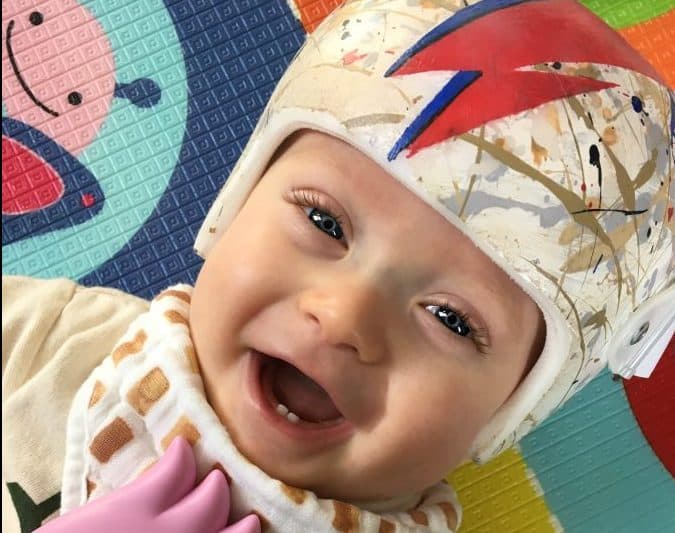 A tot with a flattened head is on the road to recovery thanks to a David Bowie-inspired helmet.

Ten-month-old Arden Wright has now been nicknamed ‘Starman’ by his parents after one of the legendary singer’s most famous tunes.

Arden developed flat head syndrome, known as plagiocephaly, when he persistently slept on his right side and his skull began to compress.

The tot, who tragically lost his twin brother just 30 minutes after birth, was given a cranial-moulding helmet to wear 23 hours a day for three months.

Parents Jillian and Justin Wright, of East Nashville, Tennessee, USA, were determined to make the head-shaping helmet playful, so it could bring joy to their son.

Jillian, 31, a healthcare manager, reached out to local artists on Facebook and soon connected with a painter who agreed to decorate her son’s helmet for free.

The pair settled on a Jackson Pollock-style splatter and a Ziggy Stardust lightning bolt to create headgear fit for a rock star.

The mom-of-one, married to Justin, 41, who also works in healthcare, said: “After everything that Arden had been through I wanted it to be fun and not so serious and medical.

“We wanted him to smile when he saw it.

“Now we can’t stop calling him our little Starman.”

Arden was born via an emergency C-section on April 30 2018 at just 28 weeks but his identical twin Fielding Gray sadly passed away just half an hour later.

The cause was twin-to-twin transfusion syndrome which occurs when twins share the same placenta and one twin is flooded with too much blood, sometimes causing heart failure, while the other twin becomes dehydrated.

Jillian said: “It was a high risk pregnancy and they were born 11 weeks early.

“Poor Fielding was flooded with too much blood flow and he didn’t survive.

“Arden has been incredible. He was the spirit of both boys.

In November, doctors gave Arden a helmet to wear after they spotted his flattening head.

Jillian said: “Arden developed a preference for sleeping on the right and his head became flat.

“We were given a cranial-moulding helmet which would help him become symmetrical again.”

She reached out to Nashville artists on a local Facebook page to see if anybody would be interested in painting the helmet.

Overwhelmed by the response, she settled upon artist Jessica Fife who usually creates realistic portraits and also paints motorbike helmets.

The two women brainstormed ideas and settled upon the ultimate in cool: Ziggy Stardust.

“Jessica and I were just throwing some ideas around and I came up with the idea of a Jackson Pollock-like splatter,” said Jillian.

“I actually have a painting of David Bowie in my bathroom and Jessica said: ‘What about a David Bowie Ziggy Stardust lightning bolt?’

“I thought it would be great for our son who is a rock star in his own right.”

Jessica added: “You can’t get much cooler than David Bowie.

“It’s rare to be able to use your art to help someone without making money at it.

“It made me proud to live where I live.”

Jillian even sent Chrissy Teigan a message on Instagram with pictures of Arden in his customized helmet when she saw that the social media star’s son suffered from the same condition.

She said: “I saw Miles in his helmet and I knew it was becoming more common.

“I sent her an Instagram message with pictures of Arden in his helmet and said she could do it too.”

Little Arden is already a fan of Bowie and happily gurgles along to hits like Heroes and Let’s Dance.

Jillian said: “We love so many of his songs but Heroes, Rebel, Rebel, Starman and Let’s Dance are our favorites.

“We play a lot of music for him and he definitely likes a Bowie tune.

“The helmet is coming off soon because his head is almost completely symmetrical.

“We can’t wait to be able to cuddle him and kiss his cheeks but we will miss his Ziggy Stardust lightning bolt.”