Meet intrepid backpacker Tony Giles who has visited 125 countries around the world on his own – despite being BLIND and DEAF. Daredevil Tony, 39, lost his vision at the age of 10 but learned to travel solo while commuting to his special school as a teenager. He then set himself the target of visiting […] 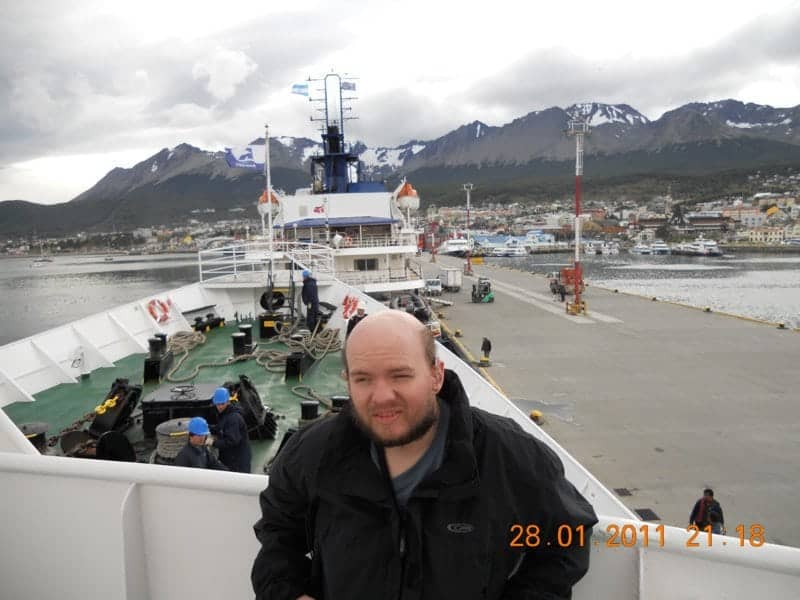 Meet intrepid backpacker Tony Giles who has visited 125 countries around the world on his own – despite being BLIND and DEAF.

Daredevil Tony, 39, lost his vision at the age of 10 but learned to travel solo while commuting to his special school as a teenager.

He then set himself the target of visiting every country in the world because it was “the biggest challenge possible for a blind person”.

Since setting off on his first foreign jaunt to New Orleans in March 2000, Tony has been all over the world – including every state in America.

Tony has fired an AK-47 on a Nevada shooting range, roamed into Mali’s capital during a military coup, and been arrested while crossing the Ethiopian border.

He also met the love of his life Tatiana, a blind Greek woman, and has written two books under his pen name ‘Tony the Traveller’.

His most recent trip lasted seven weeks and saw him ride through the Wadi Rum desert in Jordan on camel-back before visiting Petra, one of the Seven Wonders of the World.

Tony said: “Travelling to New Orleans made me realise I could do it alone. I was by myself and didn’t know where I was going and it became overwhelming.

“But I breathed deeply and told myself to go on. I spent eight or nine days there – exploring and drinking.

“After that I travelled to Australia, New Zealand, Thailand and Vietnam in a five-month trip in 2001-02.”

Tony, of Weston-super-Mare, Somerset, lost his sight at the age of 10 and is profoundly deaf but able to hear with digital hearing aids.

The clearest visual memory he recalls as a boy is watching the sunset over his home town, which he remembers as “a big bright ball of light sinking in the distance”.

Tony became used to travelling long distances while travelling by train to the special school he attended in Coventry called Exhall Grange.

He did not let his impairments hold back his studies and graduated with a degree in American studies from Northampton University in 2001.

Tony has visited a country every year since his first trip, travelling to South Africa, Lesotho, Swaziland, Mozambique, Zimbabwe, Zambia and Malawi in 2004-05.

He visited Iceland and Sri Lanka in 2007 followed by Turkey and Greece in 2009, where he met his girlfriend.

Each trip is funded by a monthly private pension left by his dad who died when Tony was just 16.

“I go by plane, train, bus and boat – but even travelled, for a short distance, by a donkey-pulled cart in north Senegal.”

Without his hearing aids, Tony says he would struggle to travel at all and would be confined his home in the UK – or need regular care.

Of his recent trip, he said: “While I’m walking through a canyon in Petra, this horse and cart goes by giving tourists a ride – I had to get out the way sharpish.

“I could hear the echo in the canyon as the horse and carts traveled along the cobbled stone – that’s how I knew they were coming.

“When we came out I could feel the change because the echo was different again – it gave me a good feeling for the environment.”

He then crossed the Allenby Bridge into Israel and stayed in Jerusalem.

“While in Jerusalem I caught several buses but the people are used to tourists and generally helpful,” he added.

“Some people come up to you and move you out the way – others just move past quietly.”

Tony graduated with a degree in American studies from Northampton University in 2001 and has been to every state in the USA.

While on a tour of Nevada, Tony was taken to a gun range where he fired an AK-47 and a .44 Magnum.

He said: “I told the instructors ‘By the way, I’m blind’ and he went off for a few minutes before returning to say I was OK to shoot.

“They asked me if I would like a target to shoot at and offered a pictures of Bin Laden or Saddam Hussein but I politely declined.

“I loved listening to Dirty Harry as a child so I really wanted to fire the Magnum. It was very powerful and I nearly dropped it!”

In March 2012, Tony crossed the border from Senegal – where a peaceful military coup saw Abdoulaye Wade step down from his role as president – and into Mali where a military coup was also taking place.

Malian soldiers attacked several locations in the capital Bamako, including the presidential palace.

Tony said: “As I entered Mali, I realised that no one had tried to bribe me at the border which was unusual and there was no sign of tourists.

“I knew something was going on when I got to a little town and boarded a night bus which was meant to take me to the capital, Bamako.

“But it drove for an hour and then drove back, dropping us off at a bus station where I slept on a concrete bench.

“We made it to the following day and I had no idea what was going on because everyone was speaking French.

“I slept in a tent in a hostel called the Sleeping Camel where a big group of people were stuck – I wasn’t in any rush.”

More than 30 people were killed in the Malian conflict and dozens more were reported injured.

Tony was also arrested at the Ethiopian border while entering from Kenya in late-2013.

He was held at the crossing with a group of 20 people after they tried to enter while in a truck.

It had collected them from a village half an hour before the border. The next day, he was given his passport back and traveled to Addis Ababa, the capital of Ethiopia.

It took three days and he then returned to the UK.

Tony will spend Christmas at home before deciding where he will visit next in the New Year.