The parents of a Brit arrested in Dubai for accidentally touching another man’s hip to avoid bumping into him have warned others to stay away from the country. Jamie Harron is facing three years in a UAE jail for “public indecency” after he placed his hand on a man so they did not bump and […] 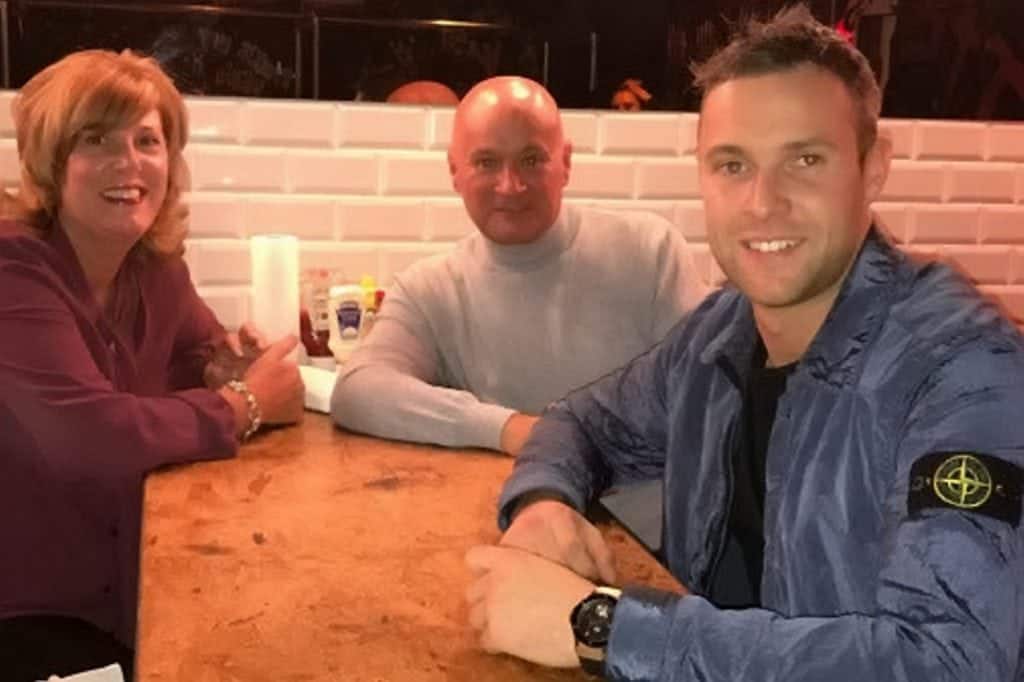 Jamie Harron parents Graham and Patricia are distraught with fear for Jamie’s future.

The parents of a Brit arrested in Dubai for accidentally touching another man’s hip to avoid bumping into him have warned others to stay away from the country.

Jamie Harron is facing three years in a UAE jail for “public indecency” after he placed his hand on a man so they did not bump and spill their drinks.

And as his trial approaches Jamie’s mother Patricia says she cannot even sleep out of worry for her son – and his father is warning Brits against visiting Dubai.

“I’m up all night worrying about what is going to happen to Jamie in court. There’s no chance of sleep,” she said.

And his father Graham, a caterer, added: “Patricia and I have not been able to relax for a moment. We never dreamed we would have to face something like this.

“We are a very close family and it is killing us to think of him spending even three nights in jail, let alone three years.

“People have to stop visiting that country. I think it is unacceptable that the FCO actually promotes the UAE to British tourists.”

27-year-old Jamie has been held in Dubai for the last three months following the incident in June.

He has spent over £32,000 in expenses and legal fees trying to resolve the cultural misunderstanding and has been stripped of his passport and his job in Afghanistan.

He even spent five days sharing a cell and a single mattress with eight men in a notorious prison.

He said: “The whole thing is like a horrible dream and I just don’t know when it is going to end. I thought it would be over by now but it feels like it will never be.

“This has broken me, financially and emotionally.”

And his anxious parents have said that the whole family’s finances are now in “tatters”, after they stretched their own finances to breaking point to help their son.

Jamie’s legal battle began in June, when he was enjoying a night out with friends at the popular Rock Bottom bar in Dubai.

Jamie and his friend had bought their first drink in the crowded bar when he placed his hand on the hip of man to ensure they didn’t bump and spill their drinks.

The Brit denies public indecency, saying he was simply crossing the dance floor to avoid confrontation.

But now his family, and his representative Radha Stirling at NGO Detained in Dubai, are all waiting “anxiously” to hear whether he will be jailed for missing a court hearing – that neither he nor his lawyer were made aware of.

Distraught Jamie said: “Of course if I had known there was a change in the court date, I would have been there.

“I have been waiting for months to appear and now it looks as though I will be
arrested when I go to the hearing.

“It is completely unfair and I can’t understand how I can be sentenced for failing to appear when I was not even informed of the hearing.”

Jamie’s dad Graham added: “We can’t believe this nightmare has gone on for three months. Jamie is a good boy, he is never a problem and never in trouble.

“The UK embassy has not done anything to help and seem to think it is absolutely fine for British nationals to be abused in this way.

“Since Jamie was arrested I have researched and found that this is more common than any of us think.

“Where are the embassy staff who should be offering emotional and practical support to both Jamie in the UAE and his family back home in Stirling?”

In a statement, Radha Stirling of Detained In Dubai said: “This case has been brought to the attention of the UAE government, who we hope will intervene and stop the injustice.

“I have also been contacted by Jamie’s local MP, Stephen Kerr, who asked whether he should intervene, and we have requested he do so.

“More and more British nationals have written Dubai off as a possible holiday destination after several recent high profile arrests and we are inundated with more stories of legal abuse.

“We are hoping to work with the UAE government to make improvements to make the country safer for tourists, expats and investors.”

She added: “We are all anxiously awaiting to see whether Jamie is jailed for previously not turning up to a court hearing that neither he, nor his lawyer, were advised of.”