A desperately ill woman whose brain is dropping out of her skull won’t live to see Christmas this year if she doesn’t raise enough money for life saving surgery. Sarah Gearing, 40, has a condition which causes her body’s connective tissues to collapse, meaning that many of her joints frequently fall apart. This condition, called […] 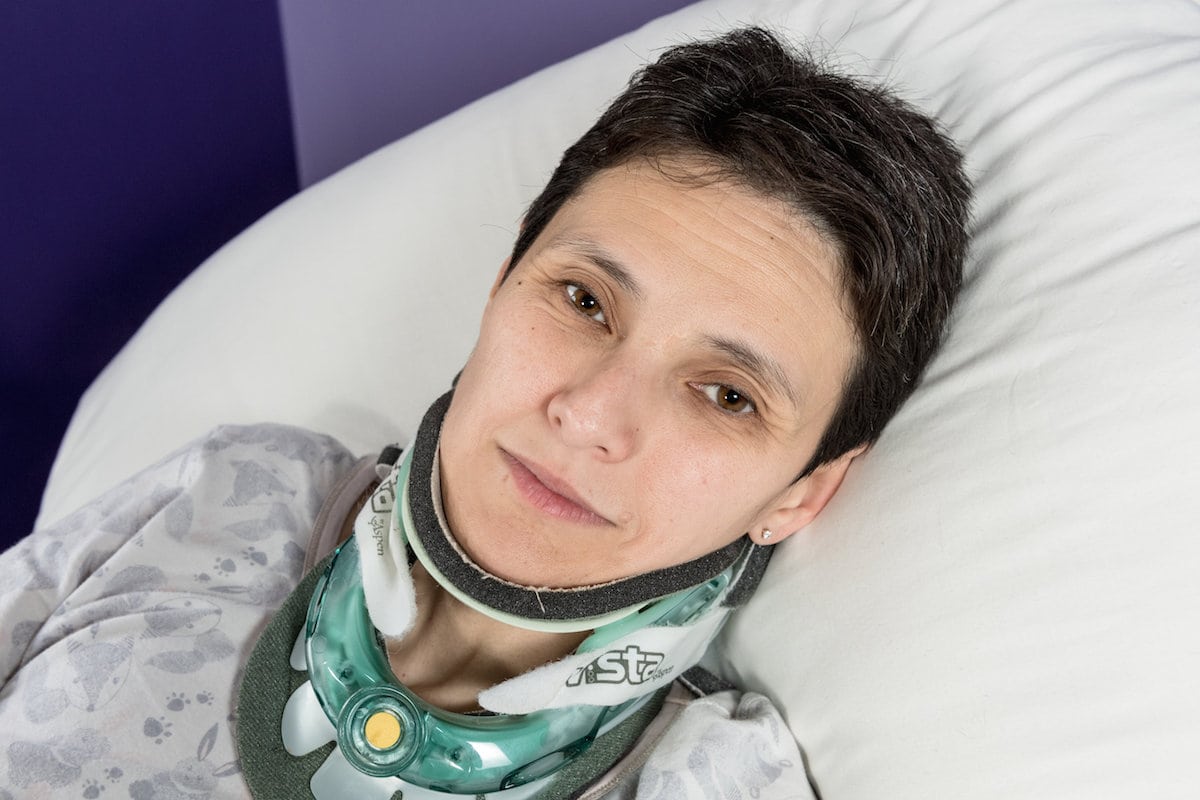 A desperately ill woman whose brain is dropping out of her skull won’t live to see Christmas this year if she doesn’t raise enough money for life saving surgery.

Sarah Gearing, 40, has a condition which causes her body’s connective tissues to collapse, meaning that many of her joints frequently fall apart.

This condition, called Ehlers Danlos Syndrome, means that Sarah needs £130,000 to have a unique operation which will take place in Barcelona and last for over ten hours.

She said: “My surgeon told me that my condition is more critical than it has ever been, and that if I don’t get the surgery I need by next month, I will die.

“This condition has affected every single aspect of my life, right now I wear a neck-brace all the time.

“When I was younger, my coordination was poor and I would bruise easily, since then things have only worsened.

“I had pursued a further education to become a counsellor but because of my health I couldn’t continue it.

“Right now my brain is dropping out of my skull, crushing my brain-stem and spinal cord.”

Sarah has learned that the only surgeons in the world that are able to perform this highly complex and dangerous operation are in Barcelona, Spain or in the USA.

As a result of her condition, Sarah also suffers from her chronic pain, mental and physical levels of incapacity, and joints so loose that her ribs dislocate when she sneezes.

Sarah has a hind-brain herniation, which means that her brain has slipped 7mm out of place and is now preventing fluid from circulating between the brain and spine.

She said: “The surgery I need involves a total neck fusion and procedures to put my brain back where it belongs and permanently relieve the compression on my spinal cord.

“The surgery will involve the surgeons cutting open the back of my skull and re-positioning the brain.

“I don’t understand the technical aspects of it, but it’s surgery that should be done over three sessions.

“They’re doing it all at once because the surgeon doesn’t think that my system can cope with being put through three separate operations.

“I’ve been a full-time wheelchair user for 20 years now- my condition has drastically worsened over the last two years though- right now, I’m in bed almost all day everyday.

“Sometimes, my skull slips away from the top of my spine and my head literally falls out of its place.”

Some of the common EDS symptoms that Sarah suffers are gastric and digestion problems, chronic dislocation of joints, and pains and seizures that leave her disorientated.

The money Sarah raises will go towards the surgery itself and the aftercare that she will need, while she recovers in a specially adapted apartment with round the clock carers.

Sarah currently uses a catheter and lives with full time carer, Sue Geere, and care dog Otto, to help her with tasks like opening and closing doors, picking things up and alerting her to oncoming seizures.

She has lived in constant pain for the past 20 years but was only officially diagnosed with EDS six years ago.

Prior to this, doctors noted various different symptoms but never pinpointed that she had EDS.

Sarah said: “They only really suggested that it was EDS when my condition worsened a lot and more and more well-known EDS cases were popping up in the media.”

Sarah’s friend, Melanie Hartshorn, 28, suffered with EDS and caught the attention of the media when she completed her degree in Biology and attended her graduation ceremony while in a stretcher.

Sarah said: “The surgery I need involves a total neck fusion and procedures to put my brain back where it belongs and permanently relieve the compression on my spinal cord.

“The neurosurgeon said to me if I don’t have the surgery in November it’s unlikely I’ll make it to Christmas.

“He said that this is now a matter of urgency and that, top put it bluntly, without the surgery, I don’t have long left.

“Spain and the US are the only countries in the world that offer this surgery to EDS patients.”

Sarah’s local community in Rochford, Essex and church groups have raised over £55,000 for her, and she remains positive, despite having less than a month to double funds so far.

She said: “I am overwhelmed by the support from everyone, and Rochford Council. I’m really positive about this because I think the trip to Spain two weeks ago was a sign that I’ll be all right.

“There’s just so many things I want to do, like supporting other EDS patients.

“I’m not finished will life just yet.”

To help Sarah, head to justgiving.com/crowdfunding/survivalsurgery4sarah