A story of resilience and hope…Liz’s story It was a vicious crime, attracting international condemnation and media outrage across the world. One night in 2013, a 16-year-old girl was gang raped as she returned home from her grandfather’s funeral in Western Kenya. After being brutally assaulted and beaten by six young men that she knew, […] 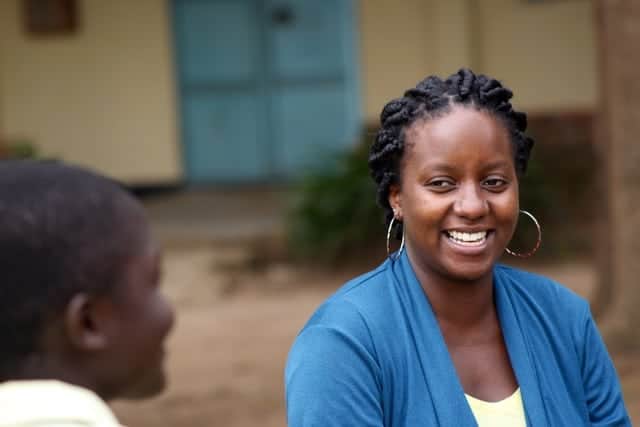 A story of resilience and hope…Liz’s story

It was a vicious crime, attracting international condemnation and media outrage across the world. One night in 2013, a 16-year-old girl was gang raped as she returned home from her grandfather’s funeral in Western Kenya. After being brutally assaulted and beaten by six young men that she knew, her attackers threw her into a 12ft-deep pit latrine, leaving her for dead.

The victim, referred to as “Liz” in order to protect her identity, was found barely alive the next day by villagers. The attack was so violent that she suffered obstetric fistula and spinal cord damage, leaving her incontinent and wheelchair bound.

Three of the perpetrators were detained by locals and taken to a nearby police station in Busia, close to Lake Victoria. But rather than officially prosecuting the men, officers ordered them to cut the lawn outside the station as punishment. Then they were released from custody.

I remember the first time I met Liz – I felt so distraught, angry and at a loss. I was angry at the justice system and at the perpetrators of this heinous crime, and at the wider society for letting this young girl down so badly.

As a program officer for international human rights organization Equality Now, I was there to hear Liz’s story and see what we could do to help. I was unsure what to ask or tell her. She was already dealing with a huge amount of trauma and public attention. Her happy, cheerful teenage life had been torn apart and here she was, so distraught.

The failure of the police officers to arrest the perpetrators and arraign them in court was a serious miscarriage of justice. It also illustrated a common response by Kenyan police to crimes of sexual violence: not taking it seriously; delaying or denying justice for victims; and blaming or attacking the victim’s credibility. Many organizations soon took to the streets to protest against the lenient punishment and to call upon the relevant state agencies in Kenya to arrest and prosecute the perpetrators. A campaign called #JusticeforLiz gained international momentum, with over 1.2 million people signing a petition in support. Mounting public pressure eventually led to three of the men being arrested, charged and convicted. Equality Now supported the legal case, which was seen as a landmark ruling, and the accused were sentenced to 15 years for gang rape and seven years for causing grievous harm.

Although Liz and her family were glad that some justice had finally been served, Liz was still coping with the aftermath of the attack. She had to undergo numerous operations and needed ongoing psychosocial support to deal with the emotional trauma.
Adding to the turmoil, Liz and her family were forced into hiding and had to move to another town because of threats and reprisal attacks from relatives of the men who had raped her. Even at their new home, the family had to rely on Kenya’s Witness Protection Agency for security.

Fast forward four years to 2017, I am seated next to Liz once more and I feel excited about our meeting because this time there is something to celebrate. Liz is now grown-up and she has a smile on her face.

Although still shy, we manage to have a conversation about what she has been doing. An anonymous donor is providing support to Liz through Equality Now so she has been able to continue with her education and her personal effects are taken care of. She loves her new school and is working hard at her studies. Liz no longer requires a wheelchair but one of her legs has still not fully recovered. She walks with a limp and cannot go long distances on foot or participate fully in sports. Her spinal injuries have also left her with ongoing backache. Despite all this, and the monthly medical checkups she requires, there has been an incredible improvement in her well-being and her mood is upbeat.

I am extremely impressed by the transformation that Liz has gone through. I think to myself, she must be a very courageous young woman, a fighter. I feel so happy that she has lived to tell her story and is forging ahead with life.

Liz still does not understand why the people she thought were here friends’ gang raped her. This is something she may never get answers to. However, she is positive about what lies ahead. In her own words, she believes that “the worst is behind her”.

Survivors of sexual violence face huge challenges and it is not an easy journey. The trauma, the stigma, and the financial cost of medical and psychosocial support are too much for many victims living in poverty across Kenya to bear. They need support from their family, their community, the police, the medical profession, and the judiciary. As a society, this is what we must give them.

As I prepare to bid goodbye to Liz, she mentions that she wants to study medicine. I ask why she has chosen this career path. Her response warms my heart. “The doctor who took care of me after I was gang raped saved my life, I want to do the same for other girls who might find themselves in my position.”