A sculptor has pushed the boat out with his latest creation – a vast wooden PIRATE ship at the bottom of his garden. Denis Carbonaro, 48, used fallen branches and recycled wood to build the huge 25ft-high galleon, complete with rigging and masts. Italian-born Denis quit his job as a web designer to become a […] 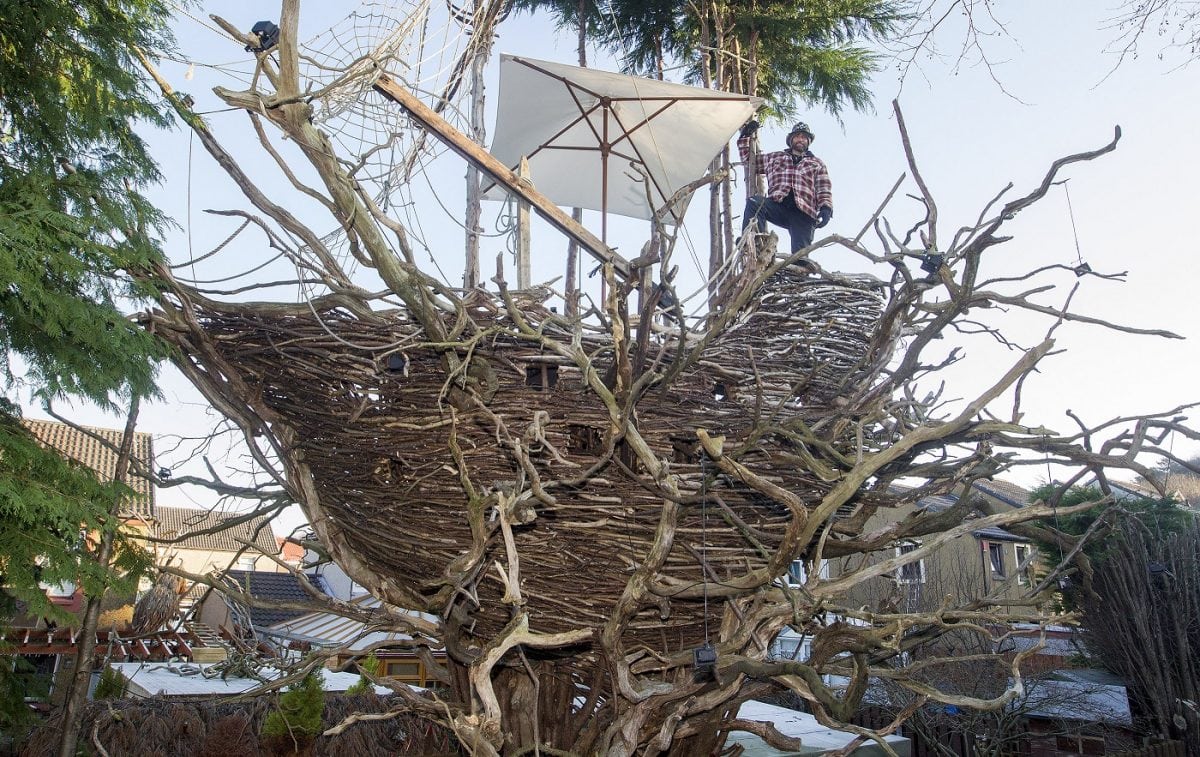 Fife-based sculptor and artist Denis Carbonaro with his Bark Park, larger-than-life creations including a woolly mammoth in the front garden, a huge spider crawling up the house, or a galleon ship in the garden made from foraged tree bark and foliage. Jan 26 2017 . See Centre Press story CPSHIP; A wacky sculptor has turned his property into a tourist attraction after creating an impressive galleon ship, nestled in trees at the back of his garden. Denis Carbonaro, 48, quit his job three years ago to return to his love of art, and soon turned to working as a sculptor. And now he hopes his popular garden in Dalgety Bay, Fife, can lay the future for a dedicated sculpture park. Denis, a former web designer originally from the Italian island of Sicily, has become famous in the area for his wooden sculptures of a mammoth and a spider. He uses only recycled wood in his art, often in the form of fallen branches which he finds in the area.

A sculptor has pushed the boat out with his latest creation – a vast wooden PIRATE ship at the bottom of his garden.

Italian-born Denis quit his job as a web designer to become a sculptor and hopes to turn his garden into a public display.

He has previously made a mammoth and a spider out of wood but his latest effort is his biggest by faarrrr. He said: “I created the mammoth sculpture first and after that I made the spider, and I still had two more trees left in the garden.

“I had the inspiration of creating a nest in the trees with an eagle landing on it.

“When I was doing my research, it became much more complex as I decided to transform my tree into what would look like a very old oak tree.

“I drove around the area looking for oak trees and any branches that may have fallen from them, and I brought them all back here.

“All in all, it took me around five months to get the sufficient amount of wood to do this.

“Once it came to actually building the nest though, I decided to build it in the form of a pirate ship – the idea being that the eagle would be creative.

“I’ve yet to create the eagle but the objective is still to finish it all in order for it to fall in line with the story that the eagle and spider collaborated on this.

“That’s why I have made the sails look like they have been made from web.” Denis, of Dalgety Bay, Fife, added: “I have two neighbours on either side of my house and the council own some land at the end of my garden.

“I’ve never had any complaints since starting the sculptures and I am very thankful to my neighbours for that.

“If they had complained back at the start, none of this would ever have happened, so I thank them.”