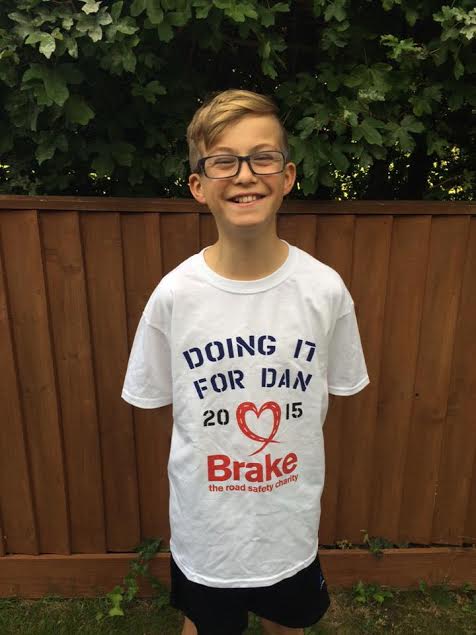 After a young boy was tragically killed while out cycling his friend decided to do something positive and set up a fundraiser for him, which is so successful it has been rolled out across the UK.

Tragically Daniel Climance was only eleven when he was killed on a bike ride with his brother and father in Purton, Wiltshire in June 2015.

Eleven-year-old Callum Smart and his mum Claire wanted to ensure Daniel’s memory was kept alive and put their heads together and came up with a great idea.

Daniel set up a “virtual run” fundraising event, which they called “Doing it for Dan” Within a short period of time hundreds of people signed up across the globe who would run “for Dan.’

During 2015 over one thousand people jogged a total distance of 5,000 miles raising over twenty thousand pounds for Charity Brake’s life-saving work. The road safety charity will use the cash to prevent more tragedies and provide support to bereaved relatives.

Brake, a national road safety charity, dedicated to preventing road deaths and injuries and supporting those bereaved or injured in road crashes, has been so impressed with the “Doing it for Dan – Virtual Run” idea, they have adopted the idea as part of their 2016 fundraising initiative.

Brake is now encouraging people to sign up to take part in their own Virtual Runs that will be taking place this May.

Joe Fenton, fundraiser at Brake, says: “Throughout May 2016 Brake’s asking people to commit to doing a run. You can choose the date, the location, the distance you want to run and you can even set your own pace. The idea is that it is YOUR run – which is a wonderful concept as it means that anybody and everybody can take part – because what you do, is up to you.

Claire says: “I feel so honoured that Brake has chosen to mirror our Virtual Run idea, with Daniel’s story at the heart of their safety crusade.  It’s wonderful to see how powerful the message is and how much it has united people and got them all talking about road safety.  I’m hoping more and more people will join Brake’s Virtual Run and help raise money and save lives”.

Here is a picture of Daniel Climance the young boy who tragically died.