Tributes pour in to Monty Python star Terry Jones who died on Tuesday night at the age of 77. 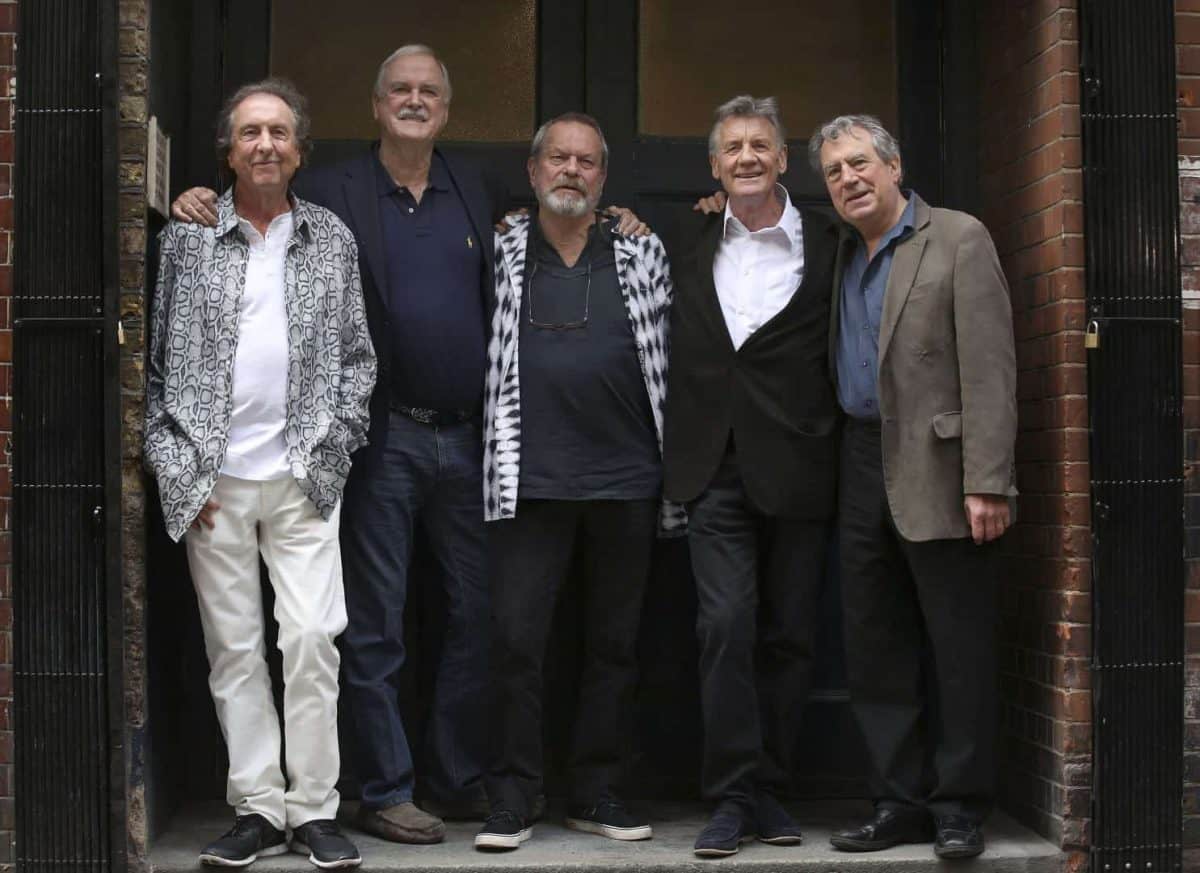 Terry Gilliam was among Monty Python stars and the greats of comedy and the arts to pay tribute to comic, actor, writer, director and peace campaigner Terry Jones who has died aged 77.

The actor and comedian, who directed some of the comedy troupe’s best-loved works, “gently slipped away”, a statement on behalf of his family said.

Gilliam said Jones, who had dementia and died on Tuesday evening, could not have been a better friend.

Writing on Twitter, referencing one of funniest lines from the classic comedy they made together The Life of Brian he said: “HE WAS A VERY NAUGHTY BOY!!…and we miss you.

“Terry was someone totally consumed with life.. a brilliant, constantly questioning, iconoclastic, righteously argumentative and angry but outrageously funny and generous and kind human being… and very often a complete pain in the ass.

“One could never hope for a better friend.

Jones was remembered by other Python stars including Sir Michael Palin, who said Jones was “one of my closest, most valued friends”.

Sir Michael said Jones was “kind, generous, supportive and passionate about living life to the full”.

“He was far more than one of the funniest writer-performers of his generation, he was the complete Renaissance comedian – writer, director, presenter, historian, brilliant children’s author, and the warmest, most wonderful company you could wish to have,” he said.

He added in a statement to the Press Association: “I feel very fortunate to have shared so much of my life with him.”

John Cleese tweeted: “It feels strange that a man of so many talents and such endless enthusiasm, should have faded so gently away…”

Referring also to sixth Python member Graham Chapman, who died in 1989, he added: “Two down, four to go.”

Eric Idle tweeted that Jones’s death “is a cruel and sad thing”, adding: “But let’s remember just what joy he brought to all of us.”

Idle said he loved Jones “the moment I saw him on stage at the Edinburgh Festival in 1963.

“So many laughs, moments of total hilarity onstage and off we have all shared with him. It’s too sad if you knew him, but if you didn’t you will always smile at the many wonderfully funny moments he gave us.”

Jones appeared in the Monty Python’s Flying Circus TV series in a variety of characters, and was known for his performances in drag.

A statement on behalf of his family said they were “deeply saddened” to announce the death of a “beloved husband and father”, who had “given pleasure to countless millions across six decades”.

They hailed an “extraordinarily talented, playful and happy man living a truly authentic life, in his words ‘Lovingly frosted with glucose’.”

Jones died “with his wife Anna Soderstrom by his side after a long, extremely brave but always good- humoured battle with a rare form of dementia, FTD”, the statement said.

“Over the past few days, his wife, children, extended family and many close friends have been constantly with Terry as he gently slipped away at his home in north London.

“We have all lost a kind, funny, warm, creative and truly loving man whose uncompromising individuality, relentless intellect and extraordinary humour has given pleasure to countless millions across six decades.”

They said his work “will live on forever, a fitting legacy to a true polymath”.

The family thanked “wonderful medical professionals and carers for making the past few years not only bearable but often joyful. We hope that this disease will one day be eradicated entirely.”

The Welsh-born star suffered from a form of dementia which affects the ability to communicate.

Jones directed the film Monty Python And The Holy Grail in 1975 with Terry Gilliam.

The group’s Life Of Brian film in 1979, about a hapless man mistaken for Jesus, was attacked as blasphemous at the time but has since been voted the funniest classic comedy.

Stephen Fry, David Walliams and Charlie Brooker were also among those paying tribute to the star, with Fry praising Jones as a “wonderful talent, heart and mind”.

Walliams wrote: “Thank you Terry for a lifetime of laughter.”

Shane Allen, BBC controller of comedy commissioning, wrote that it was a “sad day to lose an absolute Titan of British comedy” and “one of the founding fathers of the most influential and pioneering comedy ensembles of all time”.

His other credits include The Wind In The Willows in 1996, with performances from Idle, Palin and Cleese, 2015 comedy Absolutely Anything, and Personal Services (1987).

Jones took part in a reunion of remaining Monty Python members in 2014.

He had two children with Alison Telfer, whom he married in 1970, and became a father again, at the age of 67, with second wife Ms Soderstrom.

Monty Python’s sound engineer of 50 years paid tribute to Terry Jones as a man who “loved life and lived it to the full”.

He worked with the comedy troupe across numerous projects including their last film, 1983’s The Meaning Of Life, earning a Bafta nomination for his music for the song Every Sperm Is Sacred.

Mr Jacquemin said: “Going round his place for dinner was an experience. He would do all the cooking and he was a fantastic cook.

“He would be able to knock up a great dinner with lots of bibs and bobs just laying around. He was a lot of fun and just loved life and lived it to the full. He was an amazing person and a very clever man.

“He was well-versed in many aspects of life, which helped his creativity. He was also quite experimental. There were lots of times when we would do something and it wasn’t quite right and we would have to twist it around with all the ideas being thrown into the pan. We’d stir it around and we would come out with something very, very good. He was amazingly talented and very quick-witted – very fast indeed.”

Describing his own role within the Pythons, Jacquemin joked: “My job was also to make sense of their terrible filming, really.” Jacquemin, who co-owns Redwood Recording Studios in London’s Soho, continued to work with the Pythons individually after their split in 1983.

He last saw Jones in October 2019 at Camden’s Roundhouse venue, where the Pythons celebrated their 50th anniversary with a Guinness World Record for the “largest gathering of people dressed as Gumbys” – a recurring character in their sketches.

Stars of the film and comedy world also paid tribute to Jones. Actor and comic Adrian Edmondson remembered Jones’s appearance in an episode of sitcom The Young Ones in the 1980s.

Edmondson tweeted: “Terry Jones was the only Python who agreed to appear in The Young Ones. It was like affirmation from God himself. This was the man who’d directed what was, and still is, the funniest feature film ever made. We loved him for it, and always will. Sadly, he’s eaten his last mint…”

Good Omens and America Gods writer Neil Gaiman shared a fond memory of Jones. He recalled: “36 years ago I met Terry Jones. I was meant to interview him. I asked for tea, so he opened a bottle of Chablis & got me drunk.

“He was funny, brilliant and honest. He was irrepressible and is seen here repressing the very young me. Rest in Peace, Terry. You were an inspiration.”

Along with the tweet, Gaiman shared a picture taken during their interview of Jones jokingly pushing the top of his head.

The picture was captioned: “Neil at the feet of the master.”

Queen guitarist Brian May paid tribute to Jones on Instagram, writing: “So sad to hear of the passing of genius comedy star and wonderful guy, Terry Jones. What a legacy to the world. Deepest condolences to his family and the other beyond fabulous Pythons.”

Russell Brand said on Twitter: “May the dear, great Terry Jones find eternal peace in the loving embrace of Jesus Christ. Or more likely of Brian.”

Writer and actor Mark Gatiss said Jones “was a cornerstone of my growing up, from Python to Ripping Yarns and way beyond”.
“A huge talent – and a very naughty boy. RIP,” he said.

Singer Bryan Adams posted a moving message on Twitter saying: “Condolences to his family and to the other Pythons, I lost my dad to dementia, it’s brutal. My life of Br(y)an younger years would not have been the same without your humour. Thanks for the laughs, we could sure use more these days.”

He said: “Terry Jones was a regular guest on ITV’s Tiswas in the 70s and 80s. His was a wonderful and very special presence in the studio. We all looked forward to his visits.

“He had a natural sense of the absurd which, added to his huge talent, made him one of the greats. I am so sorry to have this news. He is sadly missed.”

Eddie Izzard, who worked with Monty Python and appeared in Jones’ 2015 film Absolutely Anything, described him as “the guardian of the Monty Python spirit”.

He added: “He, along with Michael Palin, was a big energy behind the more filmed, visual parts of the Python sketches and together with the other five Pythons they pulled and pushed in different artistic directions to create a wondrous, surreal and crazy thing, and change the face of world comedy. He will be greatly missed but well remembered.”

Comic Rufus Hound tweeted: “You may not have the kind of affection for The Pythons that comedy fans of my vintage have, but know that if you’ve ever enjoyed any flavour of surreal, silly anti-comedy, you owe them.

“And Terry Jones was the beating heart of it all. What a man.”

Comedian Richard Herring said that Jones’ book about Chaucer’s Knight’s Tale “got me through my English A level”. He added: “Was just thinking yesterday (as I listened to Palin’s Erebus) what a supremely intelligent group of men Python were/are.”

“He will be missed.”

Bafta also paid tribute to Jones, tweeting a message alongside a photograph of him with Sir Michael Palin in 2016, saying they were “saddened” to hear of his death.

“Here he is receiving the Special Award For Outstanding Contribution to Film & Television from friend and fellow Python Michael Palin, at the 2016 @BAFTACymru Awards.”

The Alzheimer’s Society said they were “very sorry to hear the sad news” of Jones’ death.

“Terry had been living with dementia since 2015 and we fondly remember his support at our Memory Walks. Our thoughts go out to his friends and family,” they added.