Ian Hislop: The world is now so mad you ‘either get very gloomy or find it funny’

The Private Eye editor gives Lisa Salmon his satirical take on an ‘extraordinary’ 2022.

by Joseph Connor
in Lifestyle 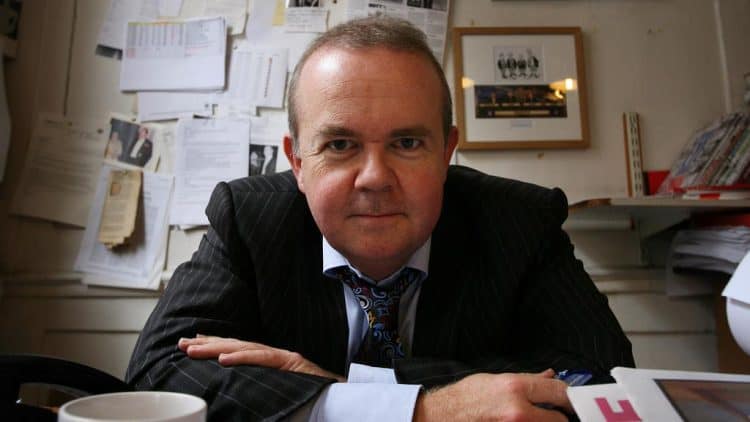 It’s been an extraordinary year, observes Ian Hislop, packed with momentous events that, for the most part, have been truly awful.

But as the editor of the satirical magazine Private Eye (private-eye.co.uk), it’s Hislop’s job to see the funny side of this dark period we’ve been living through – and boy, does he do that well.

“This year I think we’ve had more comic material than any year I can remember,” he observes dryly. “The news changed so fast, you’d think ‘That’s the funniest thing that’s happened this year’, and then something else happened.

“It’s difficult to remember when there was so much going on  – this year there’s been lots of things we haven’t seen before, and now we end the year as though it’s 1970 and the Winter of Discontent again, with a series of strikes the like of which we haven’t seen for decades.”

But it’s useful to try to see the funny side of all this misery if you can, he proposes.

“One of the reasons I think the Eye has done well this year is because I think people are very keen to have a laugh,” he says. “I think people are feeling everything’s so mad that you either get very gloomy or you find it funny.”

The journalist, who’s been Private Eye’s editor for 36 years and is also a team captain on the BBC’s satirical current affairs panel show Have I Got News For You, says he was on a train recently when a woman passed him a note thanking Private Eye for giving her something to laugh about.

The magazine’s unique take on the year’s events is pulled together by Hislop for the Private Eye Annual, which he says was particularly tough to compile for 2022 because there was so much incredible news to pack in, not least around the Conservative Party’s leadership decisions.

“That’s the big thing in politics, but the other thing is we’ve got a new monarch. Not only did we have the Jubilee, but then we had the death of the Queen and then the funeral arrangements and the queuing, and that amazingly British celebration of pomp and flattery and sincerity in an amazing mix, and then we had a new King. So it’s been an incredible year of change.”

Hislop can’t possibly mention the queuing to see the Queen lying in state without dropping in a few acerbic comments about the Holly Willoughby and Phillip Schofield queue-jumping saga: “We’re offering people special jumpers this year that say ‘Holly and Phil’ on them – special queue jumpers that you can have for Christmas,” he chuckles.

The This Morning presenters faced criticism following claims they skipped the queue for the Queen’s lying in state but their programme bosses stressed the duo attended as members of the media to film a segment for the ITV show.

The pair also acknowledged the backlash, but stressed they had “respected” the rules set for the media.

Meanwhile, Hislop is super-keen to share some of the “marvellous jokes” in Private Eye, and says: “If you didn’t see the lookalike of Liz Truss in a flying helmet looking exactly like Wallace and Gromit in flying helmets, I feel you need to see that.

“Or if you didn’t see our joke about Boris saying ‘bring your own booze’ in the middle of the party thing, and everyone just shouting ‘boooo’ at him, I think you need to see that too.

“It’s great fun for me because it means I can just sort of flash back through the year and think ‘Gosh that was extraordinary’.”

One of the most notable events of 2022 was the war in Ukraine, and Hislop recalls: “Right at the beginning we did this joke about Putin saying to one of his generals ‘You’re a peacekeeping force’, the general saying ‘Well what piece of Ukraine do you want to keep?’, and Putin saying ‘All of it’.

“It’s surprisingly true,” he says, and observes: “Most of our main targets are people telling you things that just aren’t true – like Putin saying ‘this isn’t a war, it’s just a military exercise’, and ‘this isn’t an army it’s a peacekeeping force.’

“Well no it isn’t. You get echoes of that with Liz Truss saying ‘this isn’t a budget’, and us thinking ‘it is, you know’!

“A lot of the comedy comes from the gulf between politicians telling you things, and the fact that as the public, we’re perfectly aware that isn’t true. That gives you a lot of good comedy.”

Further serious matters that Private Eye satirises are the issues surrounding climate change, with Hislop pointing out that “it’s still going on, but it got slightly forgotten this year.

“Most of the promises from Cop26 turned out to be hot air,” he says. “Cop27 everyone said, ‘Do we have to do this when there’s a war on? We want to burn oil and gas, so we’re not terribly interested in this’.

“And then there were the Just Stop Oil protesters who, to be honest, haven’t caused half as much disruption as normal rail mismanagement or useless traffic regulation,” he jokes.

The protests lead Hislop neatly to the fuel crisis, and he observes that it’s “quite extraordinary” (extraordinary is clearly his favourite word) that Britain allowed itself to become so dependent on Russian oil, then suddenly had to find new suppliers “and realising there was nothing we could do about the price increases, which are extraordinary”.

But does he think that when the Ukraine war is over, prices will go down?

“Yes, I’ve got to believe that. You have to, it’s Christmas,” he adds, wryly. “I’m believing in a) Santa Claus and b) a bright future.”