Council chiefs who were shown a video of a mum struggling to carry her disabled son up 30 stairs still refused her priority housing – because she made it to the TOP. Sharon Arkell, 38, and Richard Mikkelson, 37, live with Tommy, four, and his little sister Susie in a second-floor flat. Tommy cannot reach […]

by SWNS
in Children and Family, Discussion, Health, Lifestyle 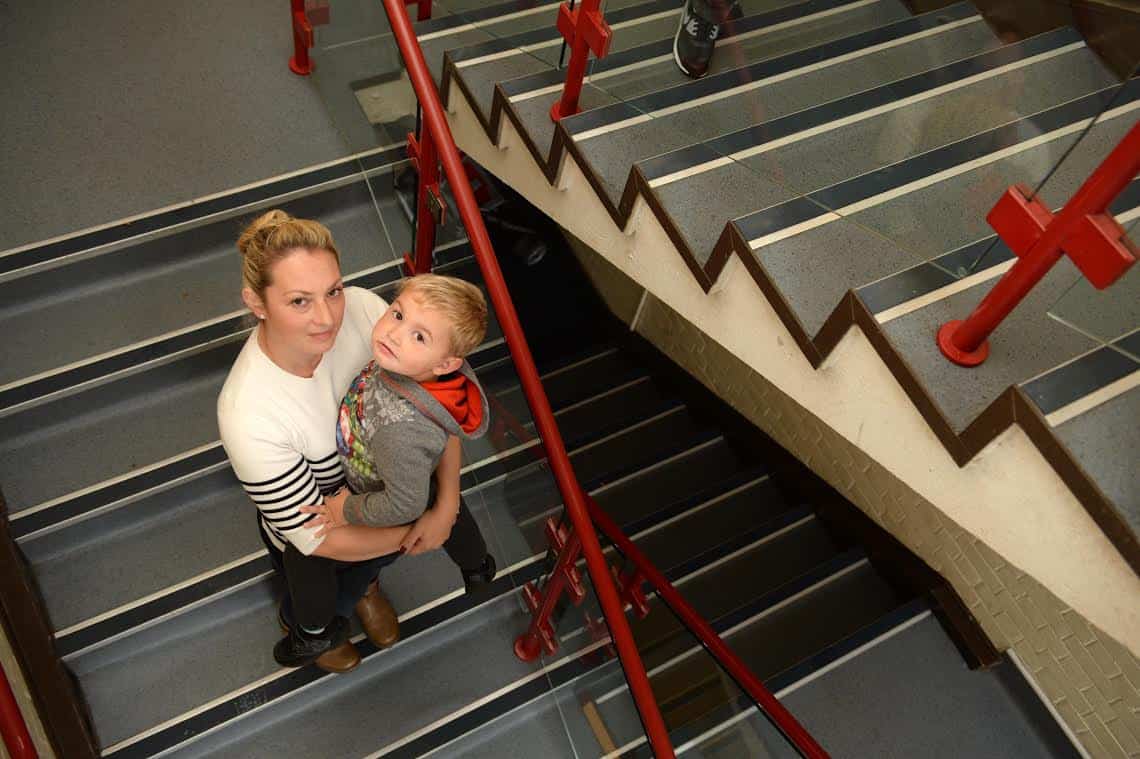 Sharon Arkell with her son Tommy, 3 on the stairs which lead to their council house. See SWNS story SWSTAIRS; Council housing chiefs saw a video of a mum struggling to carry her four-year-old with muscular dystrophy up two flights of stairs – and turned down a request for priority housing because she made it to the top. A panel at South Gloucestershire Council watched the news film of Sharon Mikkelson carrying her son Tommy up the 30 stairs to their second-floor flat in Filton as part of a hearing to decide whether the family qualified to be awarded priority housing status. Young Tommy will soon receive his first wheelchair next week as the muscular dystrophy which is already affecting his body gets worse. The family have asked to be re-homed in a ground floor flat or home, but have not been offered anything suitable.

Council chiefs who were shown a video of a mum struggling to carry her disabled son up 30 stairs still refused her priority housing – because she made it to the TOP.

Sharon Arkell, 38, and Richard Mikkelson, 37, live with Tommy, four, and his little sister Susie in a second-floor flat.

Tommy cannot reach it unaided as he suffers from muscular dystrophy, a progressive illness which means he’ll soon have to use a wheelchair permanently.

So mum Sharon carries him  while juggling shopping bags and Tommy’s little sister Susie in her pushchair. But because she made it to the top, the family’s request for priority housing was turned down.

Sharon and Richard, of Filton, South Glos., are outraged at the decision – particularly because Tommy is set to get his first wheelchair next week.

Factory worker Richard said: “We were denied a priority card at the panel meeting on the basis we are currently managing the stairs.

“They based this decision on the video we did to accompany the TV report on ITV.

“I would have thought a risk assessment would at least be required, as I would guess that would be the case for any of their employees lifting something of Tommy’s weight repeatedly up stairs.

“And I would also assume typical manual handling regulations couldn’t be applied in this case.”

He added that the scenario shown on TV featured no shopping, no school bags and no Susie bouncing around.

There was also “no putting Tommy at the top of the stairs and going down to retrieve the buggy”, no wheelchair and the conditions were dry.

Richard said these are “all factors which come into play when assessing the safety of the situation”.

South Gloucestershire Council said they are “helping the family with their current housing situation”.

They said: “The couple have bid on two HomeChoice properties in this bidding cycle and they will know the outcome of their position for this property later this week. “Although the panel hearing on October 28 concluded the couple were not eligible for a priority card, a number of factors were taken into consideration, including an occupational therapy report and information submitted by the parents.

“We have to assess people using the same HomeChoice Policy criteria, so that every case is treated fairly.

“The video was useful in considering access to the couple’s current accommodation and we have discussed providing some stair climbing equipment as an interim measure.”