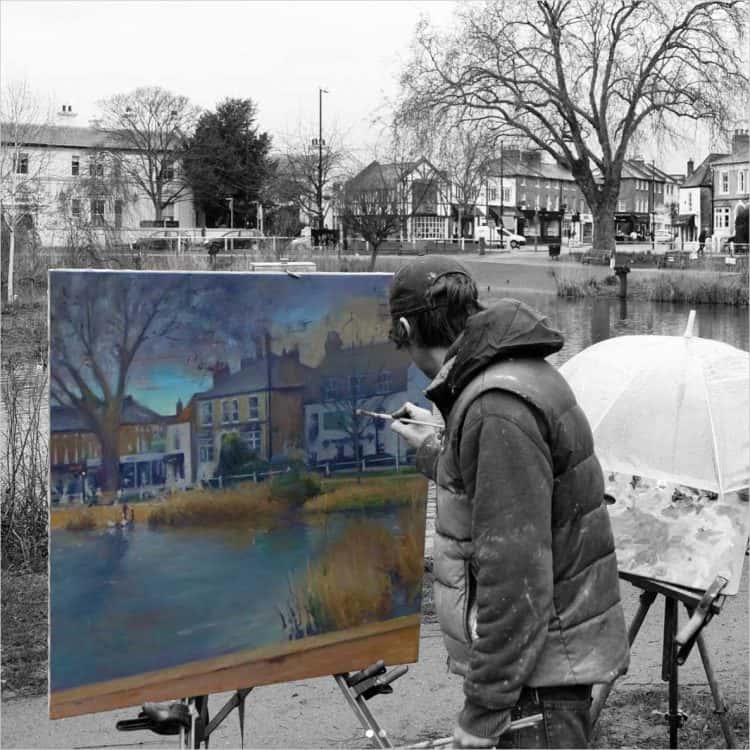 Many of today’s best known painters studied their craft at private Ateliers as opposed to Art schools. An Atelier is often based on the  teaching by one master head painter whom works one on one with students in an intimate studio setting. I feel fortunate to have spent time learning different aspects of my own style of painting from Charles H. Cecil Studios in Florence, Italy, and Paul Ingbretson’s studio in Massachusetts, in the United States. Though their approaches and training methods are different, they share a core philosophy of mentorship which I have found hugely valuable.

Charles Cecil’s atelier offers a rigorous training in the practice and tradition of drawing and painting from life. In keeping with the atelier tradition, Cecil himself follows the students work closely, working with them individually on each project. Therefore, he supervises the student’s progress from the first cast and figure drawings to advanced portraiture in oils.

The studio’s mission is to preserve and advance the figurative tradition of drawing and painting from life, and to perpetuate the atelier training so essential to its future. It also aims to impart the aesthetic and humanistic values that underlie the tradition.

The Cecil school is largely focused on portraiture. An impactful portrait offers a subtle picture of a given person’s unique characteristics and inner expression, encapsulating the core of the subject’s character. It should strike a note of familiarity while preserving a sense of mystery. That is why portraiture is a particularly demanding form of painting, and requires careful study of previous masters.

At the heart of the various skillsets which students are taught is the ‘sight‑size’ method, whereby the image and subject are placed side by side at a distance in order to perceive the whole. Having selected the chosen viewing point of the subject, the painter places their canvas on the exact location that allows the interpretation to appear side by side and 1:1 in size. This allows comparisons between subject and the painters interpretation to be made more easily.

Paul Ingbretson’s studio, by contrast, is dedicated to the learning and practice of what Ingbreston calls ‘painting the visual impression in the visual order’. Inspired by the results obtained by painters  such as Velazquez, Vermeer, Chardin, and the ‘Boston school painters’ among others. The Boston School painters were a group based in Boston and surrounding areas active at the end of the 19th and beginning of 20th centuries. The “Boston School” sought to combine a high key of chromatic colouration, harmonious composition and solid craftsmanship. It is a combination of impressionist Colour with academic  drawing – drawing skills taught in the 19th century French academies.

All of these painters placed a high value on technical skill, accurate visual representation, and classical beauty. The original Boston School artists, such as Edmund C. Tarbell, Frank Weston Benson, and William McGregor Paxton, were admired for their dedication to craftsmanship and beauty at a time when modernists were challenging traditional artistic values.

At his studios Ingbretson seeks to instill this appreciation in students through close mentorship, which goes beyond merely teaching classes. The atelier systematically teaches the tenets of fine painting typical of the training in Paris prior to the Twentieth Century. Moreover, students are encouraged to dive into the philosophy of painting and directed towards key literature surrounding the art.

Today, there are many ateliers around the world which are open to students of all ages, upskilling painters and teachers who both excel as artists in their own right and seek to perpetuate the atelier tradition themselves.

I often wonder what would happen if traditional art instruction fizzled out of existence – if the skills and techniques of prior generations were not cultivated and passed down to the next. Great artists of the past followed techniques that could easily have been lost in the mists of time, were it not for a number of contemporary artists taking action and passing on instruction.

Rembrandt, Valezquez, Van Dyck, Gainsborough, Reynolds and Sargent were all portrait artists whom had a belief in the value of truth in beauty, leaving us with a fascinating insight into the characters they painted and the times that they lived, as well as some exceptional works of art.

That is why it is so important that every generation strives to stand on the shoulders of giants. It is often said that behind every famous artist lies a famous atelier.

Oliver Maughan is a London based landscape painter who studied in Florence at the Charles Cecil studio before training with American painter Paul Ingrebreston. Oliver Maughan only works directly from life and has focused most of his work on pictures of the Thames and other English natural landmarks.