Andy and Sara Mott face spending Christmas Day in their car after their domer bungalow was flooded following 'biblical' rainfall in November. 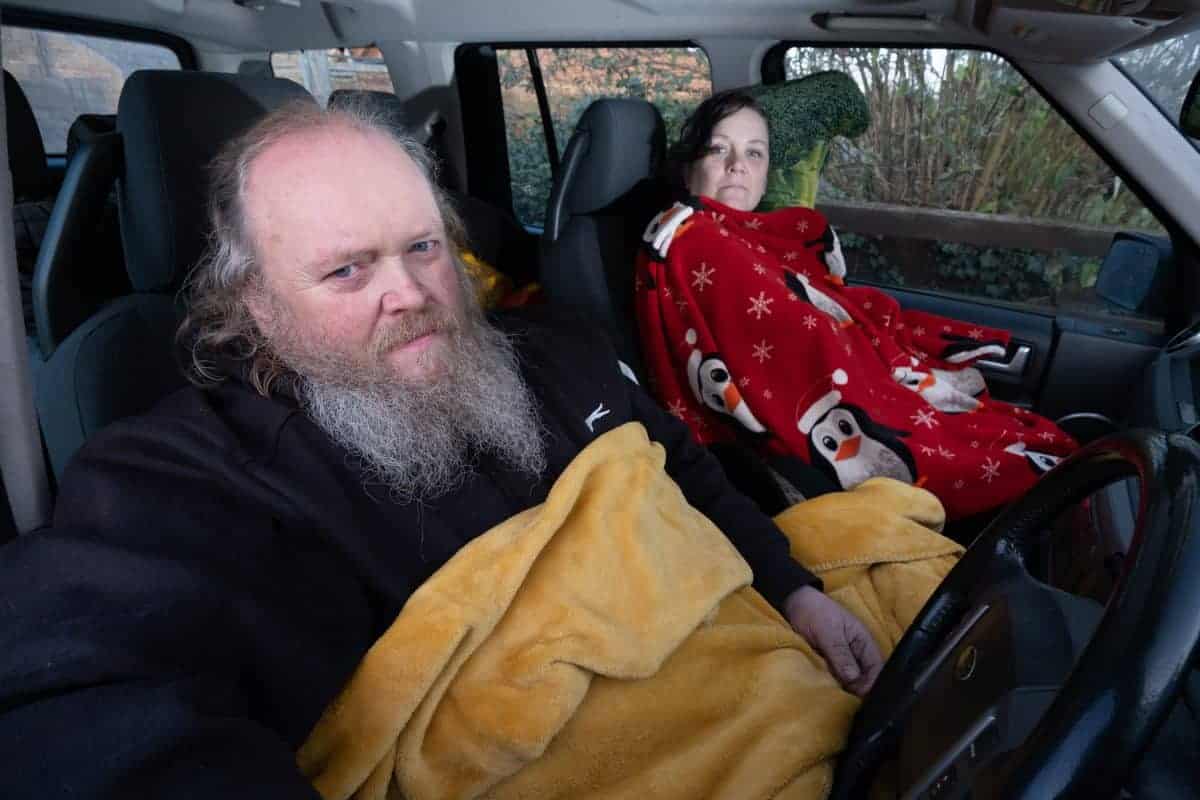 A couple who were forced to flee their house during killer floods last month face spending Christmas Day in their car.

Andy and Sara Mott have been living in a Travelodge for the last five weeks after their domer bungalow was flooded following ‘biblical’ rainfall in November.

The couple, who live in Fishlake, with their 20-year-old daughter Emily, have been told it could be at least April before they can move back into their house.

They hired a caravan from a local company which was delivered two weeks ago, but it has no energy supply or a ramp for wheelchair-bound Andy, who lost his leg in a motorcycle accident in 1992.

“We are going through hell”

Andy, 58, and Sara, 49, were hoping to be in it for the festive period as the hotel they are staying in shuts on Christmas Day.

But now they face the prospect of sleeping in their family Land Rover as it looks like the caravan may not be habitable in time.

Sara said: “We are going through hell. It’s been very traumatic. I just want to get some sort of normality back to life.

“The staff are amazing at the Travelodge and can’t do enough to help, but I wanted to be able to get back into the caravan and get the family back and have a normal life.

“I just wanted everybody back together, that is my goal, but there just always seems to be something from stopping it.

“If we have to stay in the car at Christmas, it will be awful.”

“It’s just been a nightmare”

The couple, who have three other daughters – Rebecca, 20, Stephanie, 29 and Eleanor, 23 – say there no room to stay with family as they cannot cater for Andy’s wheelchair.

Andy added: “Hopefully we can be in the caravan because the hotel is shut on Christmas Day.

“If not, we’ll end up in the car as we’ve nowhere else to go.

“We had a lot of trouble getting it in the first place, we paid for it, but the company went bust and it didn’t look like we were going to get one.

“It’s just been a nightmare.”

Water destroyed the ground floor of the family home when the River Don burst its banks last month during the worst floods in decades.

Thousands of people were evacuated as homes and businesses across northern England were destroyed and Derbyshire’s former High Sherriff Annie Hall was swept to her death by floodwater.

The couple lost sentimental items, such as gowns from all four of their daughters’ christenings, baby photographs and keen musician Andy’s recordings.

They were also forced to put their beloved pets – two dogs and four cats – into kennels and a cattery until they are able to move back home.

Sara explained she and Andy had to go to a Travelodge because they didn’t have anywhere else to go.

She said: “I found it really, really stressful when we were first flooded.

“Having the family separated was awful and I had to go to the doctors because I couldn’t sleep.”

The family’s misery was compounded when Emily’s Suzuki Jimny and Andy’s Nissan Elgrand and Harley Davidson tricycle were written off.

Thankfully, police were able to move Sara’s Land Rover from their drive before it could be destroyed by water, but they have been left with just one vehicle between three of them.

Sara, who provides non-medical support to women during pregnancy, has been unable to take on any work as she lost all her equipment and books.

She added: “The Saturday after we were flooded, I was supposed to be going out to see a client which I couldn’t do.

“I have lost everything that I use for work and we need the car for Emily to get to work and to get to doctors appointments.

“That trike was Andy’s pride and joy. It’s just devastating.

“We’d be sat in the hotel really down and the TV news kept showing our house, which hurt us.

“It’s the sentimental things we can’t get back that hurt the most.

“It makes you feel quite sick, you get attached to things and it’s the memories that come with it.

“We have a grandson who is autistic and when he comes to stay, he has a stuffed hammer head shark he likes cuddling. We’ve lost that and it will break his heart when he realises it isn’t there.

“It really is heartbreaking, it’s like you’re grieving. You’ve got your memories, but you’ve lost things that mean so much to you, it really hurts.”

Related: Removing lead from petrol may have sparked decline in dementia cases