Feminist theologian Dr Niamh M. Middleton, author of new book Jesus and Women: Beyond Feminism, says that the Roman Catholic Church will lose all its female practitioners within two decades, and will become extinct within a generation, unless it takes urgent steps to address inherent gender-based discrimination. 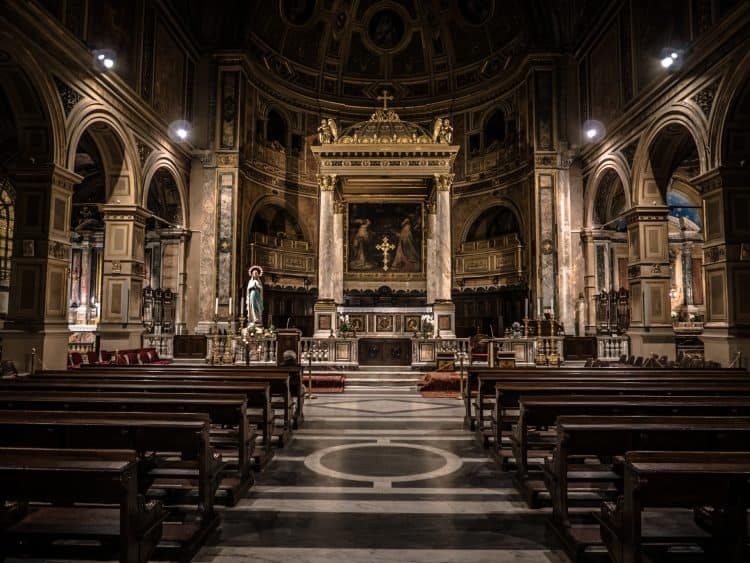 The Roman Catholic church will become ‘women-free’ in Britain and Ireland within 20 years and die out completely within a generation unless it reverses its “sexist and unbiblical” policy that only men can become priests and bishops, a leading academic and theologian has warned.

Worshippers are already said to be turning their backs on Catholicism “in their droves” in response to its views on women’s rights, LGBT rights and contraception.

But the Vatican’s ongoing refusal to recognise women as spiritual equals will reduce congregations to “elderly, pious men and no one else” within two decades.

Unless it revokes the doctrine, the Church will struggle to attract new followers and will become ‘extinct’ in Britain and Ireland by 2050, Dr Niamh M. Middleton of Dublin City University predicts.

Dr Middleton, herself a practising Catholic, said: “Women have been leaving the Catholic Church for decades as a direct result of its antiquated and discriminatory views, and because of repeated sex abuse and financial scandals involving its male leaders.

“Catholic women object strongly to having a celibate male priesthood marked by such scandals dictating their sexual behaviour to them, especially in relation to contraception.

“By preventing women from joining its priesthood—and only creating ‘jobs for the boys’—the Church has cemented its position as an old-fashioned institution that is out of touch with the modern world.

“Unless and until it treats women equally, the number of women in congregations—and by extension their friends and families—will continue to fall at an alarming rate, leaving only the most elderly, pious men and no one else.

“Based on my estimates, I would say the Catholic Church has 30 years of life left in it, and only 20 within women.”

But the Vatican’s ongoing refusal to recognise women as spiritual equals will reduce congregations to “elderly, pious men and no one else” within two decades.

According to the Vatican, women cannot be ordained because Jesus willingly chose only men as his apostles.

Whilst they are said to do “many other things better than men”, and have recently been given more powers during Mass, Pope Francis has ruled out a woman from ever joining the priesthood.

Any Catholic priest who ignores the ban and ordains a woman will be sacked and excommunicated.

Dr Middleton says only a radical restructure of the Church’s leadership will repair its credibility, arrest the dramatic decline in parishioners, and persuade more women and families to return to worship.

Not only must the Vatican revoke its position on female priests, but it should also install more women than men in positions of authority

This, says Dr Middleton, should be on a temporary basis so that women can guide the reform of institutional Catholicism to the point that equal male and female authority within the Church is established.

Now is the “ideal” time for the Church to reconsider its values because many ageing male priests are on the cusp of retirement.

There are a substantial number of experienced female worshippers who are currently waiting in the wings to fill the void amid a dearth of younger men willing to join the Church.

Dr Middleton says there is a “tsunami” of support toward the integration of more women priests, and subsequently bishops, and also claims many senior male leaders would back such reforms.

She is now urging the Pope to establish an international panel of female theologians to produce a clear roadmap for the Church’s future.

Her recommendations are set out in ‘Jesus and Women: Beyond Feminism’, a new book that examines Jesus’ pro-views of women and includes insights from religion, evolutionary biology, and the #MeToo movement.

Despite the Vatican’s views, the Bible depicts Jesus as favouring equality of the sexes, unheard of in a time when the fiercely patriarchal Jewish society treated women as the ‘second sex’.

Further evidence of his radical attitude towards women can be seen in his large number of female disciples and wide use of female metaphors in his teachings, showing he understood and appreciated women.

And while Jesus couldn’t appoint a woman as one of the 12 apostles due to the dangerous social backlash it would have created, some theologians consider the disciple Mary Magdalen—said to have been the first person to encounter Jesus after the crucifixion—to be the “apostle to the apostles” and the embodiment of the Church in the first few days of Jesus’s resurrection.

After Jesus’s death, the early Christian church allowed women an equal role in conducting worship and the performance of sacred rituals, such as supervising the Eucharist.

Dr Middleton claims this has in turn fuelled increasing abandonment of the Catholic faith in recent decades and the transition to a secular, atheistic society, with a ground-breaking change in structure the only route to sustainable longevity.

If the Church recognised and endorsed women as equals, it would only be a matter of time until it also approved the use of contraception, she added.

Dr Middleton, who was a lecturer in theology and philosophy at Dublin City University until taking early retirement earlier this year to write Jesus and Women, said: “The only way to save the Catholic Church from medium and long-term collapse, not only Ireland and the UK but around the world, is for the Pope to allow the ordination of female priests and bishops.

“It should also focus more on the person of Christ, with emphasis on his treatment of women so that Catholics will be able to distinguish between institutional Catholicism and authentic Christianity.

“This would give women and their families an incentive to return to the church because they would feel less isolated and more equal.

“The outcome would be a more robust, inclusive Catholic Church that has the potential of surviving well into the next millennium.”

Jesus and Women: Beyond Feminism by Niamh M. Middleton is available now in hardcover via The Lutterworth Press, priced £50, and for pre-order in paperback, priced £20. For more information visit www.niamhmiddletonauthor.com.