With Compassion (formerly Compassion London) has launched a Christmas campaign to serve anyone who needs a meal, from two specially marked food trucks. 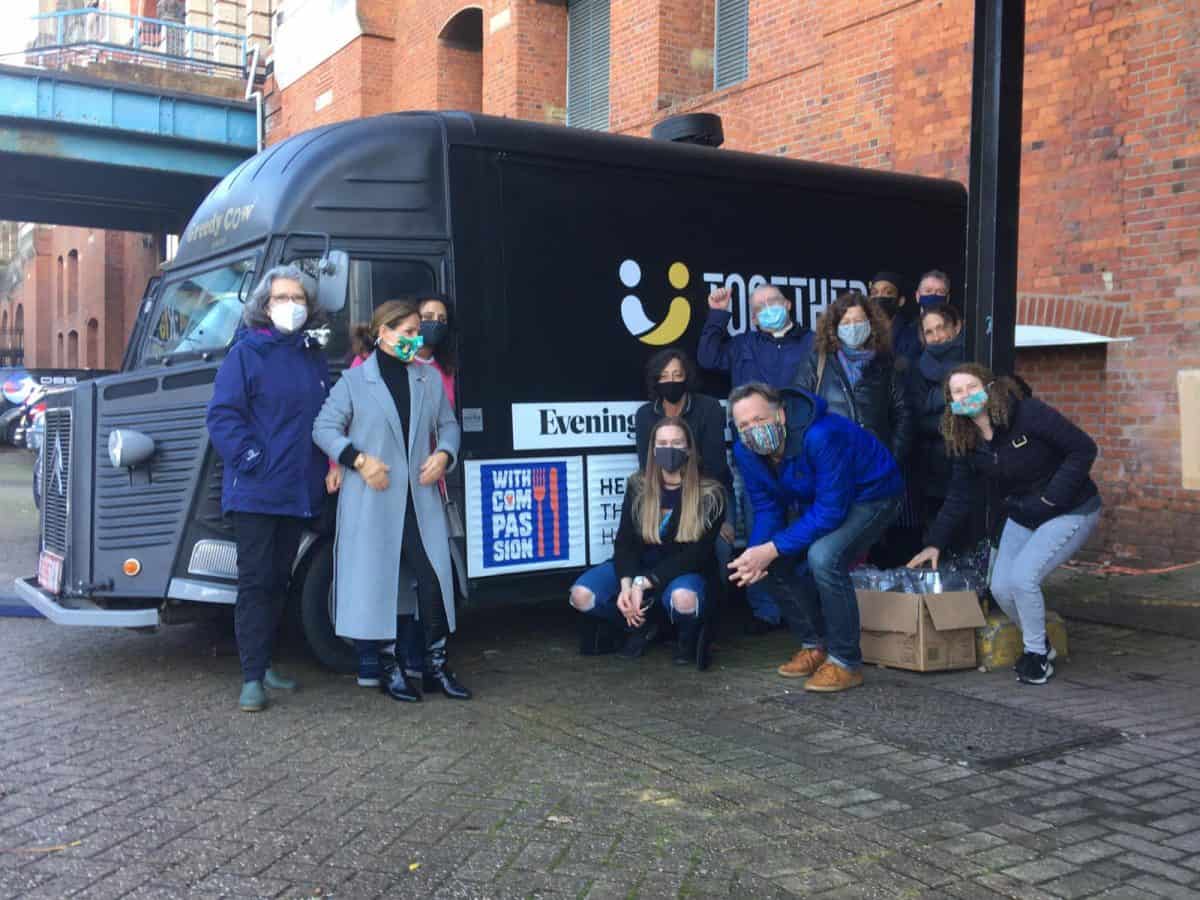 A charity that has made and delivered almost half a million free meals during the pandemic has launched a new scheme today to feed hungry Londoners from two donated food trucks, dispensing meals prepared entirely by volunteers around the capital. With Compassion (formerly Compassion London) has kicked off a Christmas campaign with the Evening Standard to serve anyone who needs a meal. Two black cabs, which will be giving away coffee and teas, have also been converted for its use.

The food will be prepared in the organisation’s new community kitchen – its fifth since the Covid-19 pandemic outbreak – at London Scottish House near Victoria Station. On Friday it closed the doors of its last free kitchen, a sprawling series of rooms in the basement of Alexandra Palace between Wood Green and Muswell Hill.

“I can’t believe it’s only been seven months since we started doing this, with all the meals we’ve done in that time,” said With Compassion founder Leon Aarts, in an update to volunteers. “This is a huge opportunity to lay more connections and to do even more than we are already doing.”

One out of every ten people in the UK will suffer from food insecurity during the pandemic, according to the Food Standards Agency. Many rely on food banks or other charities. A petition last month asking the government to provide free school meals garnered more than one million signatures.

Aarts, who formerly worked with refugees in Calais, is the brainchild behind With Compassion, which gets donations of food from companies such as The Felix Project, Hello Fresh, Edible London, and Ocado to make individually packaged meals, all prepared by volunteers from food donations. Cash donations are used to purchase necessities such as food containers and cooking oil.

“It’s very exciting that we have lots of people who support us. But it’s even more exciting that we achieved everything together, thanks to the great work we have done over the past couple of months,” said Aarts. “This is definitely a team effort.”

One day the team might make hundreds of servings of ratatouille on a bed of couscous; the next day they might prepare salmon and vegetables over pasta with a cream sauce, or fried chicken on a bed of mixed salad. The chefs, some of whom are furloughed professionals, think up innovative menus based on ingredients they are given.

Things will be a bit different with the trucks. Some of the food, such as stews and curries, will be prepared beforehand in the new kitchen, while accompaniments such as rice and pasta will be prepared onsite inside the actual trucks, Aarts said.

His number two, Brad Seiler, was formerly the owner of London’s second largest chauffeur company, but calls himself a “profoundly obsessed chef and cook”. He volunteered his cooking and organisation skills to With Compassion when the allure of sitting at home with nothing to do wore off – on the second day of the first lockdown.

“Part of being a human being in a civilised western society to enjoy eating a meal,” says 58-year-old Seiler. “It’s a fundamental right. Our remit is to make it as pleasant and as palatable as possible.

“I love what Leon has done. He doesn’t do it for personal gain, which at the risk of sounding slightly judgemental, is what most people do it for. It’s lovely that he doesn’t. Our duty is to do whatever we can to provide these meals.”

All walks of life

With Compassion volunteers come from all walks of life, and include journalists, university students, interior designers and even an opera singer. Some lost their jobs because of the pandemic and some work part-time, while others find time in their busy schedules to help out.

Volunteer Patricia Bilkus, a freelance accountant, has been volunteering for With Compassion regularly for several months. “When you are doing fine yourself, when you are not affected very much, you need to do something,” said Bilkus, 54. “You think: ‘God, look around me, I am so privileged and lucky. I have to give back.’ It’s like a call to arms.”

Henry He, 30, worked in immigration for three years in the UK after getting a degree in sociology, then went back to his hometown of Xian in China. “I had a depression and anxiety problem, so I decided to move back to London. For most of the days I was just sitting in the park near Alexandra Palace and doing meditation to calm down my mind,” said He, who is now unemployed.

One day he asked a park security guard if he could volunteer to pick up rubbish. The guard asked He if he’d like to help prepare food, and he’s been volunteering for With Compassion several times a week since.

“It has been very good for me. Talking to people and doing something is very important for my recovery process. I enjoy it, especially having conversations in the kitchen,” said He, who will continue working in Victoria. “The essential cause is to feed the hungry, and having that in the background of my mind helps – being part of an organisation that has meaning and significance.”

Rebecca Matthews, 38, was made redundant from a wine company earlier this year. She wanted to ensure her free time didn’t go to waste. “Unlike previously we will be able to now serve the food hot, meaning no one misses out on a hot meal, and we can continue to work towards our mission of no one going to be hungry.”

For Aarts, the new food trucks will eventually allow volunteers to give a more personal touch to the meals they serve. Previously a fleet of drivers delivered the food to recipients. “We can do so much more from the food truck. We will be giving out hot delicious meals and we’ll have that person contact, even for a short time, with the people who eat the food.”

With Compassion will also get some support from celebrity chefs, although it has not yet disclosed who they might be. It is also planning to sign a lease on a permanent kitchen in the spring in connection with The Phoenix Project, a charity designed to help both adults and children in times of crisis.

“These new changes will help us deliver more meals to those who need them, and gives us the opportunity to keep growing as a charity,” Aarts said.

“Giving someone a hot, nutritious and delicious meal which is cooked right in front of you is an act of compassion. In times like these we can’t necessarily take someone’s problems away but we can show them that we care and that we support each other. Showing kindness and compassion through food lasts longer than it takes to eat the meal.”

For further information, or to volunteer or donate, visit With Compassion’s website.

This article was amended on Monday 16th November, 2020.