Student Dane Nash’s diet is totally bananas – he eats up to 150 of the fruit A WEEK. The 21-year-old starts every day with a smoothie made of TWELVE nanas and downs up to 10 more throughout the day. He gets 80 per cent of his calorie intake from the tropical fruit, with most of […] 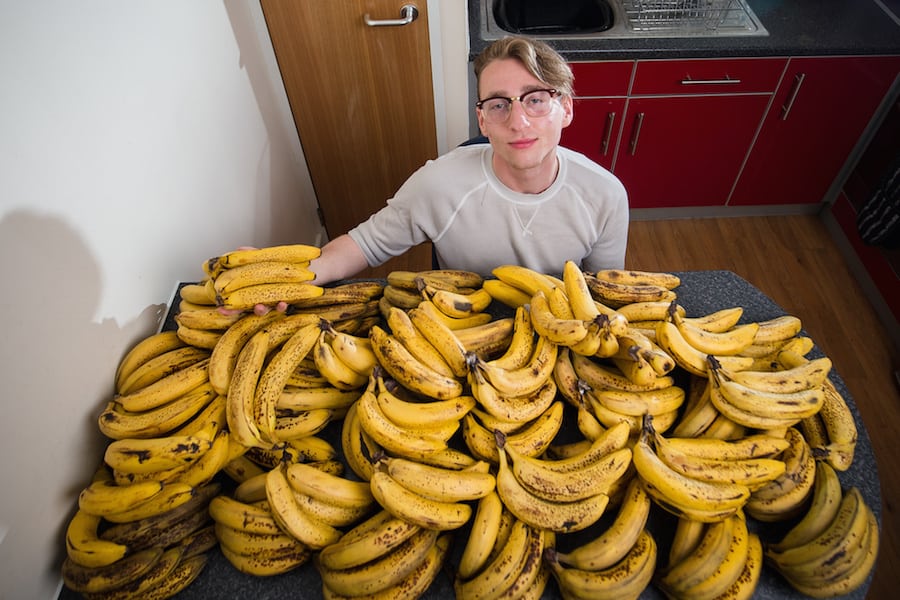 Student Dane Nash’s diet is totally bananas – he eats up to 150 of the fruit A WEEK.

The 21-year-old starts every day with a smoothie made of TWELVE nanas and downs up to 10 more throughout the day.

He gets 80 per cent of his calorie intake from the tropical fruit, with most of the rest coming from spinach – of which he consumes more than 2lbs per day.

Dane follows a strict ‘raw vegan’ diet – only uncooked fruit and vegetables – which costs him around £160 per month.

Dieticians have warned him that his fruit intake is a yellow peril because his diet lacks variety and key nutritional ingredients.

But Dane, who studies at the Bristol Institute of Modern Music, says he is healthier than ever and has no plans to change his banana intake.

“Bananas are the best way to go,” he said. “They’re the best tropical fruits that are readily available in the UK.

“This diet has helped me a lot in taking control of my health and my life, and I’m now healthier than ever. I cannot recommend it enough.”

Dane, who is 6ft 1ins and weighs 12st 6lbs (79kg), first went vegan two years ago after suffering from acne.

He added: “I went vegetarian first, and then I read a bit more into it and realised that the optimal diet for humans is to eat raw fruit and veg.

“Every other species eats their food raw, but humans for some reason started to cook our food, and it’s not really that good for us.

“For the last five months or so I’ve been on a completely raw diet – with only one or two slip-ups, with things like rice,” he added.

Dane, who lives in central Bristol, bulk-buys four or five 18kg crates of nanas every month. His morning smoothie includes half a pound of spinach.

He occasionally adds spirulina to his smoothies, which he claims contains almost every nutrient a body needs and is over 60 per cent protein.

Dane then crams in as many leafy greens as he can throughout the day – including 2lbs of spinach before 4pm – as well as a range of colourful fruits including berries, pears and oranges.

His typical dinner consists of a “huge” salad, including two heads of lettuce, two big bags of mixed leaves and a range of fruits, drizzled in an avocado dressing.

All of this gives him a total of around 3,000 calories per day.

“You can basically eat as much as you want until you get full,” said Dane.

He said the best time to eat bananas was when they were fully ripe.

“They should be brown and spotty. They should almost look like they’re about to go off,” he said.

“When they’re like that, they’re the sweetest that they can be, and they’re soft as well.”

He supplements his diet with Vitamin B12 – found in most meat and dairy products – as well as a flaxseed and Vitamin D supplement to provide fatty acids and omegas.

But Lucy Patterson, a Nutritional Therapist at Southville Nutrition Clinic in Bristol, said his diet lacked some staple nutrients.

She said: “This is certainly an excessive amount of bananas.

“This will be giving him a large carbohydrate intake, with each banana containing around 27g carbohydrate, meaning a day’s intake will be around 567g.

“This could contribute to disrupted blood glucose levels, and possibly put him on the road to pre-diabetes in the long term.

“Without any animal sources or indeed plant sources, he is also at risk of fat soluble vitamin deficiencies from a lack of vitamin A, D, E and K.”

She added: “There is a healthier way to eat a vegan diet, but unfortunately this person is missing some significant aspects of it.”

However, Dane insists that his diet, and the accompanying supplements he takes, is “perfectly healthy and suitable for humans”.

And when asked whether there are any cooked foods that he misses, he said: “I used to be a huge fan of chips – they’re just so good.

“But the cravings do go really quickly. Once you’ve worked out how much you need to eat to get the right amount of calories, you should feel absolutely fine.”