Sutton and Sons, a traditional Cockney chippy, has relaunched their shop and reckon they are the capital's first vegan chippy. 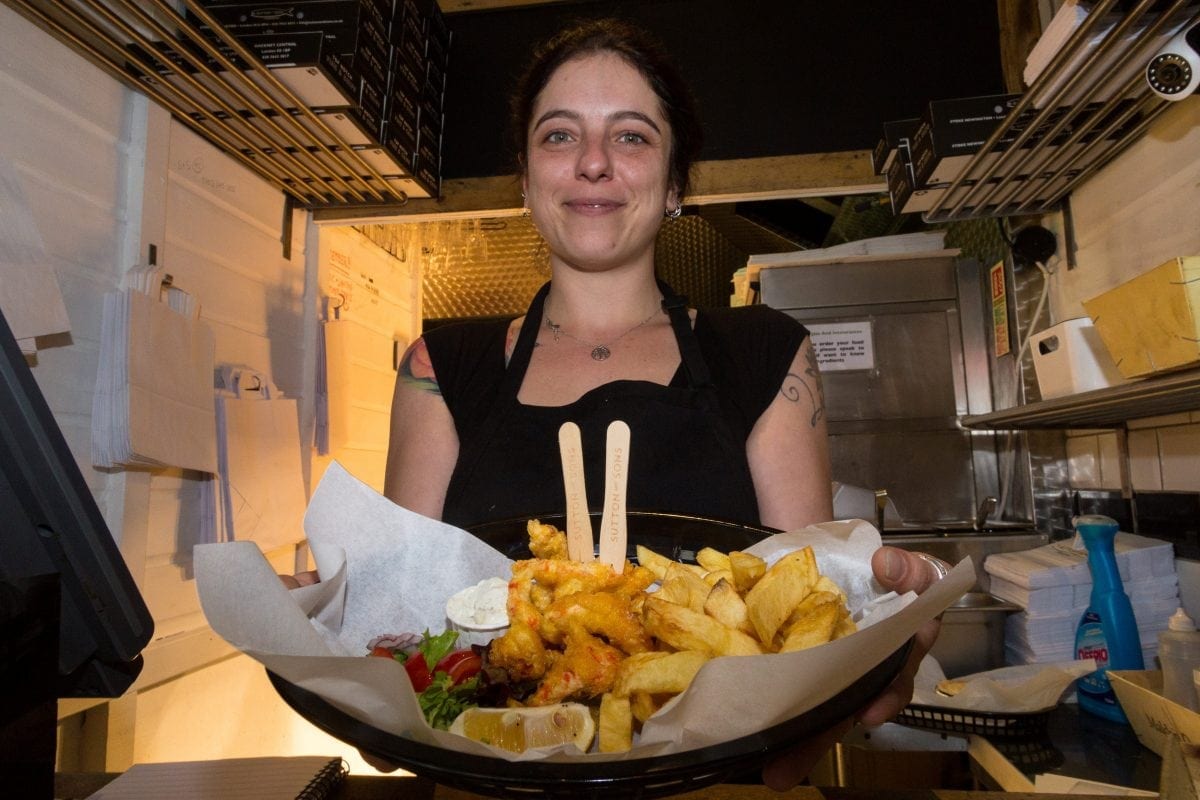 A traditional chip shop has changed their menu and gone completely vegan – selling ‘fish’ made out of BANANAS.

Sutton and Sons, a traditional Cockney chippy, relaunched their shop last week, and reckon they are the capital’s first vegan chippy. 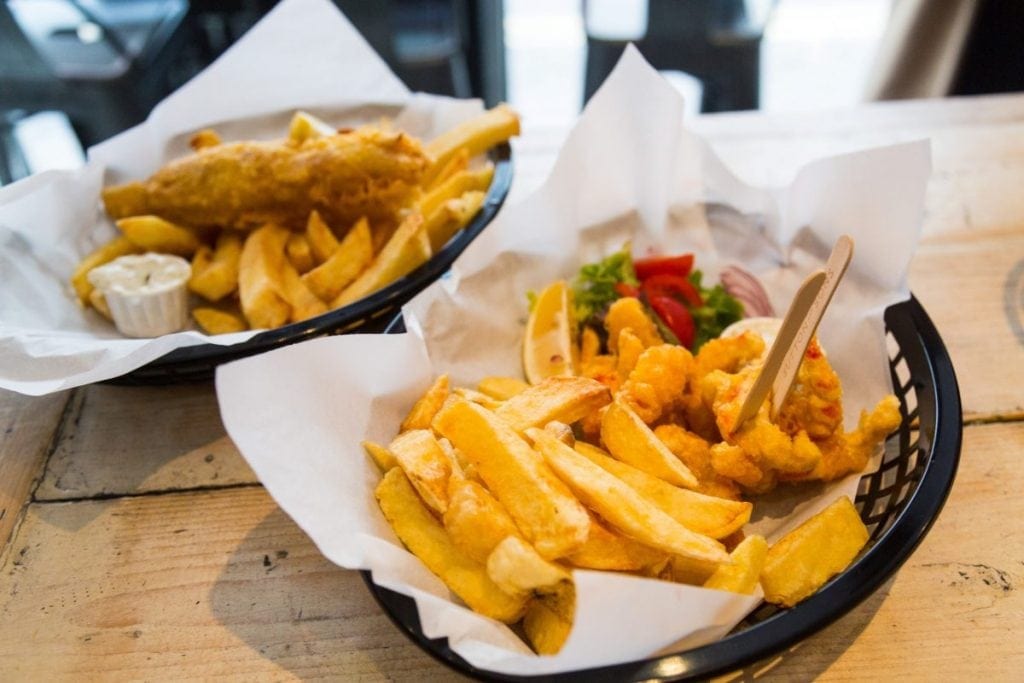 Their best-selling ‘fish’ is made from the ‘blossom’, or leaves of the hanging part of the banana plant – for the price of £7.50.

The artichoke-like blossom resembles a fish texture when fried, and is marinated in a special sauce to create a distinctive flavour.

A ‘fish taste’ is created by spicing the plant with cumin and garlic powder and then frying the blossom in an egg-free batter.

Manager Arianna Bonesso  has been with Sutton and Sons for two years. 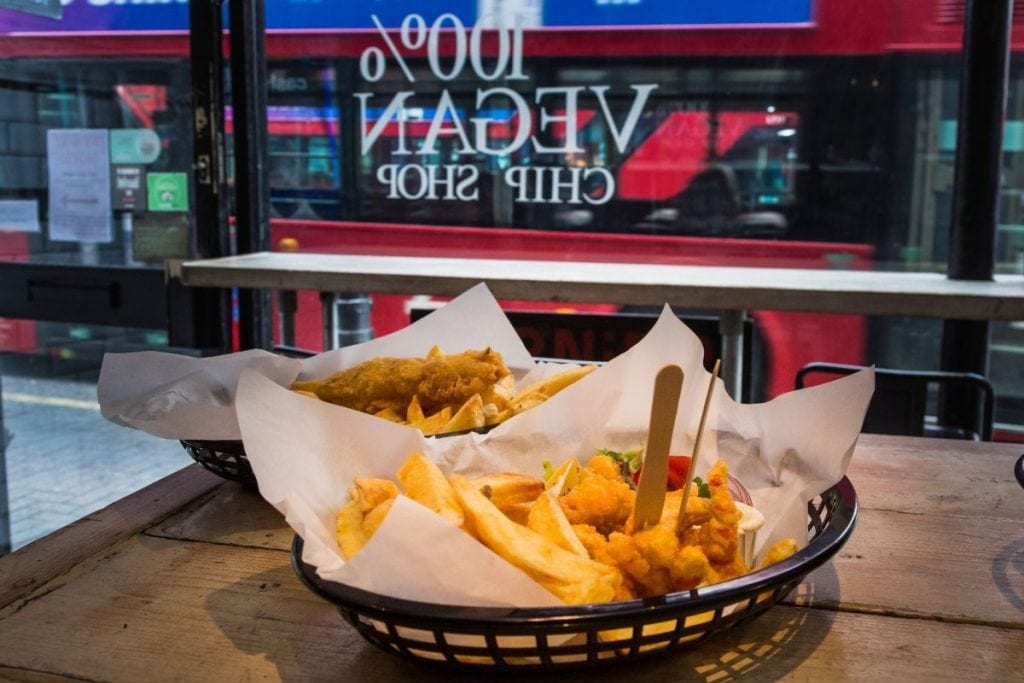 The 29-year-old said: “It started as a joke addition to the menus – and then it got out of control and here we are.

“This is part of a vegan revolution in food – I can feel a change is coming.

“Our food is lower in calories and it is good for the environment – this was part of the idea behind it.”

Arianna explained how specific you have to be when cooking vegan replicas of meat and fish. 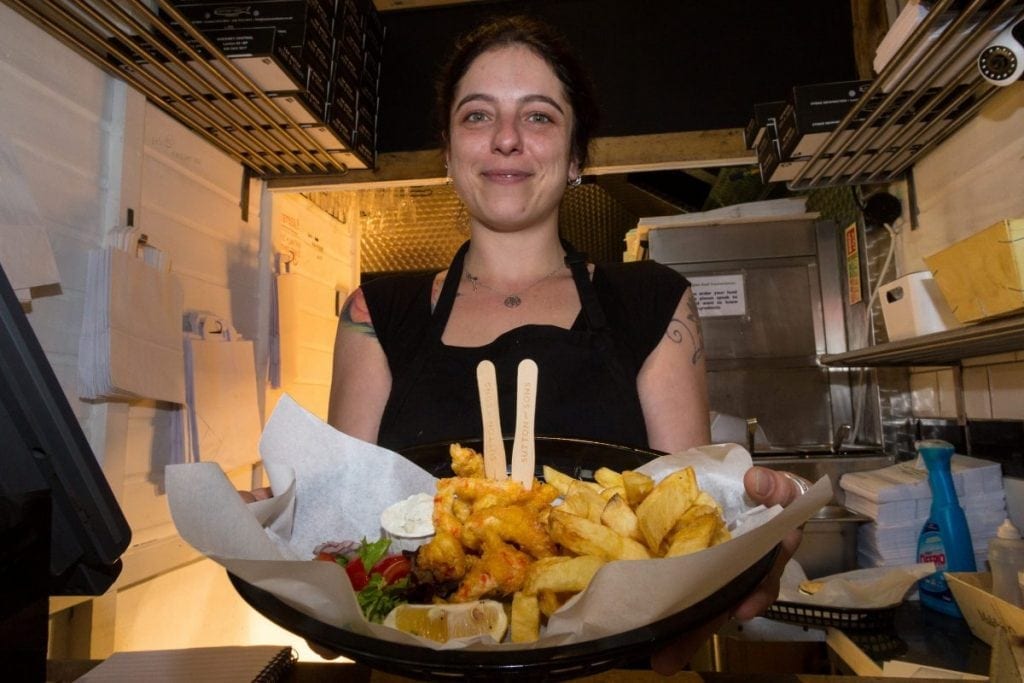 She said: “Danny was in a market in Vietnam and he noticed the blossom – he introduced it to the menu and here you go.

“Many people use tofu as a replacement for fish, but you see this is too squidgy.

“We tried 100 recipes before we decided on one to go with for the ‘fish’. 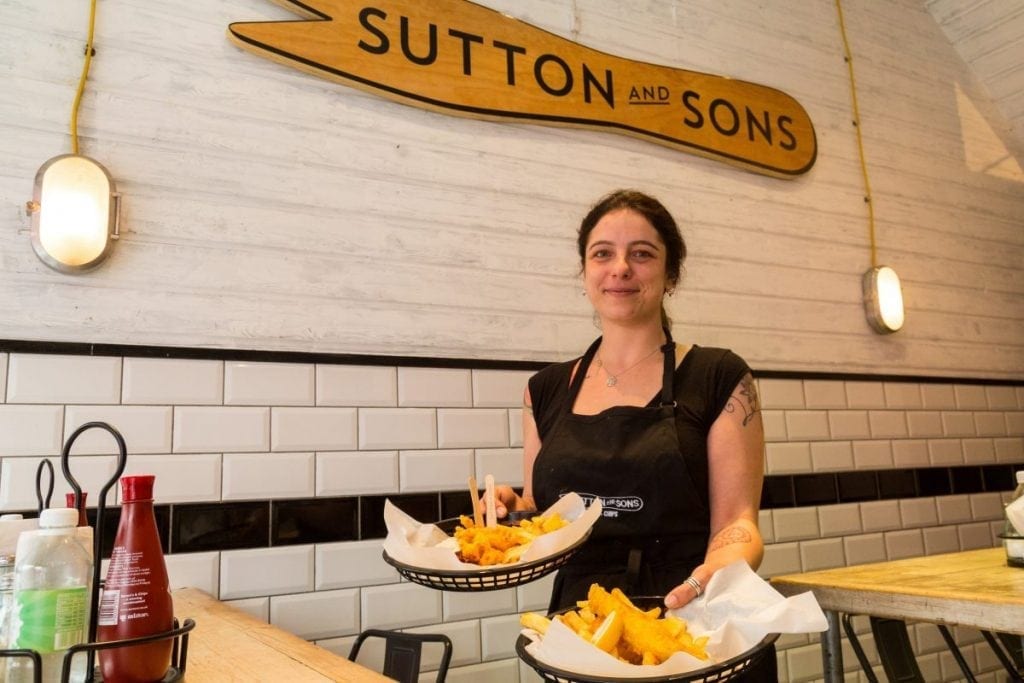 “People can’t tell the difference – even if they’re experts, it has converted some of them.”

Open from 12 to 10 pm, the Hackney chippy attracts a wide range of customers – and they’re not all hipsters.

Arianna said: “We’ve had some people come in and demand a sausage, or specifically a ‘dead pig’.

“Mostly the reception has been fantastic, we had an elderly gentleman come in and ask for shark – he ended up trying the blossom.

“He walked out saying he loved it – imagine that, from shark to a plant.

“People from all over London have come to try our food.”

The menu includes an item known as the Joe Blake – a mushroom and ale ‘steak’ pie served with chips.

Some customers go for the fried ‘prawn’ – dubbed ‘vampi’ – that resemble the ‘exact texture’ of a real one.

It comes with home-made dairy free tartar sauce, and is commonly served with ‘Bohemian Pilsner.’

Terry Pittman, 54, tried the vegan fish and chips for the first time. 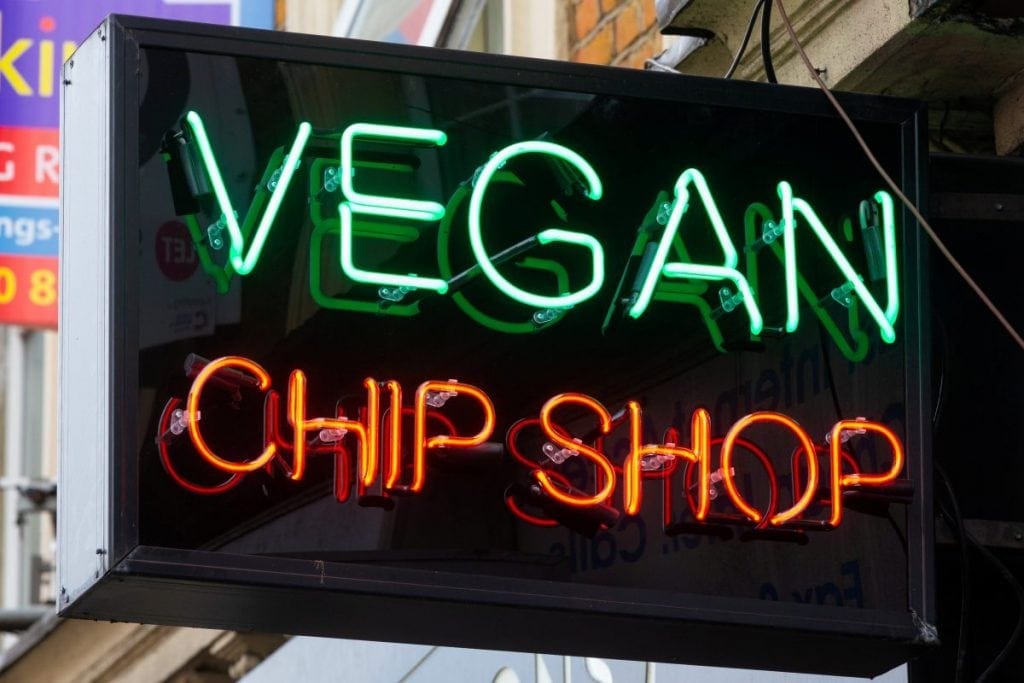 He said: “It was alright, I thought the prawns were the best though – they are the exact same texture.

“I could eat those all day, while the fish had the texture but it didn’t really convince me.

“Now it wasn’t unpleasant – if I happen to pass by I will go in their because I know that it’s good.”

Owner Danny said: “There’s no fish in our fish – we thought we’d produce something vegan and see how it goes and it went really well.

“We have now introduced a full menu – our fish is also one of your five a day.” 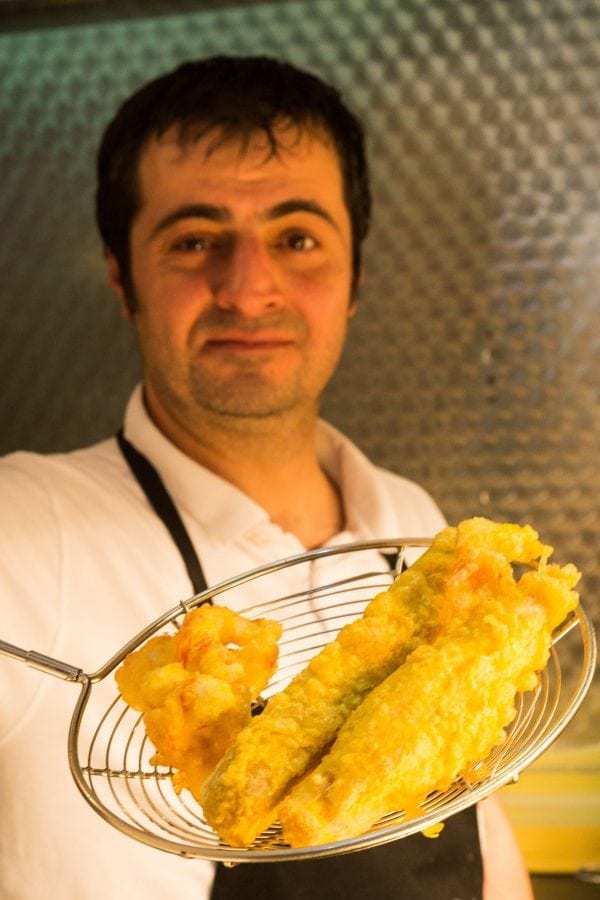 Other items on Sutton and Sons vegan menu include battered sausages and ‘vish burgers’ using soy protein and homemade sauces.

Danny said he did not know what to expect at first, but was pleased by the popularity of the vegan menu since its launch on September 4.

He launched the new menu after trying veganism for a month – and after the success of his ‘Veganuary’ specials in January.

Danny claimed his reasons to try veganism was to experiment with new ingredients and remain competitive on the high street.

Head chef Eddie Macit has been working at Sutton and Sons for 27 years. 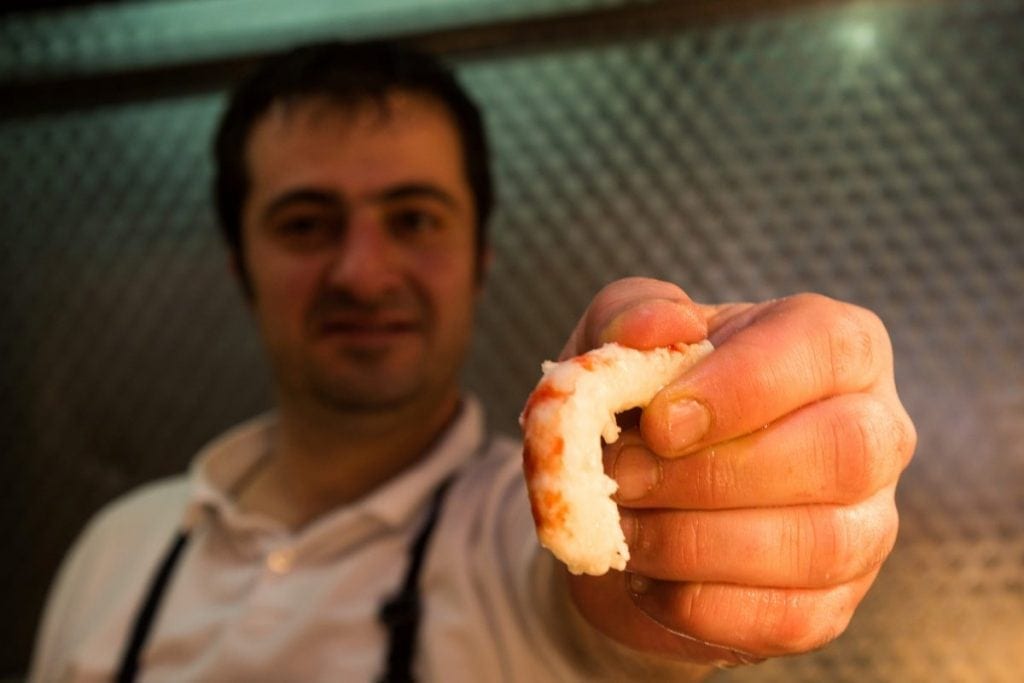 The 41-year-old said: “This is a real family run operation – I’m excited about this direction.

“I’ve been cooking since the age of 14, I’ve done everything from a sous chef to a chippy.

“I had a passion to do something different after so many years.

“Now I can’t say I’m completely a vegan – the missus would get upset.”