From next Tuesday Thurston Butchers will begin selling products from THIS, a West London based company producing 'the world's most realistic meat alternative'. 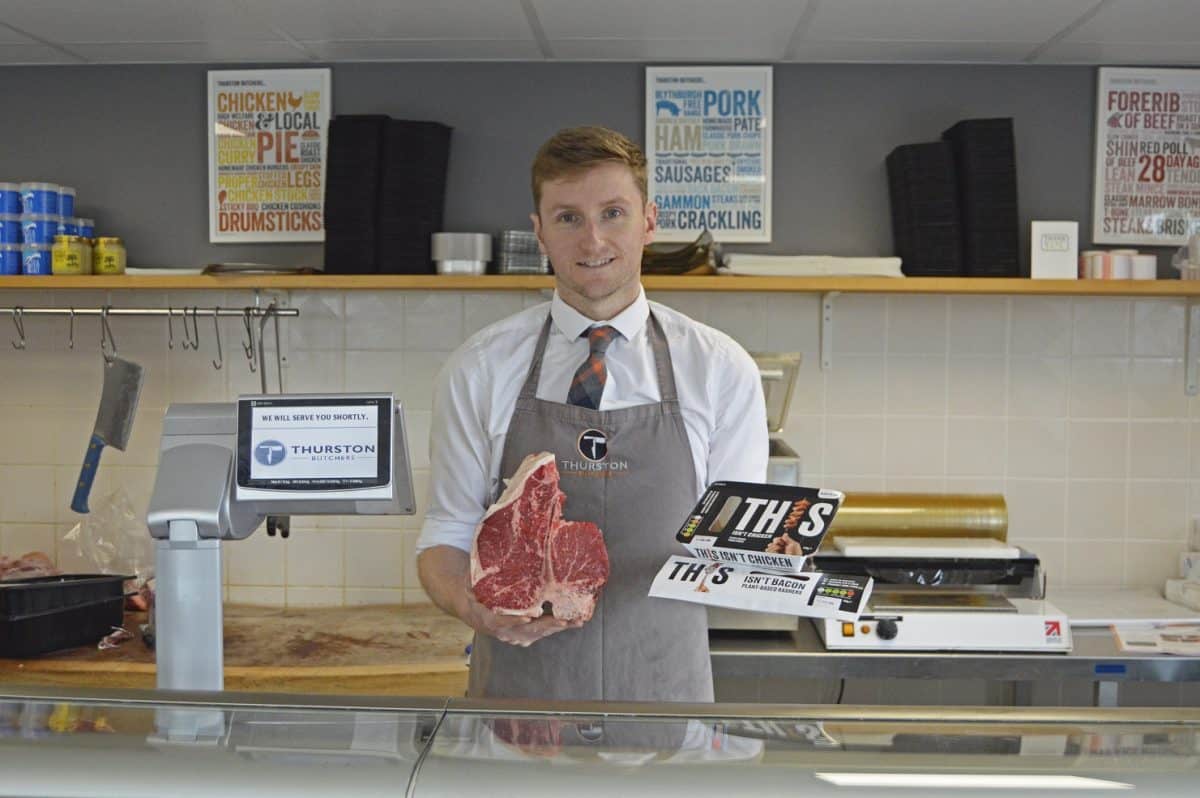 An award-winning traditional butchers in Suffolk has become the first in the UK to sell plant-based meat alternatives.

From next Tuesday Thurston Butchers will begin selling products from THIS, a West London based company producing ‘the world’s most realistic meat alternative’.

The convincing plant-based products taste, look and have the texture of actual meat.

The butchers will be stocking the award-winning THIS Isn’t Bacon (that even sizzles like actual bacon) and THIS Isn’t Chicken in chicken tikka and sea-salt and black pepper varieties.

Alistair Angus who runs Thurston Butchers said: “People are probably thinking it’s absurd for a butcher to sell vegan produce. But I see it as an alternative – we actually get asked a lot by our customers for vegetarian or vegan alternatives so this provides a perfect answer.

“I’m also aware that people are thinking lots about their meat intake – I believe that people should be eating ethically sourced, local meat as often as they can afford.

“If they’re looking in to their meat intake and are looking for something different, then THIS is a great alternative.”

THIS is encouraging people to eat more plant-based foods without having to give up their favourite meaty flavours.

THIS Co-founder Andy Shovel said: “I was frankly astonished when Thurston Butchers reached out. It’s not every day, as a plant-based brand, that you get the endorsement of such hardened meat-lovers.”

“We didn’t even have to think twice about whether or not to supply Alastair and the team – it was a no-brainer. Our mission is to be the plant-based brand for meat-lovers.

“There can’t be many places better suited to realising that ambition, than a butcher’s shop! We hope that Thurston Butcher’s customers love THIS and they see plant-based food in a new light.”

Following two years of research and development, partnering with world-leading texture scientists and flavourists, THIS mimics meat in taste, texture, appearance and smell, but without the ethical or environmental impact, instead using peas and soya beans as the base.

In addition to Thurston Butchers, THIS have also recently launched their products into Holland & Barrett, Ocado, burger fan favourite Patty & Bun and Mexican food chain Chilango, which is all part of their mission to take plant-based eating firmly into the mainstream.