To protect the innocent, the guilty and myself, nothing I tell you will be entirely true.  Here is what I remember about cooking for the Leading Sportsman one New Year’s Eve. One of the nicest people I’ve had the pleasure to cook for, the LS was tall, relaxed, confident, and utterly charming to everyone he […] 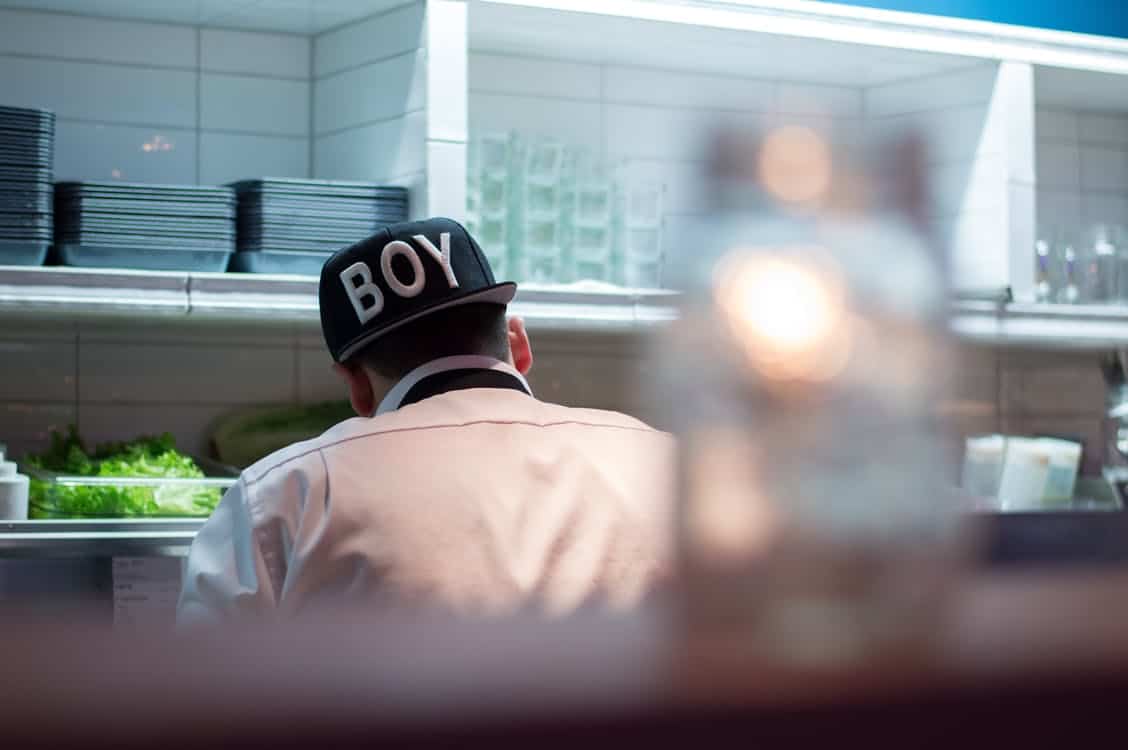 To protect the innocent, the guilty and myself, nothing I tell you will be entirely true.

Here is what I remember about cooking for the Leading Sportsman one New Year’s Eve. One of the nicest people I’ve had the pleasure to cook for, the LS was tall, relaxed, confident, and utterly charming to everyone he met. His French Girlfriend, a former athlete turned model, was quite tall.

This New Year’s Eve the LS had primed me to cook an extra-special early dinner for the two of them. Something in his unusually nervous schoolboy demeanour made me feel that this might be the night he would propose.

In the days beforehand we’d played around with ideas until a suitably classic French menu was finalised. To please the FG there were a good few elements of sweetbreads, so the star elements of the dinner would be ingredients that British butchers make into sausages. I had to get the poultry farmer to have a chicken slaughtered in a particular way so that I would get intact gizzards for a Normandy dish of gésiers avec pommes.

On New Year’s Eve I drove around town picking up each one of the tricky ingredients, but as I was heading back to the LS’s Surrey pad I got a call. Dinner was still on but the menu itself was off. Words had been had, notably “lazy” and “clumsy”, so the menu now needed to be something that the French Girlfriend thought that the LS had cooked himself. It was New Year’s Eve, the shops were closing, and most of the clever ingredients in the boot were now heading directly for the freezer. The FG was due back at Ebbsfleet from a day’s shopping in Paris at 17.15 and from there she would drive back to the house. I looked at my watch, it was 15.47 and the local butcher shut at 16.00.  I told the LS to think about the menu, quickly, then called the local butcher and asked him to please stay open until I arrived. At least I had enough ingredients to make some accompanying dishes.

Arriving at the butchers, I called the LS and put him on speaker phone. His distinctive voice gave him away immediately. Despite this part of Surrey being knee deep in massive houses owned by people who were regularly on the TV, the butcher was hugely star stuck to be talking to one of the UK’s most recognisable sporting stars on the phone. Two minutes later, after the butcher had calmed down, we got on to the topic of meat and ended up by default with Lamb Shank.

The butcher’s face fell. ‘I’ve only got frozen, love’. I asked if he had a microwave but he gave me a withering look. The LS also didn’t have a microwave, at his mother’s insistence, to prevent, as she put it, ‘eating food out of boxes’. I sent a hurried text to the LS telling him to put the oven on 190 and ‘sort out the wines’.

Now the two fist sized bundles of meat needed to be defrosted for two hours and cooked slowly in the oven for two hours until the meat was falling off the bone. Dinner was to be served at 19.00. I was still 15 minutes away from the LS’s house.

I popped the bonnet of my trusty BMW, found a nice hot hollow, snuggled the gigots in there and drove back to the house. I had no idea if this method of defrosting would work, but it was worth a shot. During the drive I had the blowers on to see if there was a smell of melting plastic coming from the engine and one eye glued to the rear view mirror to see if the packages had fallen on to the road. I parked round the back, hidden by the gardeners shed so I could make a quick getaway if we heard the French Girlfriend arrive and the gates opening. I opened the bonnet to check the state of the lamb shanks. On one side of the package the gigots were slightly white where the meat had started to cook, but otherwise much warmer and less frozen than 15 minutes earlier.

The LS was unusually jittery but calmed down a bit as we started to cook together. I dunked the lamb shanks still in their plastic wrapping in a pan of boiling water to finish off the defrosting process. Then I opened up the packaging and slapped them straight into a casserole of hot red wine with stock and put the covered casserole directly into the oven on full blast.

Aside from racing against the clock we had to prepare a dinner that could plausibly have been cooked by him so I defrosted some prawns from the freezer and showed him how to cook a few of them in garlic butter. He could later do that with the rest of the prawns in front of her, making a nice starter. The LS made mashed potato which I showed him how to pipe into duchess potatoes. Under my instruction he made the side salads, dressings and garnishes. This way they would all have a non-cheffy feel to them. After the lamb there would be cheese followed by pears poached in red wine and cinnamon. All the sort of super simple dishes I’d first learned as dinner party staples twenty years before when I was just starting out as a private chef. An hour and a half later I left the kitchen and dictated a list for the LS (so it would be in his hand writing) of the things to be done nearer the time. I’d put all the glasses, napkins, cutlery and crockery on the table so the LS could lay the table in his own style. I wanted it to look a bit ‘off’ so the French Girlfriend could detect it had not been done by me.

The rest of my own New Year’s Eve was spent with friends but all the time I was anxious, wondering how the meal had turned out.

The following afternoon I arrived to find the kitchen in a state of complete chaos but more importantly the FG had a huge ring on her finger and what passed for a smile on her face.

The LS slipped me a sneaky High Five when she had her back turned. She was now the French Fiancée .