We’ve recently reported on the monumental increase in popularity of gin within recent years, yet this modern-day gin renaissance is showing absolutely no sign of impeding. London dry is, undeniably, at the forefront of gin’s current popularity, though a number of different styles have received attention – including sweeter Plymouth gin, plus the revival of […]

We’ve recently reported on the monumental increase in popularity of gin within recent years, yet this modern-day gin renaissance is showing absolutely no sign of impeding.

London dry is, undeniably, at the forefront of gin’s current popularity, though a number of different styles have received attention – including sweeter Plymouth gin, plus the revival of Old Tom. Pink gin is another trendy tipple, originally created by members of the Royal Navy in the mid-19th century to cure sea sickness, combining Plymouth gin with Angostura bitters.

Created by Martin Edgerton Gill, former owner of the London Gin Company, Edgerton Original Pink gin is heavily inspired by classic pink gin, but does not rely on Angostura bitters for its colouring (the pink complexion here comes from the addition of pomegranate seeds, post-distillation). In fact, this is not the company’s first take on coloured gin. At the turn of the decade, Martin Edgerton Gill created the world’s first blue gin – ‘London No 1 Blue’ – which was sold to Gonzalez Bypass of Spain in 2010. While the blue gin has enjoyed much success, it’s difficult to overlook the fact that it looks as though it should be used to clean car windscreens. Electric blue is not an appetising colour, and that is the reason why no blue foods spring to mind as being particularly desirable.

Distilled at the Thames Distillers in London (which also produces Gin Lane 1751, Portobello Road No.171 London Dry Gin and Kamm & Sons), Edgerton Original Pink gin is blended with fifteen different botanicals. These include the likes of juniper, cassia bark, nutmeg, Angelica root and ‘grains of paradise’. When poured, the gin’s bubble gum pink appearance is joined by initial sweet fruit notes on the nose – largely pomegranate. Furthermore, herbal aromas of savory and Mexican damiana are present, followed by dry spice of cinnamon and coriander seeds, which continue on to the palate. Neat, Edgerton Original Pink has prominent flavours of juniper and an initial tart sweetness that’s backed by some, lemon peel and orris root.

As well as the pleasant texture, what’s most apparent, however, is the alcohol potency – which is particularly strong at 47 per-cent. After this calms down, a lingering finish is sweet with liquorice, almond and sweet orange peel. This is a strong gin, which although many may find too overwhelming when neat, it’s best paired with traditional tonic water. This way, the sourness on the tongue is balanced by the tonic’s natural quinine and sweetness, counteracting some of the bold alcohol potency.

Unlike the blue gin, Edgerton pink is not merely a novel approach. Be sure to test the spring-appropriate simple gin and tonic recipe below. 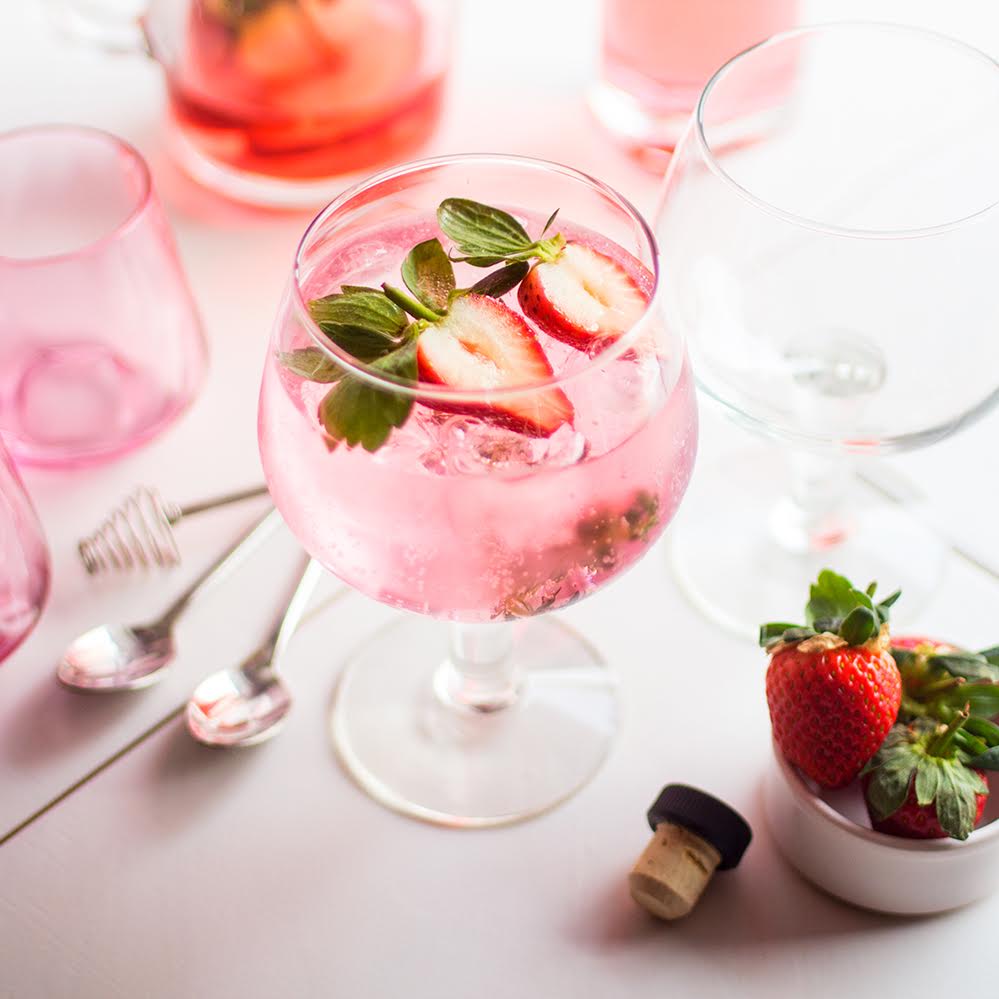 Strawberry, sliced in half

Simply add the gin and tonic to a glass with ice and the sliced strawberries.

Add a twist of black pepper and garnish with one strawberry sliced in half.

Edgerton Pink Gin is available from all major UK department stores and online at 31dover.com, RRP £24.95. Further information can be found at edgertonpinkgin.co.uk.