Like many of the glitzy restaurants that line Berkeley Street and the surrounding areas, it should go without saying that the food at Novikov is generally outlandishly expensive. Split into two main restaurant areas, an upstairs Pan-Asian space and a downstairs kitchen that focuses on mainly Italian food, it would be fair to state that […] 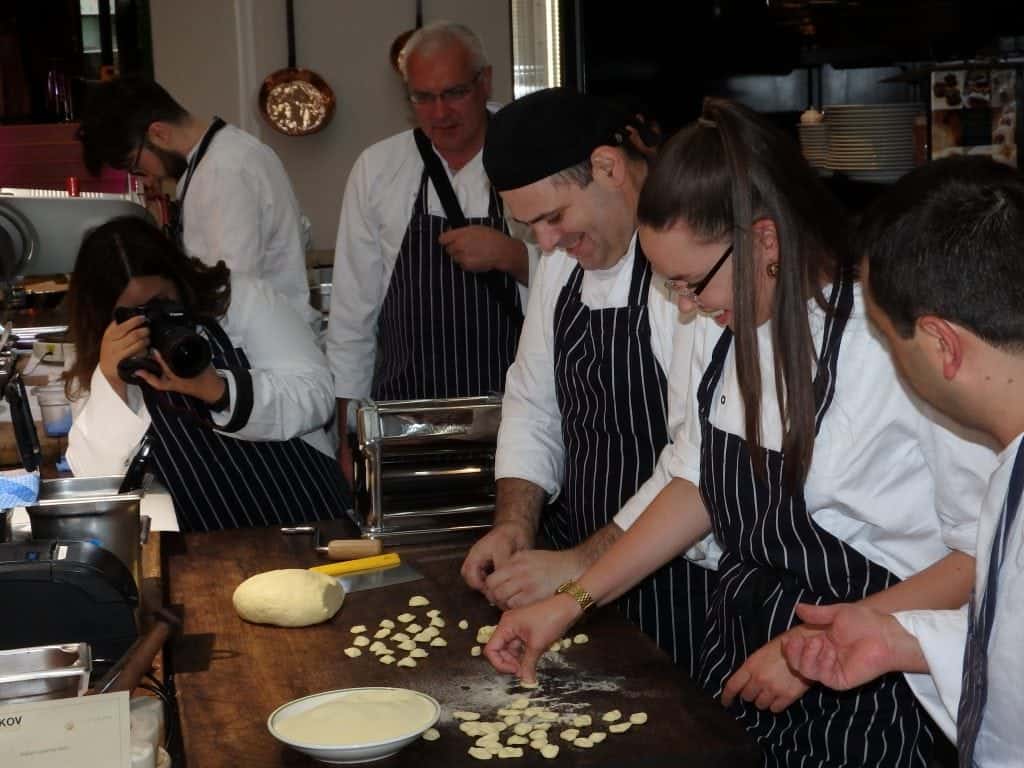 Like many of the glitzy restaurants that line Berkeley Street and the surrounding areas, it should go without saying that the food at Novikov is generally outlandishly expensive. Split into two main restaurant areas, an upstairs Pan-Asian space and a downstairs kitchen that focuses on mainly Italian food, it would be fair to state that Novikov, like nearby Nobu, Scott’s, and more recently Sexy Fish, is also very much a place to be seen.

However, if your sole intention is to sample the food on offer, instead of celebrity-spotting or trying to fit in with the mainly oligarch crowd of the evening service, the Italian masterclass may be for you. Taking place on a monthly basis, each masterclass has a different theme. For instance, when I attended recently alongside four other journalists the pizza was the main event, while this month’s (taking place on Saturday 24th September) will have a strong focus on fish. Priced at £75 per person, the event includes a three-hour course held by Novikov’s chefs, giving participants a chance to cook within the open kitchen as well as the chance to sample the dishes cooked, joined by wine pairings from the restaurant’s Sommelier.

Falling on one of the hottest days of the summer, the pizza-focussed class highlighted five dishes in total, all of which were demonstrated before giving us the chance to prepare them ourselves. Tortelloni with aubergines and scamorza (a type of Italian cheese) was prepared simply, heavily showcasing the incredible ingredients available and decorating the market kitchen. Meanwhile, another pasta dish of homemade orecchiette with broccoli and anchovies required the laborious task of rolling fresh pasta dough into navel-shaped orecchiette.

What was described by the menu as ‘baby lamb shoulder cooked in clay’ was undoubtedly a joint of far cheaper goat. The goat was seasoned, smattered with garlic cloves and veal stock before being wrapped in a sheet of clay and cooked in a pizza oven at scorching temperatures for around three-hours. Although the oven heat was exceptionally high, the clay had managed to prevent every trace of moisture from escaping, resulting in a dish that was quite delectable, served straight from the oven and relinquished from its mud-hut at the table. A dish of sea bass encased within a tomb of rock salt was also enjoyable cleaned, gutted and prepared by myself, unafraid of a little macabre kitchen action, following an initial demonstration.

Unsurprisingly, the pizza Margherita was the feast’s highlight, prepared by the kitchen’s Neapolitan Head Chef. Allegedly first invented in 1889, affectionately named in honour of the Italian Queen Margherita upon visiting Naples, the pizza was pleasingly simple. The dough was pulled without any unnecessary theatre, a sauce base used only the ripest, sweetest tomatoes (from Italy, of course) and the whole thing was cooked in less than two minutes. This is exactly how a pizza should be and was, as a result, infinitely superior to the truffle-laden pizza that I sampled in this very room last year.

While the Italian masterclass at Novikov’s European counterpart foregoes the glamour of dining here of an evening, the hands-on experience is educational, fun, and poses a relatively reasonably priced opportunity to sample the food on offer at one of London’s most consistently popular restaurants.

Further information on the Italian Masterclasses can be found at novikovrestaurant.co.uk.