There’s range and scope at JOAN; it suits many purposes but also has a clear idea of itself. 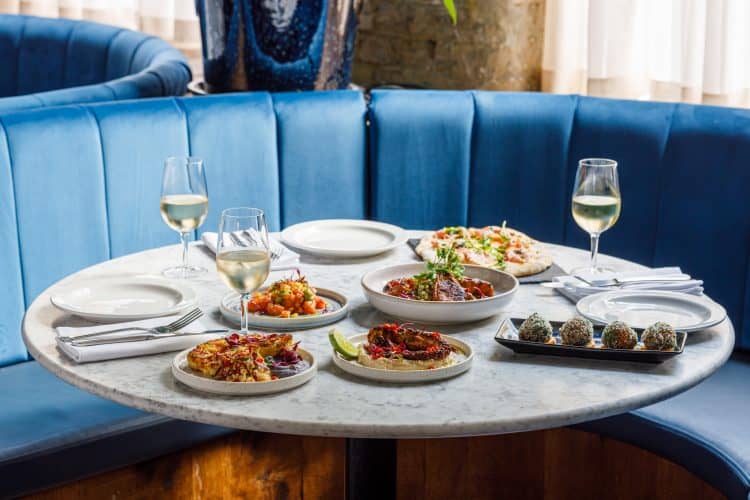 There’s something strange about reviewing new restaurants, necessary as it seems to be. Hitting our stride takes time and the inevitability of a recently opened venture changing and growing over the course of its inaugural year is a prospect for all but the most brilliant. And JOAN, an all-day bar and bistro in Shoreditch, has had a more truncated first year than most. So its slickness spells good news for the restaurant’s future.

The hospitality industry isn’t known for its patience and this has only been exasperated by the Covid-19 pandemic. JOAN launched during the difficulty of late 2020 and reopened this summer following the lifting of lockdown restrictions.

It helps that the restaurant has an experienced chef at the helm in Niko Kontogiannatos, previously Head Chef at Caravan Fitzrovia which churns out food to not a particularly forgiving section of London society. At JOAN, the menu draws inspiration from the chef’s Greek background while incorporating the kind of eclectic style that typifies somewhere like Caravan.

Crucially, there’s an emphasis on the ingredients and everything is made in house from the bread that sounds the opening gong of many meals to that closing scoop of sorbet. This is impressive given the scope of a menu which includes cauliflower ceviche tostadas with avocado mousse, slow-cooked lamb shoulder with labneh and harissa, grilled chicken breast with bacon jam as well as a braised short rib tortillas with onion and mint salad. There are nibbles, small plates and large plates – as is on trend at the moment – although sharing the former rather than the latter would be my recommendation. There are also pizzettas (think prosciutto, stracciatella and rocket), plenty of desserts and a cocktail menu featuring classics and originals.

On the weekends there’s brunch: £25 for two hours of flowing prosecco or mimosas alongside dishes including brioche buns, loaded sourdough, poached eggs and mango smoothie bowls. Over the weekend JOAN is also open until the early hours serving cocktails, local beers and European wines. Due to its Shoreditch High Street location it does makes sense as a late night spot.

All of this, excuse the pun, is a fair mouthful. But it stands to reason that restaurants need to cover bases at the moment and be enterprising. This is a large space, with well-spaced tables blue velvet seats, dark oak furnishings and a smattering of large green potted plants to break things up, so its size means being almost multi-functional makes sense.

“I don’t know why someone would come here and have a burger. You can have that anywhere,” said our waitress on a recent visit. It’s the kind of honesty that is refreshing and the sensitively inclined should note that few single opinions have sunk restaurants. She then recommended the chicken and the cod as her favourite dishes. Clearly it pays to listen as both were excellent, the bacon jam with the chicken making for a balanced but punchy dish. While the cod was served with the kind of savoury, salty chicken-based sauce which works so well with meaty white fish.

Everything seems to happen quite quickly at JOAN. At the beginning of the meal, two Negronis arrived promptly and the small plates were not far behind. And these were the star of the show – spiced tuna tartare on wonton crisps was light and refreshing but also crunchy and savoury.

There’s something alluring about anything beefy, sweet, spicy and braised served on a tortilla or tostada with a healthy dash of something fresh, fragrant and acidic. In this respect braised beef rib tortillas did not disappoint just flirting with the edge of being too sweet; rescued by the smoky sauce.

Gochujang seems to be the latest imported ingredient popping up in every direction following in the footsteps of first hummus, then things like teriyaki, labneh, kimchi, chimichurri, XO, mutabal and beyond. Certainly, there is a uniquely sweet, savoury, spicy quality to the Korean red pepper paste which is so close to being overpowering (but ultimately isn’t) that it’s addictive. Its appearance in an aioli alongside braised short rib arancini is surprising but welcome. There’s almost a ragù quality to the arancini with a sharp crunch and cut from being deep fried and served atop the aioli.

As is often the way, we skipped desserts – all of which are playful takes with classic themes – and ordered another cocktail. A smoky clementine was certainly the former, sitting heavily on its mescal base and a bright green Shoreditch spritz a fun note to end the meal.

There’s plenty on offer at JOAN, a slight order alteration here, a pizzetta or a fuller consideration of the menu there, and our meal could have been a radically different affair. There’s range and scope at this restaurant; it suits many purposes but also has a clear idea of itself. And that’s no bad thing.