28°-50°, a wine workshop and kitchen, has opened a new venue on Draycott Avenue in South Kensington. 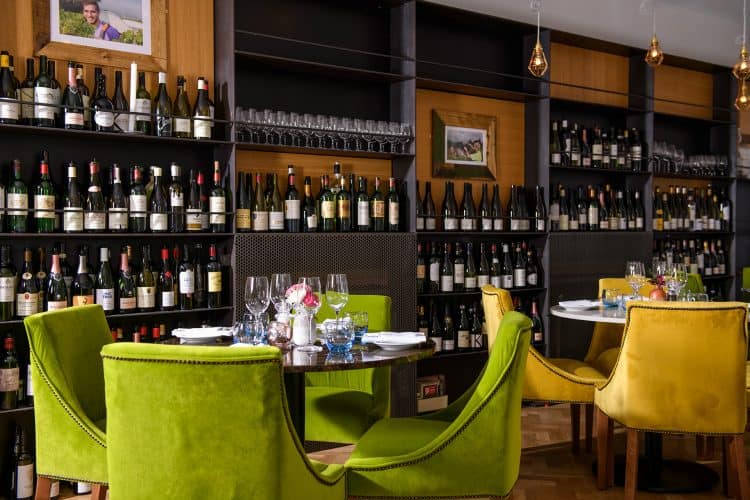 There’s still something reassuring about new ventures in the hospitality industry. While we’re not quite in the doldrums of this time last year, when undertaking an opening really did seem like madness, some uncertainty continues to linger and the driving, almost tropical, rain that has graced London in recent weeks serves as a reminder that it won’t be summer forever. So it’s encouraging, perhaps even inspiring, to see independent wine specialists 28°-50° has opened a new venue with a late licence on Draycott Avenue in South Kensington. The latter announcement is particularly exciting given the recent climate of closures, curfews and bookings. Indeed, the option to have a spontaneous bite well into the evening is a welcome change of pace. Excitement has become so simple.

There’s a dedicated late menu at this wine bar which features small plates, charcuterie boards and puddings and is served from 10pm on Sunday-to-Wednesday, and 10.30pm from Thursday-to-Saturday, while the restaurant closes at midnight. Officially called the ‘Night cap menu’, with a roaring ‘20s theme, classic cocktails such as the Manhattan and Old Fashioned sit alongside rich red wines, Cognacs and whisky. The highlight is a champagne trolley dispensing Kir Royales and Bellinis.

Exclusive to South Kensington is also a five wine and platter pairing menu for groups of up to four. Head Sommelier Xsenia Karpenko is also on hand to take diners through each selection with some transportive descriptions. On a recent visit, along with a glass of Albarino, we were asked to imagine ourselves looking over the Atlantic coast with salt in the air and a cool breeze in our hair. It’s evocative stuff, especially as travel remains so complicated at the moment. And the location helps with this too. There’s a distinctly European feel to the restaurant, as there is to South Kensington in general.

As28°-50°founder Richard Green says: “We are delighted to have opened our fourth central London wine workshop & restaurant.  The mixture of international and local residents fits our relaxed – but serious -take on food, wine and service. We are really pleased to now be open on Draycott Avenue in South Kensington.”

Inside is what’s describe as 28°-50°’s signature style. Think oak and marble tables, rich velvets, tiled bars and wine crate displays. The airy space has large windows and suits an early evening drink or meal and is also equally atmospheric in the dark. The menu is well-curated and with enough variety to give Xsenia room to show the full breadth of her knowledge. People like the idea of indulging in a bottle but having a glass tailored to each course is novel and good fun.

This feels primarily like a wine bar first, as it should, but the food is no afterthought. The cuisine at28°-50°is described as French or Modern European with small plates, sharing platters and starters paving the way for classics such as poussin, steak and chips, lamb shoulder, and seared tuna. The presence of a cheeseburger (even if it is described as the restaurant’s signature) always jars on this kind of menu. But its presence is easy to understand.

To start, we ordered crisp chorizo, smooth truffle arancini and hummus with pitta bread. All of which makes the perfect companion to the Albarino. The main course of seared tuna with romesco sauce was unfussy and everything worked well together: the sauce was sharp and undercut by the salty artichokes both of which brought life to round savouriness of elegantly seared tuna. A salad of thin courgette and chervil was a nice touch too. And the glass of Burgundy Chardonnay certainly didn’t hurt. A side order of new potatoes persillade was just roasted new potatoes. It’s always disappointing to see a word attached to a dish without reason but that’s not to say these potatoes failed in their task.

Having an almost personal sommelier makes a difference. It gives the diner belief in what is often dismissed, by punters, as the hocus pocus around wine. Things start to make sense; food supports drink and vice versa. It’s harmonious and, after all, dining is about balance. No more evenings of palate erasing heavy reds and overblown whites rendering dishes indecipherable.

The wine here comes first and makes the food shine – there’s no problem with that and nor is there with the attentive, charming staff ushering along the proceedings.28°-50° is a great place to while away a sunny evening and beyond.