By Jonathan Hatchman, Food Editor, @TLE_Food Twenty-five years ago, Marco Pierre White began to make a name for himself as one of the UK’s most exciting chefs with the release of his classic White Heat cookbook, and now after reigning as on of Britain’s most celebrated Celebrity Chefs for quarter of a century, the chef has […] 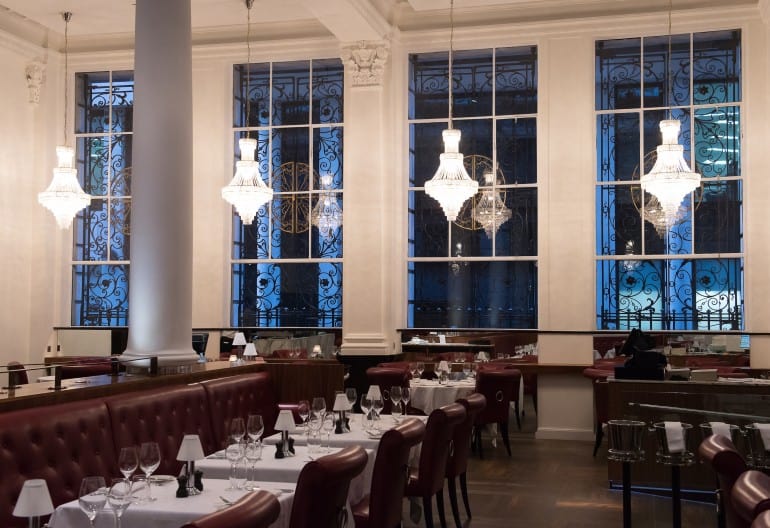 Twenty-five years ago, Marco Pierre White began to make a name for himself as one of the UK’s most exciting chefs with the release of his classic White Heat cookbook, and now after reigning as on of Britain’s most celebrated Celebrity Chefs for quarter of a century, the chef has lent his name to a brand new restaurant. Having sold the original St. James site of Wheeler’s last year, the brand has returned to London with a Wheeler’s Rib Room & Oyster Bar, located within the City’s Threadneedles Hotel.

On the menu, designed by Marco Pierre White himself and head chef Stephen Smith, there’s a selection of mid-priced dishes which make it possible for customers from almost every walk of London life to sample at least one course and a glass of wine at the restaurant. To start, there’s a selection of Meat and Fish dishes (plus two vegetarian options), which comes as a slight surprise being that Wheeler’s has generally been known to associate itself with produce from the sea, juxtaposed to the land.

Alongside classics such as Prawn Cocktail (£11.50), Smoked Salmon with Brown Bread and Butter (£11.50) and Bisque of Crab (£8.50), there’s also a jar of Rillettes of Duck (£9.50): fatty, yet delicious and served with sweet Prunes d’Argen, and a Panache of Foie Gras dish (£14.50). The latter is served atop a fried Duck Egg and disc of toasted Brioche, however the pan-seared thin Liver would’ve, perhaps, been more enjoyable as a terrine or parfait to provide a texture that contrasts the Egg white, and with a richness that compliments the deep orange Yolk.

Following the starters, the main menu is split into two. First there’s the ‘Wheeler’s Classics’, then an assortment of Angus Steaks, served with Chips, grilled Tomato, Watercress and a choice of sauces which include: au Poivre, Bordelaise Butter, sauce Béarnaise, and Garlic Butter. Meanwhile, the Classics menu boasts the likes of Wheeler’s Fish Pie (£15.50), Mr Lamb’s Shepherd’s Pie (£15.50), and even a posh Ham, Egg and Chips dish for £12.50. We opted for the Macaroni of Lobster (£22.50), featuring well cooked pasta, a generous portion of Lobster and a rich Buttery sauce laced with Tarragon to bring the dish together. The Grilled Dover Sole on the other hand, although cooked well, did lack some depth. Served with peeled boiled potatoes and a tasty Tartare Sauce, an element of crunch (perhaps provided by Samphire or Capers) to remedy the general softness of the plate would’ve been more than welcome.

Alongside the restaurant itself, there’s a separate Champagne and Oyster bar, albeit showcasing none of the latter, that we found ourselves loitering within, joined by a couple of pretentious City gents, until realising that the restaurant itself actually lies at the back of the venue. Surprisingly quiet for a Wednesday night 8:30 dinner slot, the former bank is airy, filled with Bob Carlos Clarke’s White Heat photos and considerably less French than we’d expected. In style and service that’s (thankfully) a little more casual.

On to desserts, there’s a Sticky Toffee Pudding that my partner is unable to resist: light and rich but less heavy than would’ve been preferred by Sticky Toffee purists. However, my Eton Mess is absolutely remarkable. Thick cream, fresh berries and little bursts of Meringue which provide a perfect finale, and needless to say my highlight of the evening. The food at Wheeler’s is reasonable and well-priced considering some of the lavish ingredients on offer, just don’t go along expecting to sample Mr. Pierre White’s own three-Michelin star cooking.