One of two restaurants in The Stratford, a new skyscraper comprising a hotel and long-stay loft apartments. 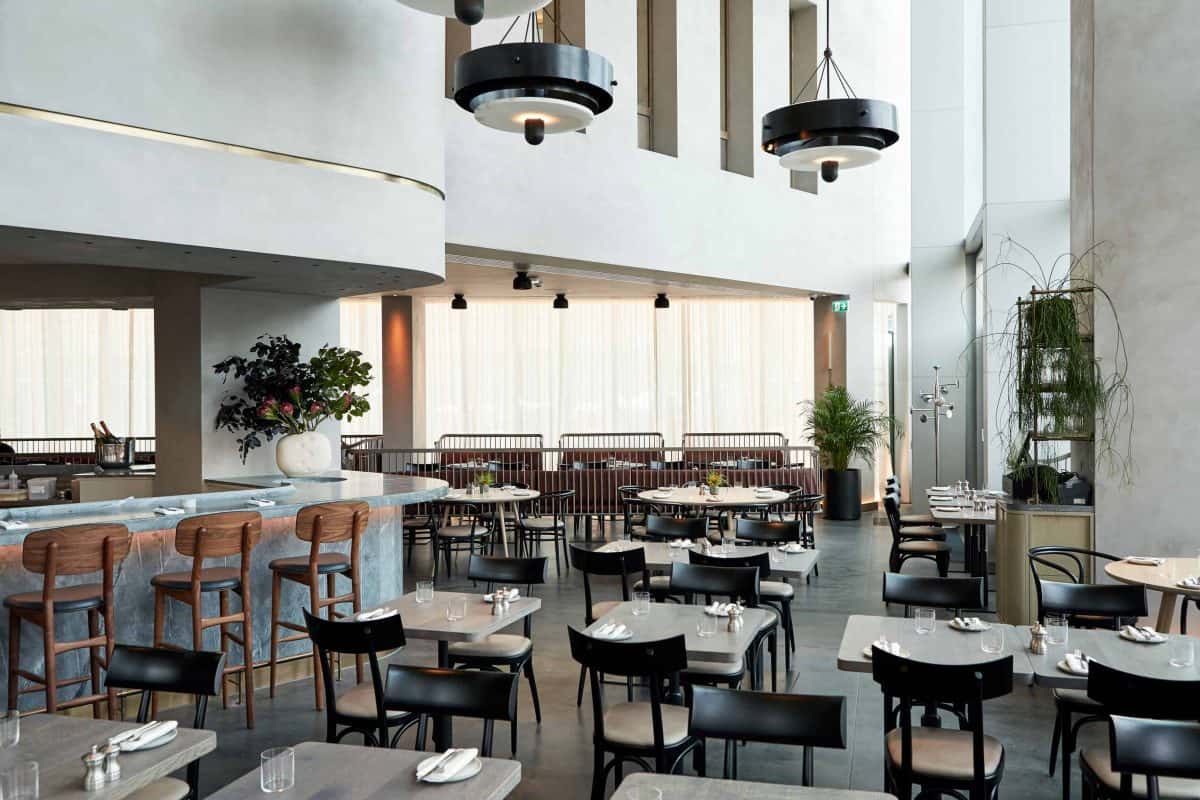 Stratford has never been a dining destination, but with the launch of The Stratford, developer Harry Handelsman is hoping to make a change. A new skyscraper comprising a hotel and loft apartments, the development is also home to two new restaurants – Allegra, a seventh-floor fine dining restaurant and The Stratford Brasserie, an all-day dining establishment.

The first integrated-living building in Europe, The Stratford follows the success of Handelsman’s previous projects, St Pancras Renaissance Hotel and Chiltern Firehouse. Just across the road from Stratford International Station, the 42-storey, double-cantilevered tower was designed by SOM, the architects behind the Burj Khalifa and One World Trade Centre.

On the ground floor, with its triple-height lobby and 10-metre fireplace, The Stratford Brasserie intends to act as a social hub for The Stratford Hotel and Lofts. Inside, the restaurant is designed by Space Copenhagen (the team behind NOMA) and features soft leather seating with statement wooden benches and tables, joined by a long open bar and kitchen. In keeping with the all-day dining blueprint, service is casual yet professional.

As for the food, chef Ben Harrington, formerly of Soho House Group and Gordon Ramsay at Claridge’s, has produced a menu that centres on light sharing dishes while championing seasonal British ingredients. A recent dinner began with a dish of huge cod cheeks (£6), cloaked with batter and lightly fried, served over a bed of warm tartare sauce, making excellent use of an often wasted by-product of the UK’s most popular fish. Elsewhere, grilled Romero peppers were served on a pedestal of toasted sourdough with chopped anchovies and a whisper of salsa verde to complement the sweet peppers (£5). Simple, yet effective.

Thick chickpea panisses (£4), on the other hand, were an interesting vegetarian dish yet somewhat dry and stodgy, only slightly aided by the accompanying almond and sherry vinegar dressing. Better was the burrata (£11) – a typically failsafe dish, here accompanied by ribbons of Crown Prince squash and a blizzard of candied walnuts. A must-try; as was the steak tartare (£12) with its sunset egg yolk and a peppering of more-ish “beer crisps”.

With the mains section of the menu, a large number of hotel brasserie classics are available, including various burgers, salads and steaks. Otherwise, some far more interesting alternatives are also served. A tranche of sea bass, for instance, was well-cooked and capped with a shard of crispy skin, simply joined by a rocher of red pepper puree and a courgette flower generously stuffed with an exemplary, Thai-inspired crab mousse (£26). Elsewhere, thin tortellini were filled with sweet butternut squash and lavished with a sauce of butter and sage: simple comfort food at its most endearing (£11). To finish, a sharing portion of Baked Alaska (£14) featured a tube of vanilla parfait ensnared by a layer of charred Italian meringue, joined by a handful of raspberries and hunks of spiced apple. A refined, well-executed take on a classic.

If anything, Allegra is perhaps more likely to put Stratford on the map as a bona fide dining destination, but The Stratford Brasserie’s food is considerably more impressive than its run of the mill all-day dining hotel restaurant contemporaries.