On the ground floor of the Marriott Hotel, just off Edgware Road, The Pickled Hen promises a ‘selection of authentic British food and drink, with a pickled twist’. I enjoy good pub food and pickles as much as the next person, but the signature Pickleback (Jameson with a chaser of hen pickle juice) fills me […] 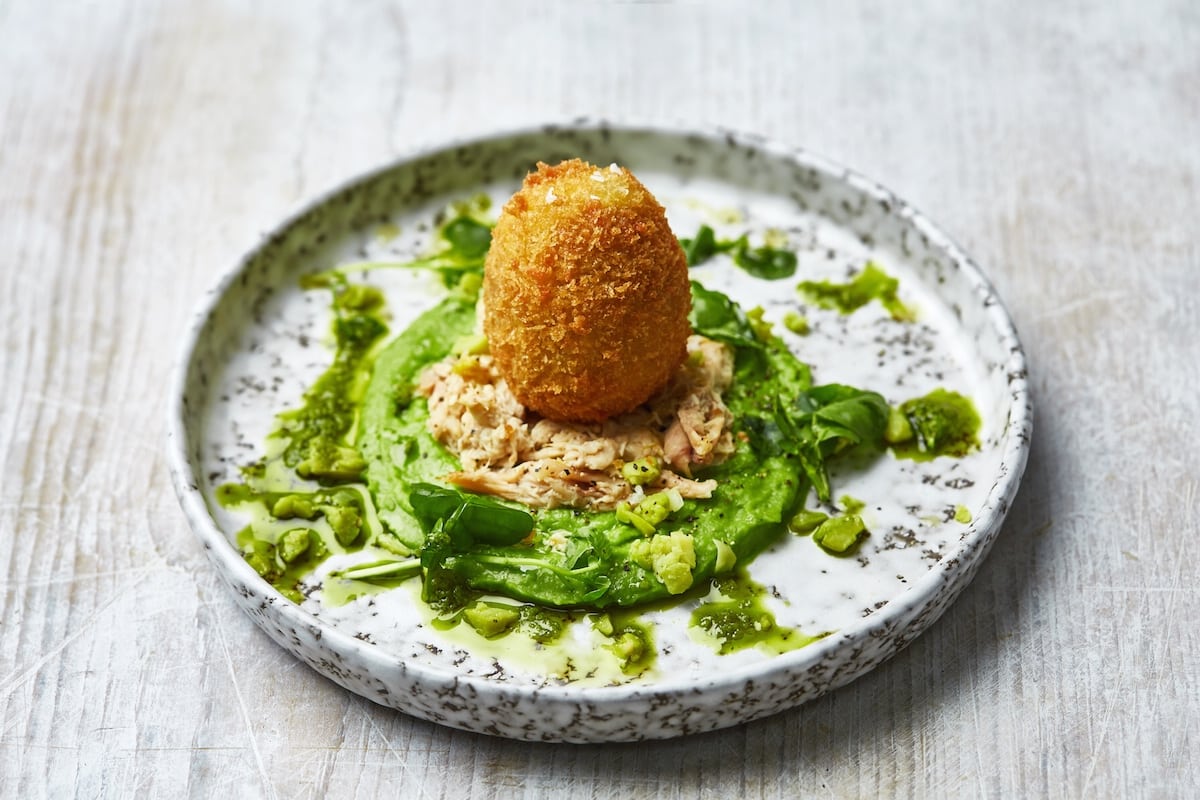 The Pickled Hen's 'The Chicken and The Egg'

On the ground floor of the Marriott Hotel, just off Edgware Road, The Pickled Hen promises a ‘selection of authentic British food and drink, with a pickled twist’. I enjoy good pub food and pickles as much as the next person, but the signature Pickleback (Jameson with a chaser of hen pickle juice) fills me with concern.

Opened at the end of the summer, this new ‘gastro-pub’ is not this year’s first new opening with a name suggesting a heavy poultry theme (Red Rooster, Duck & Waffle Local, CHICK’N, etc). Inside, the 150-seat restaurant is mostly empty when we arrive, except for a large private party to one side, giving us a choice of tables. Here, the space (designed by B3 Interiors) is dominated by a large well-lit bar, which reminds me of a speakeasy I once visited in Chinatown, and white wall tiles – the type you’d expect to find in the bathroom rather than the main dining area. All the signage follows the hen theme, with bathrooms marked as ‘Chicks’ and ‘Roosters’, which some will find tedious, though I find them rather endearing.

Even the menus follow the same theme, which ties everything together nicely and pays homage to chicken as an ingredient (with much more imagination than just a selection of chicken wings, as is the case in so many London restaurants) without limiting itself to just this one component. There is seafood, lamb, beef and more. To start, although  tempted by the baked camembert and crispy halloumi, we choose ‘The Chicken & The Egg’ (£8) and a fig and caramelised red onion tart (£7.50). The tart is served with feta cheese and a salted honey vinaigrette which lends a particularly pleasant saltiness not only to the dish but to my tequila and lime cocktail, too. Mary Berry would, perhaps,  be proud of the tart’s pastry – without a soggy bottom in sight. The sweetness of the red onion and the fig along with the flaky, buttery pastry and the salty feta though, is remarkable. 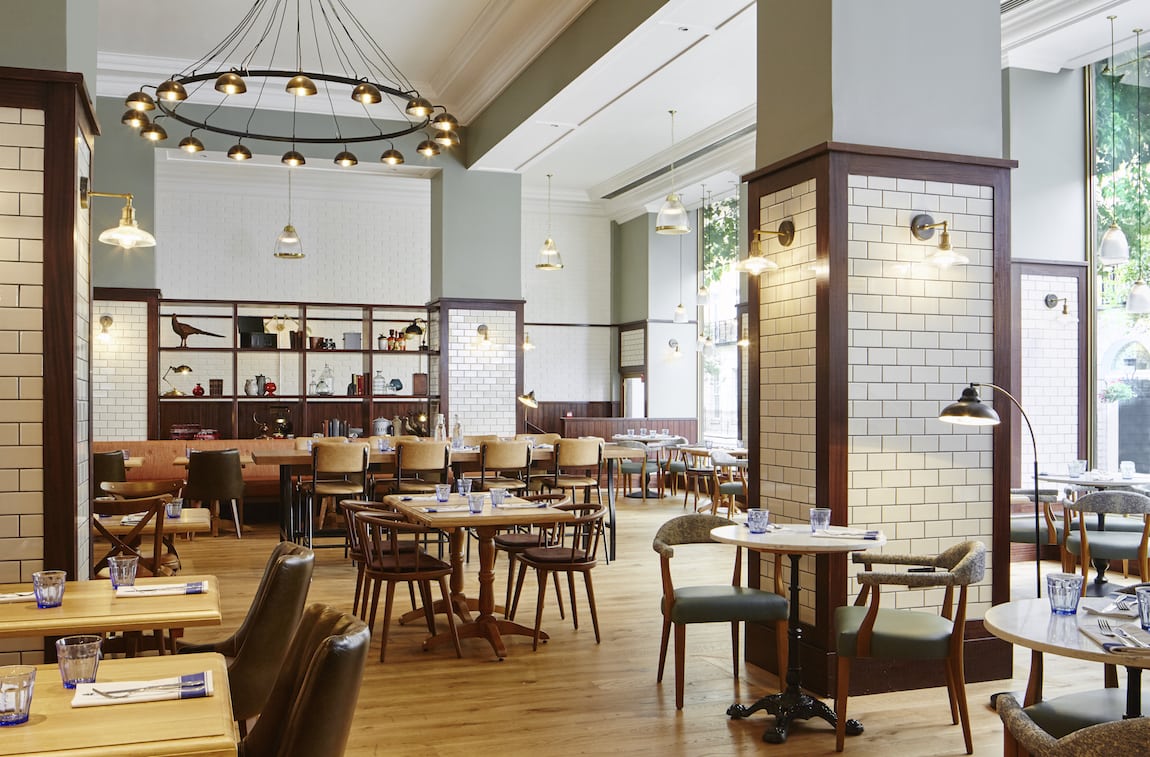 The Chicken and The Egg is described simply as ‘chicken terrine, crispy free-range egg, smashed peas’ but is much more than that. The chicken is juicy, the smashed peas a little minty and the ‘crispy egg’ is actually a Scotch Egg with a perfectly runny yolk. The breadcrumbs covering the egg and the smashed peas give a distinct Fish and Chips feel to the dish and with properly cooked, still juicy, chicken terrine – this is one to remember. For mains, The Pickled Hen burger (£12.50)  is served on a paper-covered tray in the manner of many a London burger joint. The burger is also accompanied by chips,  beef brisket, caramelised onion and a Lancashire Bomb. The rich sweetness of caramelised onion which works so well in the tart starter, however, overpowers any other flavours aside from the beef patty. As a result, I am told the other elements are there, otherwise I wouldn’t be able to guess.

The roast butternut squash (£11), along with walnut, roast parsnip, parsley, honey and thyme is served in the biggest Yorkshire pudding I’ve ever seen and a side of tomato sauce (think marinara rather than ketchup). The vegetables are sweet, soft in the middle, but firm on the outside and the walnuts add a lovely crunch. At this size, the Yorkshire pudding starts to taste like the pancake batter it is, so a sauce is certainly needed. Alas, I’m not convinced that tomato sauce is the right choice. Despite the sauce choice, the dish does make for an enjoyable light mid-week dinner.

To end, I’d like to try ‘Egg & Soldiers’ (white and dark chocolate mousse, brioche toasts) but unfortunately it isn’t available, so we share ‘The Pickled Cheesecake’ (£6.50). Instead of a biscuit base, this cheesecake is server in a biscuit cup, which looks interesting, but is onerous to tackle without flinging cheesecake across the table. The biscuit itself is fabulous, rich and buttery just as it should be. The use of sour cream cheese makes the dish sharper than I’m used to, but balanced with sweet raspberries, it works well.

Overall, some dishes are definite hits, particularly two vegetable-based choices, while others are very near misses. Having said that, there were one or two dishes I would return to try and based on the quality of the Yorkshire Pudding, the roasted vegetables and the chicken terrine, I suspect a chicken Sunday Lunch may well be on the cards in the near future.

The Pickled Hen can be found at 134 George Street, London, W1H 5DN.