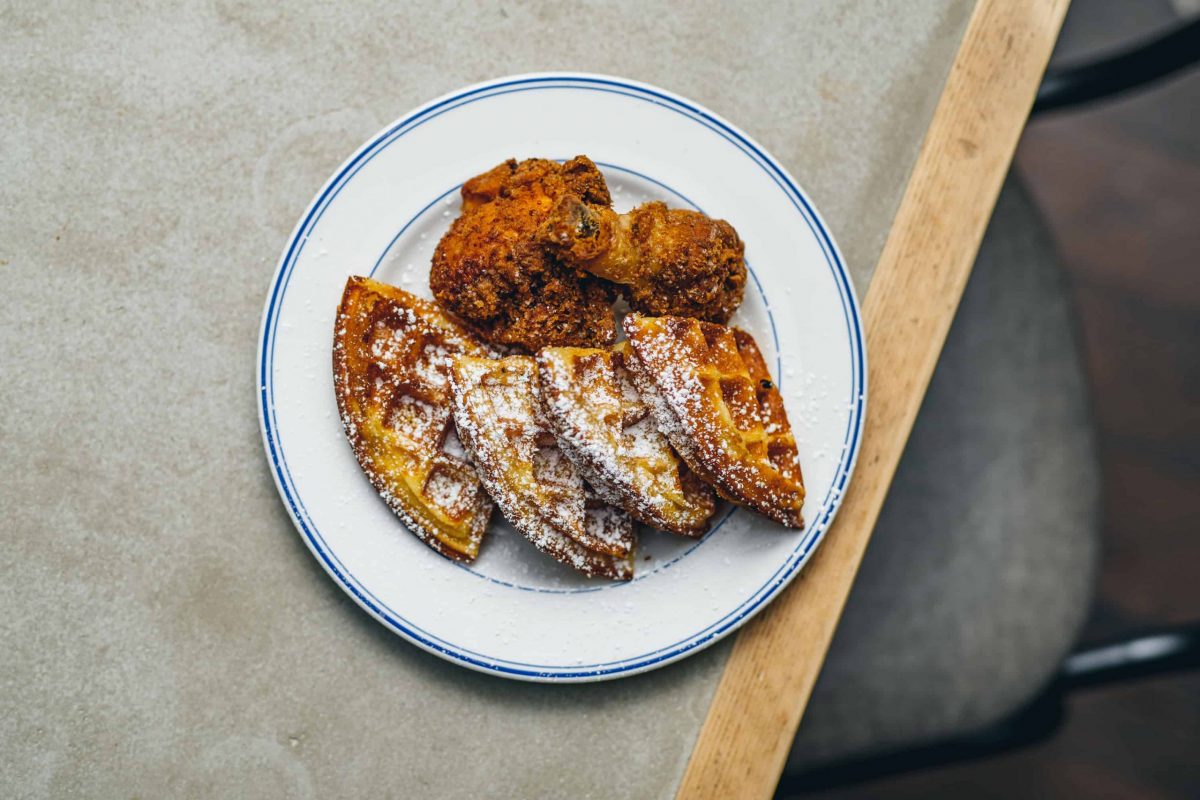 Another celebrity-backed restaurant to open in London this year, joining the likes of Wahlburgers and Neat Burger (Lewis Hamilton’s vegan restaurant), Sweet Chick is a project between New York native John Seymour and Nas.

Inspired by the rich origin story of chicken and waffles, the Sweet Chick brand was launched in 2013 with the opening of a Brooklyn restaurant, soon followed by further sites in New York and Los Angeles. The exact origins of pairing fried chicken with waffles has been long contested. While an early version of the dish was popular among the Pennsylvania Dutch during the mid 1800s, the pairing is most commonly attributed to the country’s south. As it’s known today, however, the dish is perhaps best attributed to Harlem’s African-American community. During the 1920s and ‘30s, Harlem’s jazz club patrons would leave in the early hours of the morning, craving fried chicken. Establishments such as Wells Chicken and Waffles thus merged the two to, ultimately, create a meal incorporating elements synonymous with both breakfast and dinner.

Chicken and waffles is touted as the specialty of Sweet Chick’s five US restaurants, as well as the first international venture, recently opened near Oxford Circus, taking over the former Carluccio’s site on Market Place. Inside, the restaurant is low-lit and features a long bar while the space opens up towards the back of the room to accommodate more seating. Classic hip-hop plays throughout and various nods to rappers such as the Notorious B.I.G. are omnipresent, from neon lights displaying iconic lyrics through to cocktails like the ‘Christopher Wallace’ – Sweet Chick’s take on an a classic Old Fashioned. Staff members are hospitable, eager to please and enthusiastic in that endearing American way, well-suited to the casualness of the restaurant and the general ambience.

On the menu, Sweet Chick champions southern-inspired comfort food dishes served alongside a clutch of signature cocktails and beers from London Fields Brewery. A recent dinner visit began with a bucket of biscuits (the American kind, like savoury scones), each well prepared, served warm and joined by a melange of spreads: slightly salted butter, sweet strawberry jam, salty bacon butter and pimento butter – the best of the four (£7). A fistful of crawfish hushpuppies (£9), on the other hand, were mostly greaseless and rampant with sweetcorn – heavily seasoned as all savoury comfort food should be.

The fried chicken was less remarkable, however. With a selection of waffles available to accompany (Classic, Bacon-Cheddar, Dried Cherry, Rosemary-Mushroom, Apple Cinnamon or Spiced-Pecan), the plain waffle would have been delicious if it was, at least, served warm; yet an accompanying hunk of breast and a large wing were dry and lacked both seasoning and spice (13.50). A shame considering the appeal of the sweet tea brining process. The bucket of chicken (£17) featured two of the same lacklustre breast portions and an additional wing, though the sides were all prepared to a very high standard. Creamy mashed potato was drenched with a rich, salty chicken gravy; cornbread (£5) was sweet and texturally spot-on; while the greens (£6) were an unexpected highlight.

Overall, Sweet Chick occupies a great, fun space with a lively atmosphere aided by the staff. The food has its merits, yet the fried chicken lacks a little depth. A teething problem that can easily be ironed-out, let’s hope.