In this modern-day world of inescapable food fads and single menu demi-chains dominating London’s restaurant scene; the notion of visiting a British institution for dinner is actually somewhat refreshing. First opened in 1828, Simpson’s-in-the-Strand is located within The Savoy hotel and looks as though very little has been changed over the past 188 years. Inside, […] 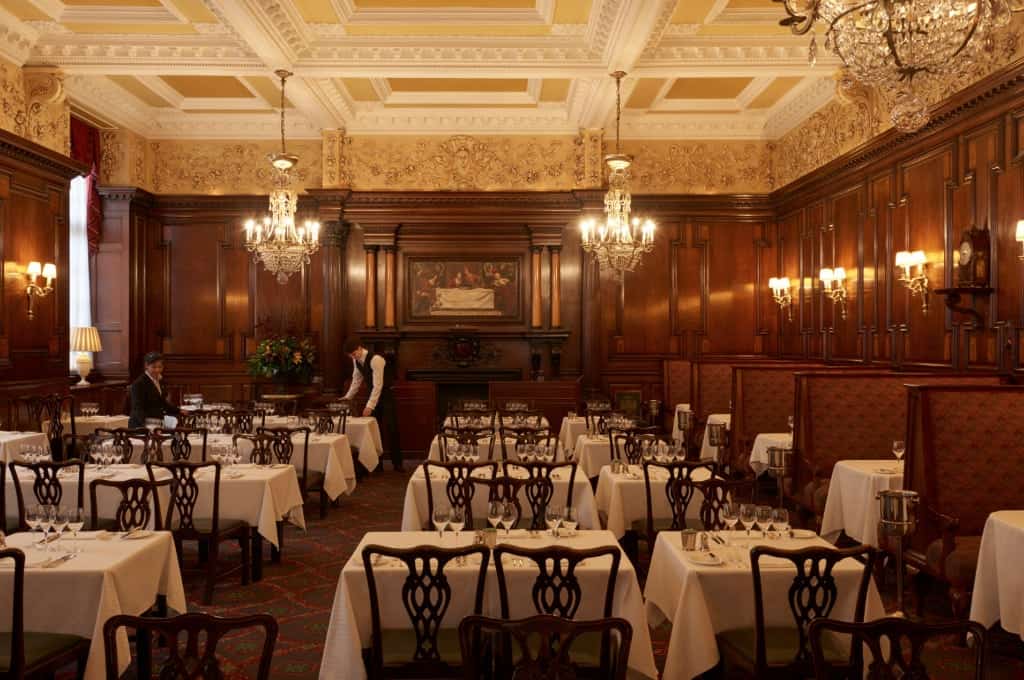 In this modern-day world of inescapable food fads and single menu demi-chains dominating London’s restaurant scene; the notion of visiting a British institution for dinner is actually somewhat refreshing.

First opened in 1828, Simpson’s-in-the-Strand is located within The Savoy hotel and looks as though very little has been changed over the past 188 years. Inside, guests are greeted and whisked through to the vast dining space adorned with dark wood panelled walls, expectedly high ceilings, heavily starched linen and a carpet so jazzy it’s a wonder the local branch of Wetherspoons hasn’t bought it. During our lunch time visit, there were also a number of trolleys wheeled about the dining room with vast silver cloches covering hunks of roasted meat, carved at the table by chefs wearing ridiculous hats.

While roasted meats are amongst the signature dishes on offer here, the menu is thankfully vast, with plenty of options that make the restaurant seem less like a five-star hotel’s built-in Carvery. Elsewhere, a strong focus on British seasonal food is prominent with untrendy classics such as Beef Wellington (more on that later) and steak and kidney pudding that’s rarely seen south of Watford.

“Have you found any lead yet?” Our waiter questioned persistently as I ploughed through a starter of pigeon breast, almost as though a handful of pellets had been intentionally used as seasoning for the chefs to laugh at the toothless restaurant critic. Fortunately, it turned out that the waiter was simply being cautious, being that no ammunition was found on this occasion. The fairly plump breast had also been cooked to a satisfying magenta hue and served with a rich, almost sickly sauce to accompany. Another starter of scallops comprised three molluscs that had been caramelised in the pan and paired with thin slivers of salty black forest ham and a contrasting cream of sweetcorn, working in harmony with the subtlety of the seafood.

With the mains, my companion opted for a dish of lamb rump – an under-loved cut that was served medium-rare, with our waiter presenting a choice. Being given the choice of cooking preference is overlooked so often nowadays, yet something so simple can have drastic impact on differentiating between a good or bad meal. The lamb was fantastic, well coloured on the outside yet pink on the inner, with the blushing flesh emphasised by being served cut into thick slices. The accompanying faggot with a faint hum of spice, nonetheless, was king of the plate, forlornly seldom seen on this side of the millennium.

The same can be said for luxurious Beef Wellington, a time-consuming dish to prepare and difficult to execute to perfection, it is the one dish I’m unable to avoid ordering, and as a result I’ve eaten just as many as I’ve discovered on restaurant menus. This particular parcel had been made to an individual size, with perfectly golden pastry, a layer of both earthy mushroom duxelles and rich chicken liver parfait to encase a delectably rare slab of fillet steak. This was served with a handful of carrots and a predictably decadent sauce to match one of the city’s best variations of this dish. What’s more, the Wellington seemed incredibly reasonable in terms of price (£32.50) considering the high cost price of fillet steak, the labour intensive preparation and generally high mark-up of such a restaurant. To finish, a sharing plate of treacle sponge, another of the restaurant’s signature dishes, was recommended. And what a recommendation it was, slathered with sweet vanilla custard working with the sickly sweet treacle in a way that’s bizarrely reminiscent of the best school dinners.

Serving quintessentially British food that’s delightfully comforting, if not mind-blowing, within one of London’s best regarded hotels, Simpson’s-in-the-Strand takes guests on a welcome nostalgia trip and is, against all odds, warmly reminiscent of a time when Britain was at its greatest – without the need for any hyper-modernity or gimmicks.