Landing a serious job in London is a cause for celebration for most twenty-somethings, but for Pizza Pilgrims founders James Elliot and brother Thom, it was a cause for great concern. In 2011, faced with the prospect of a 9-5 office desk existence and a life working for ‘the man’ with mortgage obligations, 2.5 children […] 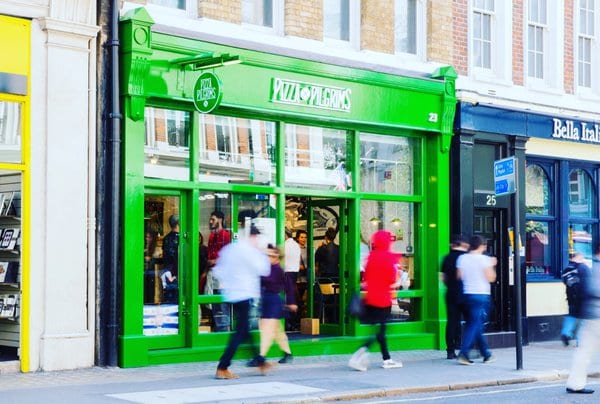 Landing a serious job in London is a cause for celebration for most twenty-somethings, but for Pizza Pilgrims founders James Elliot and brother Thom, it was a cause for great concern.

In 2011, faced with the prospect of a 9-5 office desk existence and a life working for ‘the man’ with mortgage obligations, 2.5 children and the rest the brothers drew up courage of the Dutch variety and embarked on a pilgrimage to Italy to discover the true art of pizza making. Six weeks later they returned to the UK and installed a traditional stone oven in the iconic ‘Pilgrims’ van and set up stall on Berwick Street in Soho, a stone’s throw away from Dean Street where the boys set up their first shop. Today they boast permanent residence in Kingly Street in Carnaby, Exmouth Market, the Swingers crazy golf complex and, most lately, in the heart of theatre land on Garrick Street in Covent Garden.

Amidst a raft of competition from innovative eateries including many that are ruffling feathers in the same space – Homeslice, Franco Manca, Fire & Stone et al – the first question that springs to mind as you step through the bold green shop front and in to the café-style restaurant is, what makes these guys stand out from the crowd?

In a word, it’s their dough. With big bags of flour littering the floor and cases of olive oil in sight it is immediately evident that the pilgrims were exposed to the secret art on their travels. The tearable, spongy dough is a far cry from the rigid bases found in most pizzerias, with wood-burned air pockets spotted around the tanned crust like a jaguar’s skin.

The toppings complement this doughy perfection nicely with a range of white and tomato bases. We tried a mixture of the two opting for Margherita with Neapolitan black pepper salami and White pizza with fresh fennel sausage, chilli, wild broccoli, parmesan, basil and olive oil. We teared and shared and hummed noises of approval as a great range of flavours came to the fore. The salami pizza was the safe option, but given the choice again I think we would have probably ventured more into the murky world of the smoked Napoli or perhaps portobello mushroom and truffle.

But there’s no bad choices on the menu. Indeed, the pizza that really demonstrates the Pilgrim’s USP is the cheese-free Marinara consisting simply of an oregano, garlic and basil-infused tomato sauce smothered across a pizza base. The pizza foundations in all its simplicity, but if you’ve got it, flaunt it!