Have you ever been to a restaurant so frightfully chic that it manages to justify dropping crucial vowels from its name, as well as charging double-figures for bowls of pulverised avocado? Sandwiched between a superfluous designer clothes shop and an Aston Martin “brand experience boutique”, MNKY HSE stands out on Dover Street – resembling a […] 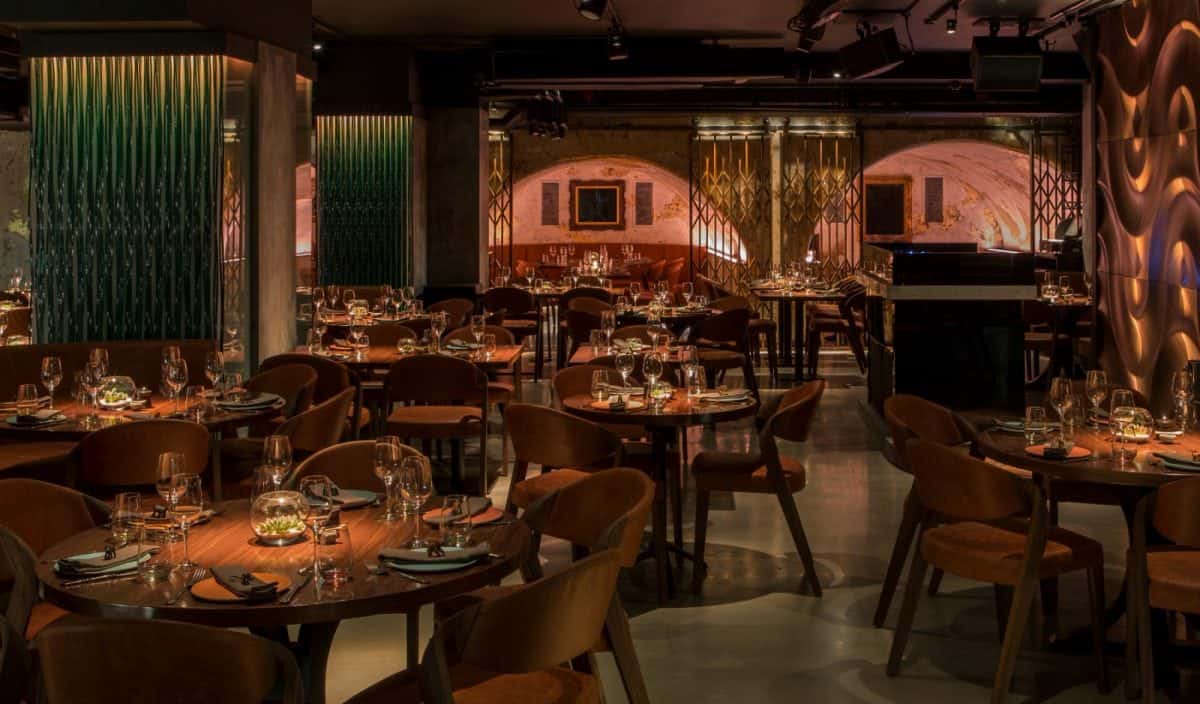 Have you ever been to a restaurant so frightfully chic that it manages to justify dropping crucial vowels from its name, as well as charging double-figures for bowls of pulverised avocado?

Sandwiched between a superfluous designer clothes shop and an Aston Martin “brand experience boutique”, MNKY HSE stands out on Dover Street – resembling a seedy nightclub owned by Peter Stringfellow, from outside. Blacked-out windows are placated with a brass monkey-shaped door knocker, plus a sounder of clip-board wielding security guards blocking the space between the path and front door with a black velvet rope. Down the narrow stair case, the venue is surprisingly cavernous, and less quite surprisingly garish. Each table’s mis en place includes tiny plastic monkeys, possibly sourced from the Early Learning Centre, which send my dining companion into a dizzying state of ecstasy.

“Come two o’clock the place is absolutely heaving,” a sharply dressed restaurant manager insists. “You should see it on a Friday and Saturday night, we move some of the tables to make space for dancing around the DJ booth, people dance on the tables. It gets pretty wild.” On a wet Tuesday evening, at a reasonable dinner hour, MNKY HSE is starkly quiet. The majority of the restaurant’s clientele consists of wealthy families and women dressed as though on their way to Ascot. A live DJ blares funky house music from her MacBook, but everybody seems more interested in lurid green Champagne cocktails and pretty Latin American ‘small plates’ less calorific than a bowl of dust.

From the fairly extensive menu split into headings such as ‘MNKY Bites’, ‘Small Dishes’ and ‘Raw & Cured’, we begin with a bowl of guacamole. The guacamole is silky smooth and topped with finely diced tomato. The mellifluous puree is made perfectly – as it should be at an astronomically inexcusable £12.50. Better are the grilled, sweet Shishito peppers (£6.50) – not too dissimilar from Padron peppers, served with a heavy handed shower of rock salt.

The best thing eaten here, soft tacos filled with chipotle-spiced chicken and crispy skin (£15) are delicious bite-sized morsels, even better when slathered with guacamole. Kingfish ceviche (£16.50) is another delight: simple but bracing, drenched with stagnant ponzu dressing and topped with a crispy ‘nest’ of sweet potato. Glazed baby chicken (£16) is intentionally served pink, as insisted by our waiter. No, it isn’t chicken sashimi as is curiously popular in Japan, but lightly smoked. As a result, the chicken is succulent, but it’s delicate flavour is completely overpowered by largely unpleasant lashings of brackish soy sauce.

Slightly straying from the Latin American theme, braised lamb shank (£24) is cooked properly and falls from the bone, cooked in an undisclosed assortment of ‘aromatic spices’ less present on the palate than on the menu. Elsewhere, the chef’s exact reasoning for including cauliflower gratin (£8) on the menu is one of life’s untold mysteries – up there with the erection of the pyramids, or who shot 2pac. Even in the most high-end of gastro temples, using the most superfluous produce – cauliflower gratin is a dish best reserved for £3.69 Carveries. Here, the dish looks as though projectile vomited from Green Park station, handily caught in the cast iron bucket it’s served in. At least there’s no need to reach for Mr. Creosote’s “better get a bucket…” line.

For dessert, pumpkin brûlée is possibly the most innovatively exciting dish sampled: sweet but with some delicate spicing that brings balance. Dulce de leche mousse, however, is disastrous. The flavour is passable, but the caramel mousse with striking similarity to butterscotch Angel Delight, stale biscuit base, popping candy and a suggestion of banana tastes exactly like the sort of dessert born from ingredients salvaged from the back of the cupboard in the final, impoverished stretch to payday.

Although expensive, sometimes eye-wateringly so, the majority of food served at MNKY HSE seems somewhat detached from the supposed flashy Mayfair target audience. No, the food isn’t always a raging success – but everything else – even the relatively subdued Tuesday atmosphere – is quite fun, confident and considerably less odious than the blueprint set by nearby Novikov, Sexy Fish and surrounding bad taste temples of a similar ilk.