By Michael McNulty There is little doubt that Maysaloun Hamoud’s film, In Between, is an important and ambitious debut feature. A feminist film, centring on a trio of Palestinian-Israeli women as they struggle to find a balance between the liberal lives they aspire to and the traditional culture that surrounds them. Selma (Sana Jammelieh) and […] 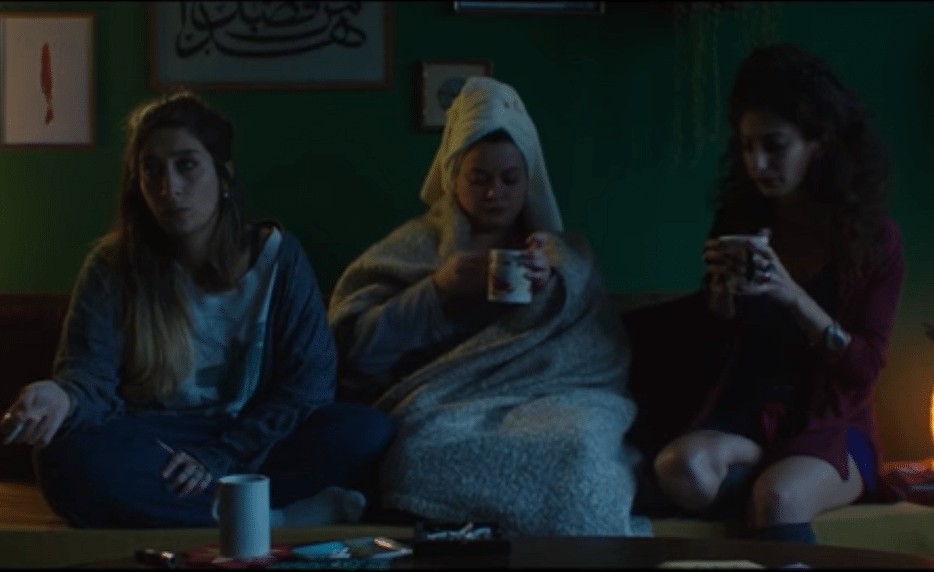 There is little doubt that Maysaloun Hamoud’s film, In Between, is an important and ambitious debut feature. A feminist film, centring on a trio of Palestinian-Israeli women as they struggle to find
a balance between the liberal lives they aspire to and the traditional culture that surrounds them.

Selma (Sana Jammelieh) and Leila (Mouna Hawa) live in an apartment together in the Jaffa district of Tel-Aviv. Selma is an aspiring DJ who works a series of pick up jobs in bars and restaurants and Leila is a successful lawyer. They’re young and attractive; enjoy dancing, beers and the odd joint. Selma’s pious and reserved cousin, Nour (Shaden Kanboura), moves into the flat while her fiancé, Wissam (Henry Andrawes), tries to find her a place of her own. Nour too, without compromising her faith, finds herself enjoying, along with the Selma and Leila, the relative freedom in the independence accorded them by their flat and social circles.

However, looming over them is an ever present traditional reality, a constant reminder of the restrictions and expectations pressed upon them as young women. A look over your shoulder and behave differently in front of parents culture that stifles the women.

The film’s narrative sets itself up to examine the sacrifices these women have to make. Selma falls in love with trainee doctor Dounia (Ashlam Canaan), but must keep her lesbian relationship a secret from her parents. Leila’s involvement with Ziad (Mahmud Shalaby) is compromised by actions that contradict his seemingly progressive attitude and Nour’s fiancé Wissam, a pillar of the religious community, exposes himself for the controlling, ugly husband he was destined to be.

In Between is dressed in a glossy coat reminiscent of Sex and the City and the plot plods along in a fairly predictable manner. The film’s greatest accomplishment is the foregrounding of women and the muted reality in which the action takes place. All three actresses put in strong performances, are wholly believable and the situations they find themselves in have undoubtedly been carved out of the coarse concrete of reality.

Contextually, In Between carries more significance. It’s a Palestinian film that addresses issues rarely touch upon in Middle Eastern cinema. The trio are empowered and sexually liberated, refreshingly so and the film is unafraid to dip its toe into darker waters. However, Hamoud’s examination of the relationship between the three women, the duality of their existence and the struggles that accompany it sometimes only feels surface deep.

In Between is a promising debut from a director with a distinct voice.