It’s often believed that expensive cuts of meat are superior to the often overlooked cheaper cuts available. However, in almost every case, it is the cooking process that’s the most important when meat is concerned. A well cooked piece of offal with almost always taste better than a badly cooked expensive slab of flesh, with […] 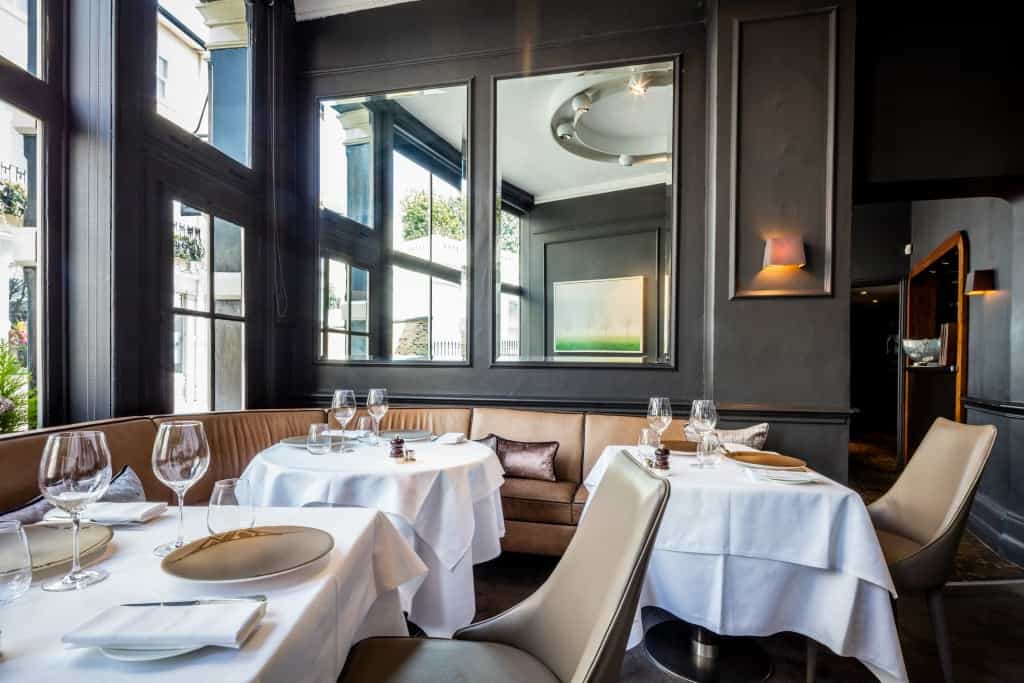 It’s often believed that expensive cuts of meat are superior to the often overlooked cheaper cuts available. However, in almost every case, it is the cooking process that’s the most important when meat is concerned. A well cooked piece of offal with almost always taste better than a badly cooked expensive slab of flesh, with a pork dish from Kensington’s Launceston Place acting as a fine example.

Tucked away on a street of the same name, the Michelin-starred Launceston Place is by no means a new addition to Kensington’s thriving fine dining scene. However, last year saw the appointment of new Chef Patron – Raphael Francois, having previously held positions such as Executive Chef at Helene Darroze at the Connaught. Taking over the ground floor of a Georgian townhouse, the dining space is decorated with elegant minimalism, punctuated by works of modern art. There’s also a comfortable amount of space between tables, which is refreshing in an age of sky high rates and a constant increase in competition.

Francois’ new menu is very much a celebration of modern European cuisine, with an extremely flagrant focus on high quality ingredients. To begin, both starters were of an exceptionally high class, setting the bar impossibly high for what was yet to follow. A scallop the size of a toddler’s fist was served with a melody of ripe blackberries, peas and their shoots, arriving alongside a miniature cocktail shaker. This contained a nuclear green pea mojito spiked with a generous splash of white rum, shaken at the table and poured atop the dish in place of a sauce. As expected, the freshness of peas worked especially well alongside the delicate raw scallop and the piercing sharpness of the blackberries. Next, a Hen’s egg was cooked to perfection for exactly one hour in a water bath at 63 degrees  and joined by asparagus spears, prosciutto and mushroom duxelles. As a result of the egg’s cooking method, the soft yolk worked like a rich sauce in perfect harmony with the other ingredients to provide a plate of rich, earthy goodness, with a particularly brilliant balance of flavours.

Next, a fillet of sea bass had escaped from the pan a mere matter of seconds before being overcooked, presented alongside marbles of pickled butternut squash and pear. The combination of the earthy squash and sweet pear did work in perfect harmony with the well-seasoned tranche of fish, but although adding further depth of texture, the grains of toasted rice were unnecessary. These brought very little to the dish, besides an appearance similar to that of something recovered from the fisherman’s bait box.

Then came my pork dish, chosen as an avid lover of pork belly, which when cooked properly is arguably the tastiest cut of pig, by quite some margin. Instead, the belly that the menu emphasised with its bold type font was the size of a domino, with a chop of expensive Iberico pork instead taking the dish’s central focus. Taken from the Iberian breed of pig fed on acorns, resulting in a distinct nutty flavour to the pork, plus a beautifully marbled fat, the chop came as a pleasant surprise – arriving at the table beneath a glass dome of smoke from singed hay. This particular breed of pork is amongst some of the world’s finest, and thus deserves to be cooked properly, at the very least – alas, this was not. Being of such astounding provenance, it is safe for Iberico pork to be served pink, delivering an incredible depth of flavour and succulence. Instead, the pork had been so overcooked that even a sabre toothed tiger would have struggled to chew through the meat that ended up going back to the kitchen half eaten. A crying shame, given that it was served and presented with such theatrical charm and that the tiny morsel of pork belly was cooked so impeccably well. I’d choose a cheap, fatty slab of well-cooked pork belly over a poorly executed cut from an expensive breed at any given occasion.

To finish, my companion’s dish of chocolate, cherry and pistachio was delicious, comprising blobs of chocolate accompanied by a tart cherry sorbet and crumbed pistachio cake. Meanwhile, I was unable to resist the temptation of the cheese trolley, with around 25 choices, served with our waiter’s depth of knowledge. And like the rest of the meal, Head Sommelier Piotr Pietras’ wine pairings were remarkable, making his reputation as one of the industry’s finest seem understandable.

Launceston Place demonstrates an exceptional amount of promise, from the mostly brilliant service, a dumbfounding wine list, and food that’s for the most part good. Alas it was the slightest of errors that sadly marred the mains section of the menu.