By Jonathan Hatchman, Food Editor, @TLE_Food Best known for his simplistic style of cooking, attempting to make the kitchen an approachable environment for even the least competent of cooks, celebrity chef Jamie Oliver has recently introduced a new Sunday menu to the mother ship of his restaurant empire – Fifteen. Proving a welcome break from […] 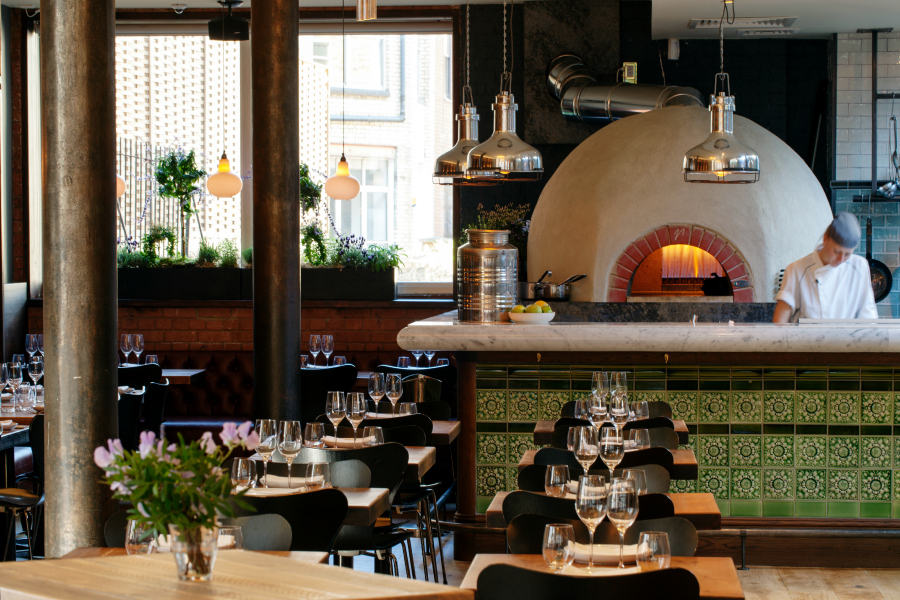 Best known for his simplistic style of cooking, attempting to make the kitchen an approachable environment for even the least competent of cooks, celebrity chef Jamie Oliver has recently introduced a new Sunday menu to the mother ship of his restaurant empire – Fifteen. Proving a welcome break from the a la carte menu that’s on offer throughout the week, Jamie’s Sunday roast menu provides a reasonably priced, informal dining experience, while the food on offer is still just as pleasurable as would be expected from the renowned institution.

Having opened way back in 2002, before the Old Street area had become the trendy hot bed that it is today, the interiors of Fifteen are quintessentially East London, albeit without any pretentiousness, set-up as a restaurant with a unique apprenticeship programme that encourages disadvantaged young people to unlock their culinary talent through a training programme. What’s more, all of the restaurant’s profits are donated to the restaurant’s own charity – The Jamie Oliver Food Foundation.

So, having enjoyed our trip to Jamie Oliver’s City Steakhouse – Barbecoa – at the tail end of 2014, I decided to head along to Fifteen to sample the new Sunday Roasts on offer. To start, there’s a fair selection of hearty dishes, featuring the likes of Broad Bean and Pea Soup (£6), a big bowl of Exmouth Mussels (£9), a tasty cured Salmon dish (£10) that’s accompanied by refreshing Cucumber and pickled Fennel while the Clarence Court Poached Eggs (£8) are absolutely remarkable. Two perfectly cooked Eggs served with Spinach, Hollandaise and Smoked Ham (a little more of which would’ve been preferred to add an extra element of saltiness to the rich Egg yolk). As expected, the dishes on offer at Fifteen aren’t served with the Scientific precision of some of the City’s other renowned restaurants, however there’s a rustic charm that’s delivered, providing that comforting homely sensation that’s rather compelling. Meanwhile, as far as the mains are concerned, there’s a small selection but everyone is catered for. There’s Roasted Hake (£17), Vegetarian friendly Spinach, Onion and Ogleshield Quiche (£15), and three more traditional Roasts that include Pork Belly (£17), Beef Rump Cap (£19) and a whole Rotisserie Chicken (£34) that’s available for two to share. Each of the latter three arrive at the table served with Seasonal Vegetables, a Yorkshire Pudding and Gravy, as well as a couple of marvelous Duck Fat roasted Potato cakes, so delicious that they overrode the also delicious Beef (cooked Medium-Rare which is always a plus) and the perfectly crunch Pork Crackling.

By the time we’d finished our mains, Dessert was massively unnecessary, but who could resist a succulent Roasted Pear served with a crumbly Spiced Cake (£7), a sensational compliment to the Spiced Rum twist on a classic Old Fashioned cocktail to complete a hugely enjoyable Sunday lunch experience.

Fifteen can be found at 15 Westland Place, London, N1 7LP