By Chris Moss  With two major city-centre retail developments completed over the past few years to compliment its historic arcades and renowned Briggate shopping street Leeds is quickly becoming the shopping capital of the north. Following the opening of the “outside-in” Trinity shopping centre which boasts 120 shops, restaurants, bars and a cinema the newly-erected Victoria Gate […]

by Guest Contributor
in Food and Drink, Promoted, Restaurants 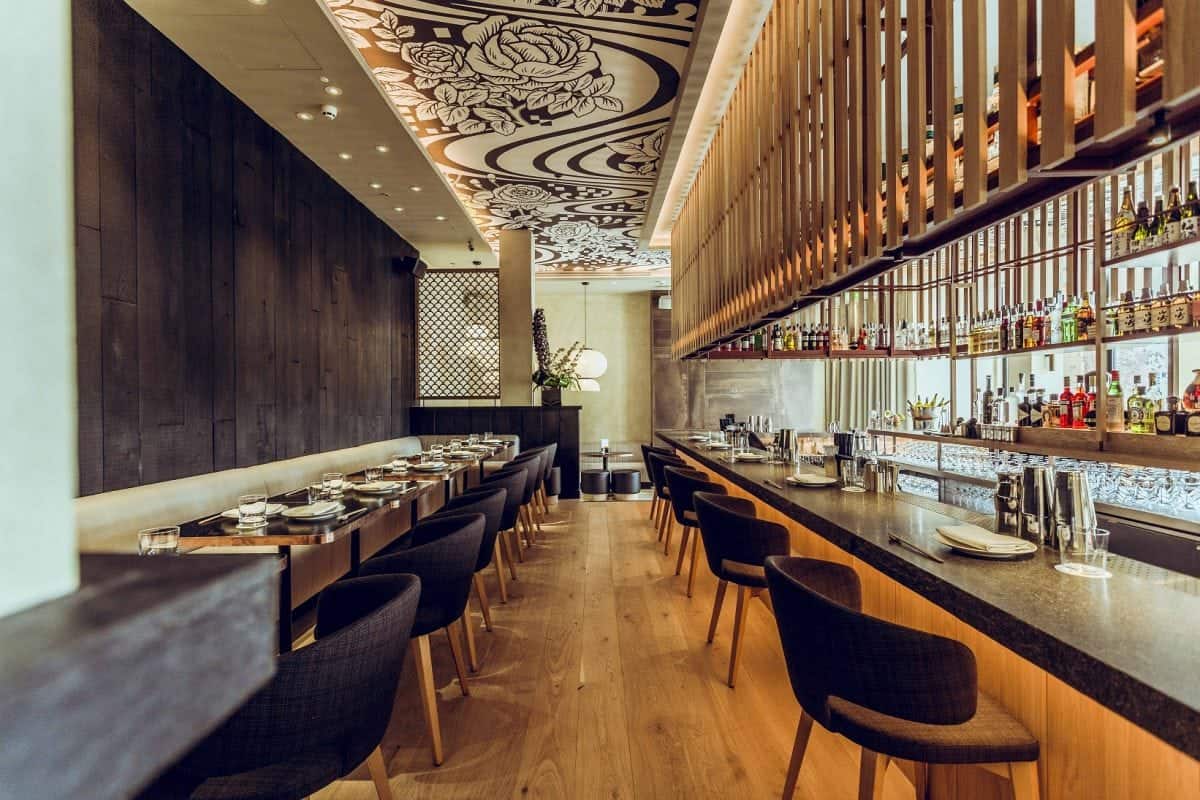 With two major city-centre retail developments completed over the past few years to compliment its historic arcades and renowned Briggate shopping street Leeds is quickly becoming the shopping capital of the north.

Following the opening of the “outside-in” Trinity shopping centre which boasts 120 shops, restaurants, bars and a cinema the newly-erected Victoria Gate was opened late last year which is Dubai-esque in stature.

The glittering arcade draws on digital wizardry and the city’s rich textile past and brings flagship John Lewis to the city after a long hiatus. A glittering casino and a smattering of cafes and bars litter the new development, and top-class restaurants are abound.

One of which, situated on the rooftop of the brand-new development, is the contemporary Japanese restaurant & bar; Issho. Having only opened on 21st June 2017, the restaurant was still in its infancy when we arrived 2 weeks later. It is split into different areas, the first of which is the swanky Kori Bar that we walked through before reaching the dining area.

As we entered the main restaurant area the first thing that catches your attention is the amazing smells coming from the semi-open kitchen. Multiple chefs are cooking at different stations and the mixture of smells and flavours got our taste buds going before we even looked at the menu.

Issho means “together” in Japanese, and as we took our seats the waitress informed us that the restaurant served Japanese tapas style courses and that lots of the dishes are made for sharing. She suggested three or four courses each and then gave us a brief but insightful overview of the different sections of the menu. The menu is simple and helpfully separates the different types of dish such as raw, tempura, sushi, robatayaki etc. Whilst we decided on which dishes to go for we ordered drinks from the cocktail menu. I went for the Yuzu Bramble which is a deliciously refreshing Gin and lemon based cocktail, and my wife went for the Issho Tinkle consisting of vodka, elderflower and prosecco with cucumber which is very tasty. Both went down far too easily which is always a good sign when drinking cocktails.

We ordered our food and in customary tapas fashion they each arrived as they were ready. Our first dish was Spicy Pork Bao Buns which were delightful. The bun was so light and tasty and the pork was delicious. We were very impressed and looking forward to what was to come.

Next up was the California fresh crab mayo, avocado and tobiko from the Maki section and the Beef fillet with smoked chilli Robatayaki which were both excellent. These were followed by the dish we were most excited but also quite reserved about, Unagi: BBQ eel. Neither myself nor my wife have tried it before and we weren’t sure what to expect but I can honestly say it was fantastic. We went for the Nigiri option which comes on a bed of rice and we were both very impressed with how good it was.

Our final dish was the Robata duck breast, pickled nashi pear with spring onion sauce and it really was a case of saving the best until last. It was simply outstanding. I’ve never eaten duck that was as juicy and tender as I did at Issho, I could feel my mouth watering as I was eating it.

The food really was brilliant, and lots of the dishes come with wasabi paste and ginger on the side which give a nice little kick and really compliment the food.

Throughout the meal we drank a bottle of the Blanc de Blancs Sec, Cuvée Jean Paul house wine which we both thought was delicious and went perfectly with the food we had. After we finished eating we took our drinks through to the Kori Bar where we ended the night. The Kori Bar serves a number of cocktails and has an outdoor terrace which offers views across the city. The seats on the terrace are incredibly comfortable and it was a perfect setting to relax with our drinks after enjoying the excellent food.

The whole place is beautifully decorated and there’s a wooden theme running throughout which even continues into the toilets. We arrived at 7pm when the restaurant was pretty quiet and by 8pm it was full. But despite being busy it still felt private and personal, each table is lit by an individual spot light and unlike many other restaurants you can’t hear conversations from other tables which gives diners an intimate, personal feel. The restaurant also has counter seats in front of the semi-open kitchen for those who wish to watch the talented chefs in action.

As you would probably expect from its location Issho is quite a posh restaurant (even the stairs leading up to the restaurant are impressive) but it is in no way pretentious. The staff were all excellent and extremely attentive, and the prices are very reasonable as well.

We had a lovely night there and we will definitely be going back to try out some of the other dishes.