By Mischa Mack Light pours in through a wall of windows; whirring fans sway – suspended from a high ceiling; banquettes and chairs are upholstered in olive green velvet and leather; fine glassware sparkles on marble tables; designer lamps and distressed mirrors adorn the walls. Doors open onto an elegant, awning-covered terrace. This is French-colonial […] 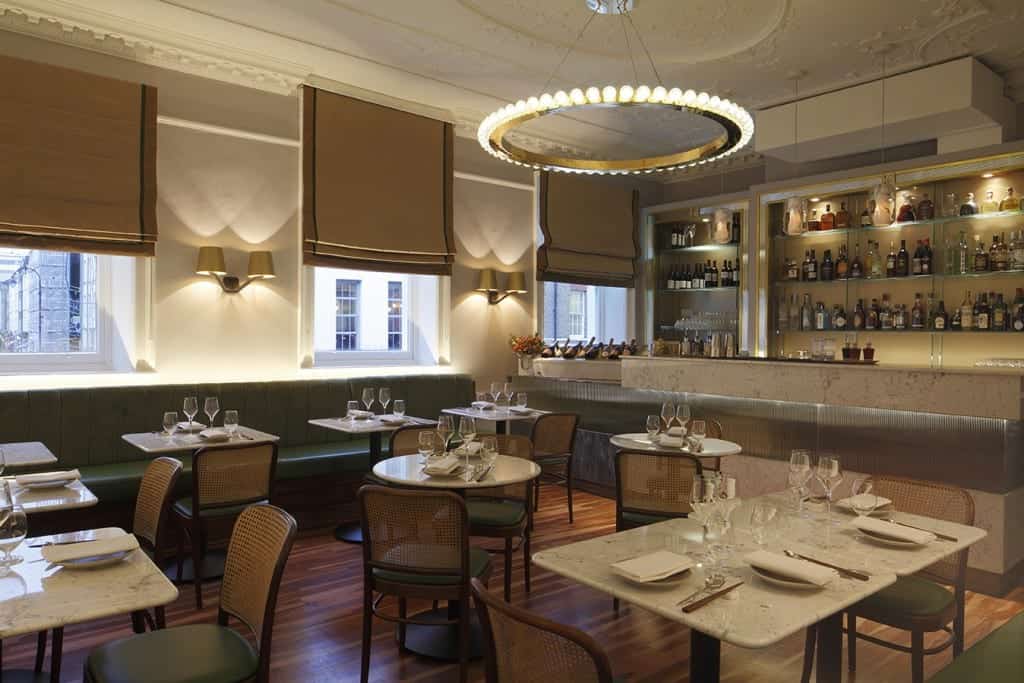 Light pours in through a wall of windows; whirring fans sway – suspended from a high ceiling; banquettes and chairs are upholstered in olive green velvet and leather; fine glassware sparkles on marble tables; designer lamps and distressed mirrors adorn the walls. Doors open onto an elegant, awning-covered terrace. This is French-colonial Hanoi, recreated in a four storey townhouse in the heart of Fitzrovia – an unlikely location for a Vietnamese restaurant, and all the more fascinating for it.

House of Ho’s new flagship restaurant is situated at the point where Percy and Charlotte Street meet. Its elegant interior really has the feel of a house; above the main restaurant, staircase after staircase leads into an assortment of private dining rooms, from an intimate space for six to a top floor lounge with bar and DJ decks. Chef Director Ian Pengelly, widely regarded as the capital’s authority on Pan-Asian cuisine, started out aged 16 as a kitchen porter in a Northamptonshire country club. Now in his mid-forties, Pengelly’s previous posts include launch Head Chef of Pan-Asian E&O Notting Hill and Harrod’s luxury Chinese Chai Wu, and Executive Chef of Gilgamesh in Camden.

At House of Ho it’s obvious that Pengelly knows and understands Vietnamese cuisine – he’s spent a lot of time there and has vividly captured the essence of the country’s vim and victuals, taking his passion and expertise and put a pioneering spin on it – reflecting on Vietnam’s past whilst adding a cutting edge to the cuisine. We started with a Vietnamese Scotch egg. The origin of the Scotch egg is ambiguous but, seemingly, the Scots had nothing to do with it. Fortnum & Mason claims to have invented the portable snack in its Piccadilly headquarters in 1738 to serve its wealthy customers; others suggest the concept came from Medieval India, inspired by a dish named ‘Narcissus meatballs’.

Either way, in its Vietnamese incarnation, it’s very pleasing. Sliced in two and served on a slate, sprinkled with grated Nepalese salt – believed to be the purest in the world – the egg was cooked exactly as I’d hoped (firm buy gooey); minced pork mashed together with noodles makes for a more interesting texture than your average Scotch egg; and this amalgamation, plus the crispy-fried coating, creates a taste as full-on and satisfying as a full English.

Choosing from menus in Vietnamese restaurants can be tiring – a little like being presented with the Yellow Pages. Saving you from blind pin-the-tail-on-the-dish decisions, House of Ho has a sympathetically spartan selection Pho, dumplings, rolls, salads and ‘Signature Sharing Dishes’. Pho is a classic dish but often struggles to deliver character beyond its watery base. Our beef one was different: the homemade broth was rich, the cuts of beef tender, the noodles fat with bite, and the accompanying condiments – chillies, limes, mint leaves and fish sauce made it zingy and colourful. A meatball of an off-putting greyish pallor was the only unwelcome component – an unnecessary addition to an otherwise dynamite dish.

The soft, shiny, fluffy bun Bao (stuffed steamed buns), each one’s middle oozing more-ish sticky duck, had been finished in the pan, masking the usual anaemic look of this doughy dish with healthy browning. Our signature sharing dish – smoked organic duck breast – was perfectly pink and juicy in the middle, served with vibrant carrots and spring onions, and scribbled across with a sweet but subtle miso sauce. Overall, the stand-out is the Saigon chicken salad, presented in a plate-size prawn cracker densely embedded with sesame seeds, the combination of red cabbage, grapefruit, chicken, mint and salad leaves resulted in a striking dish with a punchy personality.

Whilst the waiters are graciously attentive, the speed at which the courses appear may be a little too colonial for some people’s liking. The House of Ho will likely transport you atmospherically, aromatically and gastronomically but you can’t be in a hurry. When it came to what they call their ‘Happy Endings’, there was no hesitation from me: warm green tea fondant with passion fruit and vanilla ice cream, please. Hearing, however, that this would involve extra time, we settled for the exotic fruits platter – a satisfied ending rather than what would probably have been an exultant one.

House of Ho can be found at 1 Percy Street, London, W1T 1DB.