By Jonathan Hatchman, Food Editor   Upon approaching acclaimed chef Mark Hix’s first outpost situated south of the river, you’d be forgiven for instantly relating the neon signage and general exterior demeanour to one of those seedy clubs in Soho. However, after being escorted through a corridor that contains just one of the restaurant’s impressive […] 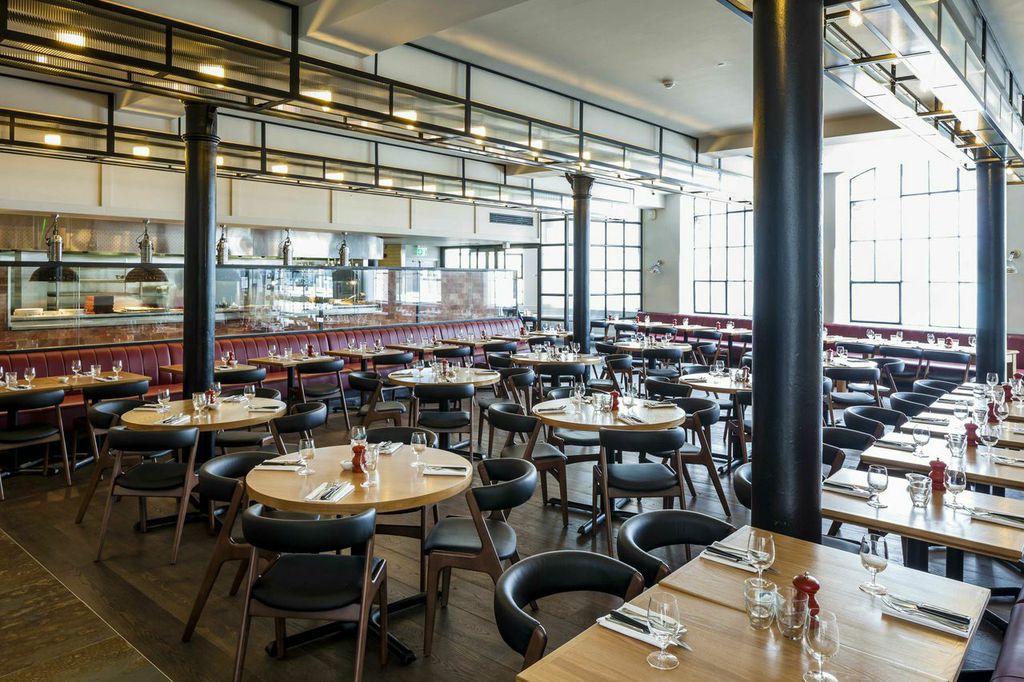 Upon approaching acclaimed chef Mark Hix’s first outpost situated south of the river, you’d be forgiven for instantly relating the neon signage and general exterior demeanour to one of those seedy clubs in Soho. However, after being escorted through a corridor that contains just one of the restaurant’s impressive bars, you’ll end up feeling comforted by the unexpectedly airy dining space (unless a trip to a sordid bar and an STD was, in fact, what you were after in the first place, then again you could always head downstairs to Mark’s Bar and admire the stickman porn wallpaper in the Gent’s toilets). Comprising modern décor that features bare brick and metal work, high ceilings and wooden floors that lend that factory feel. The building was once used as a metal box factory, so the industrialised interiors that surround the busy open kitchen surrounded by Himalayan salt bricks do seem fitting.

As far as the menu is concerned, Hixter Bankside follows its big sister Tramshed, in Shoreditch, very closely. Offering a selection of Chicken dishes reliably sourced from Swainson House Farm in Lancashire, as well as Beef dishes that have all been aged in a Himalayan salt chamber (hence the decorative salt bricks) in Northern Ireland. With a range of varying steak cuts, most of which are larger and place an emphasis on sharing. Meanwhile, the starters are all seasonal and reasonably priced. Between our party of two we settled for a reasonably priced, well-risen Yorkshire Pudding (£3.95) served with a generous portion of whipped Chicken livers. Perhaps strange considering the traditional Yorkie and Beef pairing, albeit most appetising. Also, there’s the Cock ‘n’ Bull Croquettes (£6). Simply two chicken and two beef, respectively filled with stuffing and mash before being breaded and thrown into the deep fryer to reach a level of perfect rich, crispness.

Moving on to the main courses, having heard nothing but good things about Hix’s famous short ribs we both struggled to resist the slow-cooked top rib (£18.50), served on the bone with Somerset Cider braised Cabbage. Upon placing the order, we were informed that the popular dish had sold out during the busy lunch service, with our helpful waiter having to check with the kitchen to make sure that the next batch, needing to cook for four hours, would be ready in time for us to enjoy. Indeed, we were lucky in that sense, yet although the taste of the rib was superb, the cooking process had obviously been rushed. Instead of tucking into a succulent melt-in-your-mouth slab of meat, the cut was less tender and chewier than we’d have expected. This was disappointing considering the restaurant price of one of the Cow’s cheaper cuts, not to mention the amount of hype that we’d heard about the restaurateur’s dish. Perhaps a classic marbled steak or one of the superbly presented roast chickens would’ve been much more enjoyable

Thankfully, Dessert was much more impressive. Although the likes of Bramley Apple Pie and Salted caramel fondue are always intriguing finales, it was the Credit Crunch Ice Cream that aroused our taste buds. Priced at £1.90 per scoop, the Vanilla Ice Cream laced with delicious Peruvian chocolate and crunchy Honeycomb is served with a rich warm Chocolate sauce.

There’s nothing dreadfully wrong with Hixter Bankside, the experience was just let down by the main that failed to meet high expectations. Had we attended the lunch service or have opted for a simple Steak, perhaps the evening would’ve been more outstanding?