Sustainability is undoubtedly the buzz-word of the moment, it seems bars and restaurants are like crafty robbers working through the night, throwing away all the plastic and introducing vegan menus “showcasing” ingredients such as carrot sticks and broccoli rice. It would seem it is no longer sexy to destroy our planet, and as with anything […]

by Sara Al-Ali
in Food and Drink, Restaurants 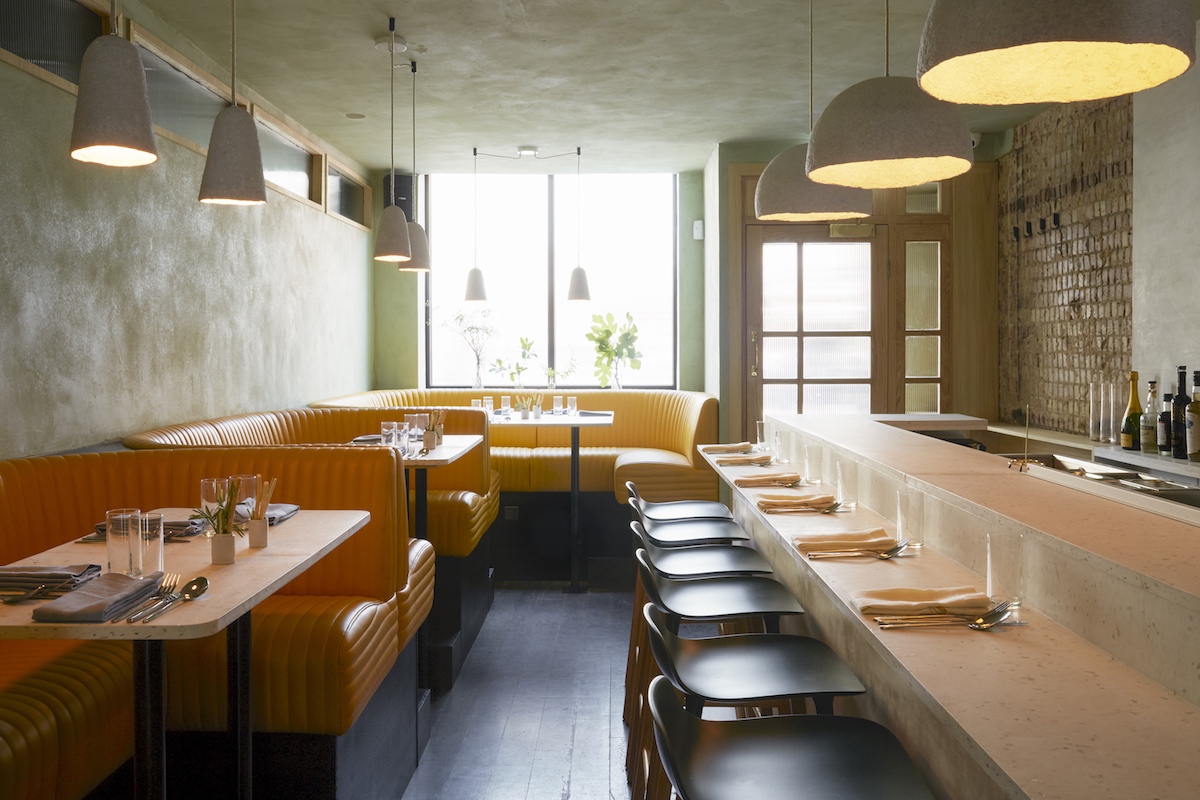 Sustainability is undoubtedly the buzz-word of the moment, it seems bars and restaurants are like crafty robbers working through the night, throwing away all the plastic and introducing vegan menus “showcasing” ingredients such as carrot sticks and broccoli rice. It would seem it is no longer sexy to destroy our planet, and as with anything that becomes trendy in a city like ours, we are left sifting through the shit to find the real deal. CUB is a collaborative project between Ryan Chetiyawardana and chef Doug McMaster, it’s amongst the few genuine articles in London, as soon as you step into the restaurant, any concern of this being just another gimmick driven cult hotspot fades away.

The décor is how you might imagine your dream home to be if you were effortlessly cool enough to live there. The tables are made from reused yoghurt pots; the walls and lampshades from recycled clay. It’s calm and playful with colour tones of greys, greens and illustrations of body parts on the bathroom doors, but best of all is the mustard yellow curved booth seating for every single table. As someone who would unashamedly push a grandma out the way for a good booth seat in a restaurant, CUB is already racking up some serious points.

The set menu is a six-course vegetarian feast with paired cocktails (some boozy, some not, one wine) for a somewhat reasonable £67 per head. First comes the Krug Grande Curvée with a water jelly mouthful, served with lettuce hearts and a healthy dollop of moreish hollandaise sauce as well as elderflower, seaweed and a fennel cracker topped with sharp blood orange roe: exciting and delicious pockets of flavour.

I see our next cocktail come dancing over. It’s a nettle, watercress and pear drink with a small garnish bush. It tastes like British springtime and evokes memories of freshly cut grass and muddy knees. This is served with Alexander (often known as ‘horse parsley’) cabbage and Lapsang Souchong – a lip smacking dish with a good level of acidity. A complete lack of textural contrast does somewhat mar the balance of flavours’ brilliance, nonetheless. Then comes the artichoke hay smoke broth with thick slabs of E5 Bakehouse bread and butter. The bread is somewhat dry yet a comforting slurp of liquid instantly delivers childhood memories of Bovril. An astonishing feat considering the complete lack of beef stock.

The only wine on the menu is a Mise du Printemps Pinot Blanc, fresh and light to accompany arguably the most interesting course on the menu: baby celeriac, leek and coffee husk. Using parts of the vegetable and ingredients that would have otherwise been wasted, with surprising flavours that wouldn’t ordinarily be put together. A heavy hit of garlic is followed by a sweet, earthy hum of hazelnut, married with the texture from the husk. It’s a definitive example of what CUB is about: complex, intriguing, honest.

Then comes the sprouted grains, abalone mushroom and sauce made with Toast Ale – which uses surplus bread in its production – making a clear statement that meat doesn’t have to have a place on the plate. The creamy ale foam elicits the same reaction as cookie dough Ben & Jerry’s ice cream. Just pass me the spoon. The accompanying cocktail of Chanteclair Amazake, Bruichladdich whisky and black cardamom is fortunately sour and cleansing.

We finish with what’s described as hogweed, pear and lemon thyme: the least exciting plate on the menu (especially given my completely rational fear of any form of popcorn mixed with desserts). In fairness, though, it’s one of the best examples I’ve tried. The concluding cocktail speaks my language though. A lacto rhubarb, Cognac, cacao husk taster is a great example of nature working at its best, with a milky texture. A sweet and strong ending to this clever and thoughtful menu. An enjoyable first meeting between me and Mr CUB.