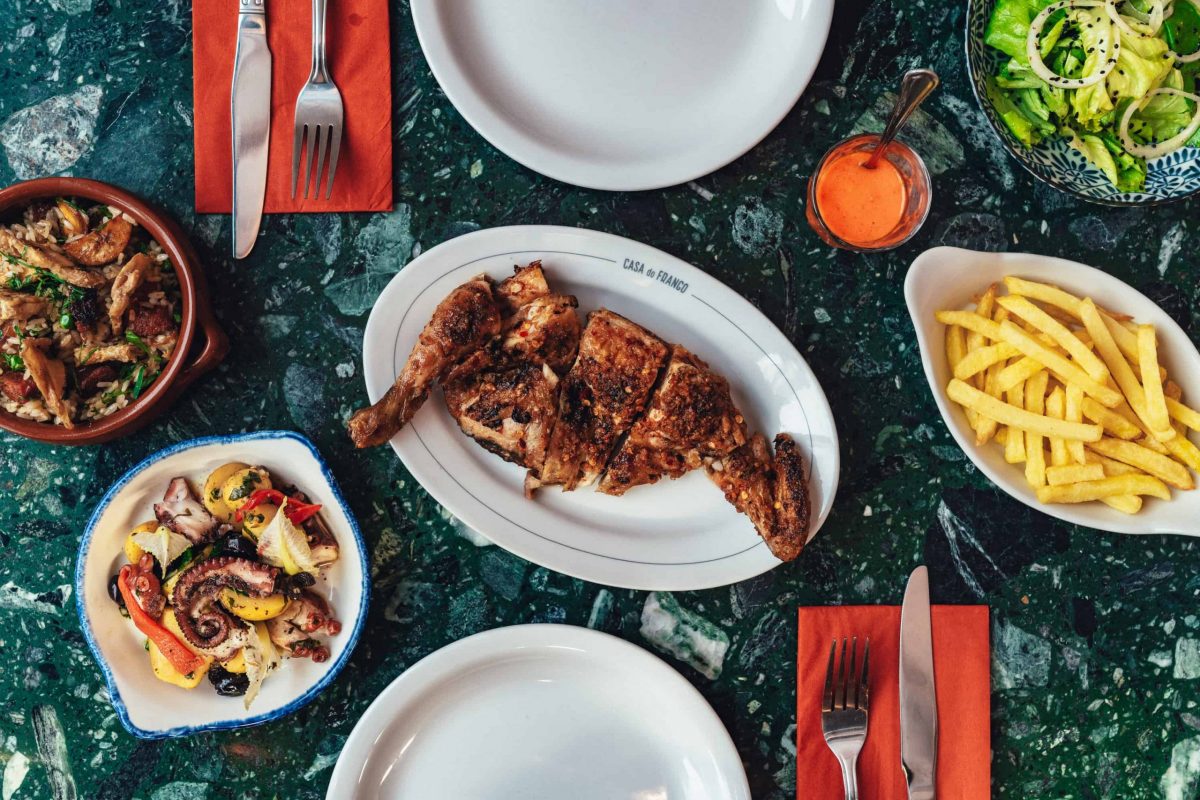 Literally meaning “house of chicken”, Casa do Frango has become particularly renowned for its piri piri chicken since opening on Southwark Street in 2018. Just 18 months later, the founders have opened a sister, Casita do Frango, in the Arcade Food Theatre at Centre Point, and a brand new Shoreditch restaurant.

Occupying a corner site just off Shoreditch High Street, the new restaurant is considerably bigger than the south London original, set across two floors. On the ground-floor, the bar is joined by some café-style seating and serves a concise pesticos menu (Portugal’s equivalent of tapas), while a pasteleria is the ground-floor’s main focus. Here, the restaurant’s exemplary pastéis de nata are baked on site. Upstairs, the main dining room has an open kitchen and is decorated with warm colours, foliage and bench seating that’s awash with natural light during the day, cascading through the floor-to-ceiling windows. The space is generally charming, as is the polite, efficient service.

As for the food, piri piri chicken remains a key focus. While the origins of piri piri aren’t exactly clear – the malagueta pepper has roots in South America and Africa – it’s particularly synonymous The Algarve in Portugal, specifically the small town of Guia. Half-Portuguese co-founder Marco Mendes regularly visited restaurants in The Algarve as a young child and the area’s piri piri chicken holds fond memories. “People tend to overlook or underestimate chicken,” he told Big Hospitality in a recent interview, “but it can be an amazing dish.”

Marinated with piri piri (also available with oregano, or lemon and garlic), the restaurant’s signature dish comprises half of a chicken precisely cooked over a wood-fired grill (£10). It’s perhaps unsurprising that the dish has received plenty of Nando’s comparisons, but it’s considerably better, more authentic and only marginally more expensive. Even better when washed down with a cold glass of Adega de Monção vinho verde from the exclusively Portuguese wine list.

Elsewhere on the menu, bacalhau fritters are archetypal, filled with a mixture of Atlantic salt cod and silky mashed potato, enlivened by a suggestion of tomato and some piri piri sauce (£6). Charred cauliflower, on the other hand, is firm and accoutred by some coriander yoghurt and pistachio nibs (£8) – not particularly revolutionary, but enjoyable nonetheless.

Like the chicken, king prawns are cooked on the wood-fired grill – remarkable in their simplicity, finished with just some garlic, parsley, white wine and piri piri sauce. Grilled chorizo is similarly simple yet impressive, rampant with paprika and accompanied by some guindilla peppers and a large blob of black olive mayonnaise (£6).

In regard to sides, the Montanheira salad is prettily presented, harbouring tomato, green pepper, cucumber and onion, finished with oregano – a healthy option that doesn’t seem like a subterfuge (£4). The African rice, however, is a must-order (£6). Firm grains of rice are studded with peas, hunks of plantain, chorizo, and shards of crispy chicken skin. While the menu has a format geared towards sharing, you’ll want to order a portion of the African rice all to yourself. A selection of Portuguese desserts are available, but the pastéis de nata are the main draw. The classic is a superlative example, with the custard ensnared by a fortress of crisp, layered puff pastry.

Casa do Frango has huge roll-out potential given its accessibility, though the food is significantly better than that found at typical chain restaurants in the same price bracket.