A promising new neighbourhood-style restaurant with a Greek and Eastern Mediterranean-inspired menu. 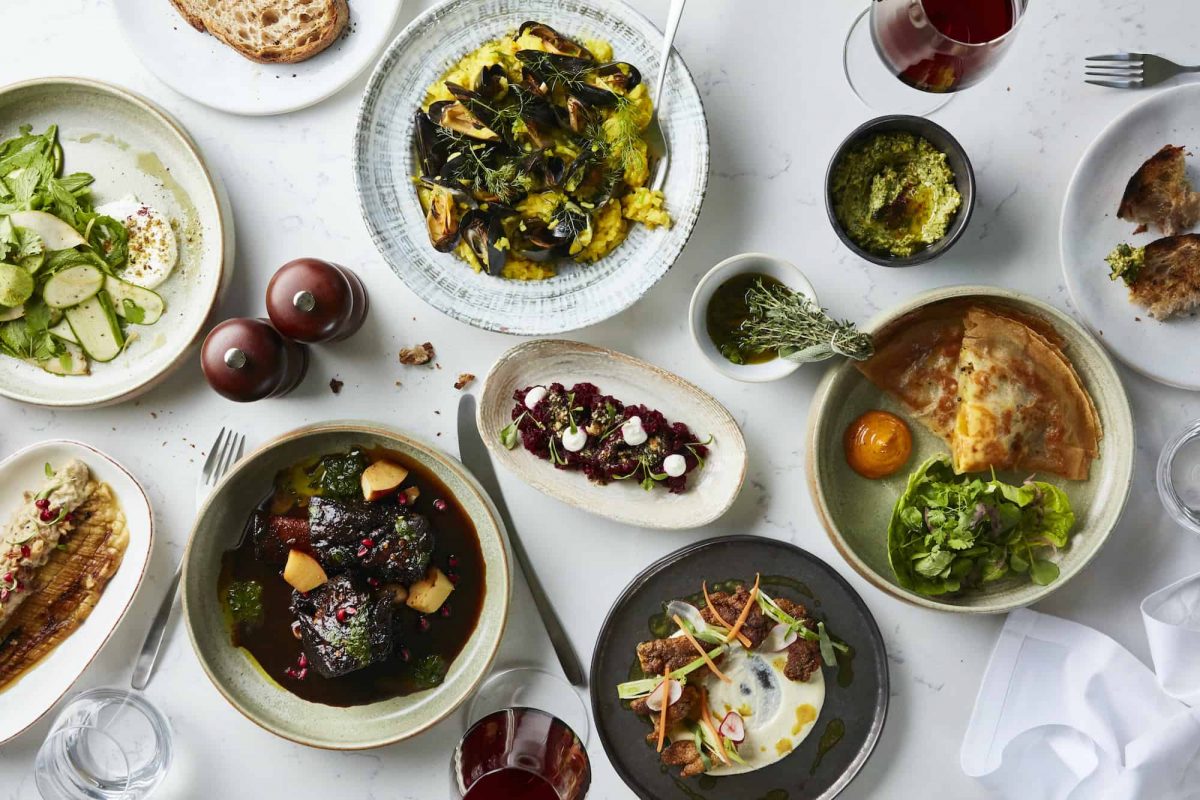 At the time of writing, Charlotte Street is home to around 25 restaurants. Along with a number of standalone bars and pubs, the Fitzrovia street is one of central London’s most overcrowded hubs for food and drink. Opened at the start of this year, Ampéli, however, is a fresh aberration to the parade of upmarket mini chains and fine dining institutions.

Meaning ‘vineyard’ in Greek, Ampéli occupies the former Señor Ceviche site, set across three floors. Opened by Athens-born photographer, Jenny Pagoni, the neighbourhood-style restaurant has a prominent focus on wine, and a food menu that reads like an absolute dream.

Greeted by a bar, the ground-floor space is festooned with booth seating, joined by further tables on the mezzanine, awash with hues of pale green and rich brown. A nod to Pagoni’s artistic career, the walls also display works from various Greek artists, including water-colourist Leonie de Lange, and sculptor Vasiliki Maliopoulou, who crafts works from reclaimed materials found along the Greek coastline. Overall, it’s a comfortably space, giving Ampéli a distinct neighbourhood feel, as if it’s in a leafy north London suburb, rather than spitting distance from Oxford Street.

In the kitchen, Oren Goldfeld (formerly at Nopi, Brother Marcus, and Toto in Tel Aviv) serves a very long menu of Greek and Eastern Mediterranean-inspired dishes, intended to be shared. During a dinner visit, a waiter gave an awkward explanation into the concept of sharing, as though almost every London restaurant to have opened in the past five years didn’t have a similar model; lingering as if waiting for applause. A small teething problem simple enough to overcome, I’m sure.

As for the wine list, all bottles are sourced from mainland Greece and the islands, curated by Yiannis Karakasis, a Greek Master of Wine and drinks writer. Here, the indigenous list focuses on both innovative and disruptive producers championing native varietals. A glass of Tselepos’ Amalia Brut works as an interesting aperitif, produced in the traditional fashion, with fine bubbles and elegant with refreshing acidity.

To follow, Ampéli’s home-cured tuna “pastirma” was exemplary, cleverly mimicking air dried beef, though the mattress of fava purée slightly overwhelmed the fish, given its bulk. Better was a dish of “Jewish chopped chicken liver”: gently spiced, generously seasoned and texturally sating, demanding to be spread across an extra round of sourdough. Manti, on the other hand, were very good – relatively large, well-prepared and lavished with a yoghurt sauce, pine nuts and a drizzle of good olive oil.

A dish of saganaki was fine, featuring a well-cooked slab of feta cloaked with thick batter, served with a dollop of cherry tomato jam. A drizzle of honey would have been welcome, however, to bring a little more to the dish, disguising some of the oiliness. Salt cod croquettes with samphire and yoghurt tartar read like a winning combination yet managed to over promise and under deliver. Alas, the croquettes were somewhat dry, with the little bit of seasoning overpowered by the lactic twang of the yoghurt.

Spiced potato burik was a particular highlight, nonetheless. A crispy filo carapace harboured potato, small brown shrimp and a soft, golden egg yolk which acted as a sauce, amplified by a suggestion of harissa mayo. A gloriously insalubrious comfort food triumph. The main-sized dish of braised short rib was another jewel in the menu’s crown, cooked to the point of softness rather than complete submission and served on the bone. Assisting in diverting from a course of often overwhelming bovine richness that’s so common with short ribs, the dish was embellished with a dash of date molasses, quince and a whisper of dried Moroccan peppers.

For dessert, loukoumades are often a fail-safe finale, here served with poppy seed custard on the side, drenched with syrup spiked with mountain tea. They’re a well-prepared, modern riff, and although some more honey and sesame seeds would be welcome, dessert provides a strong conclusion. Overlooking some awkward service and slight grumbles easy enough to iron out, Ampéli is a charming new restaurant with plenty of potential.

Ampéli can be found at 18 Charlotte Street, London, W1T 2LZ.