A fresh pasta dish which champions a severely under-appreciated ingredient in the UK. 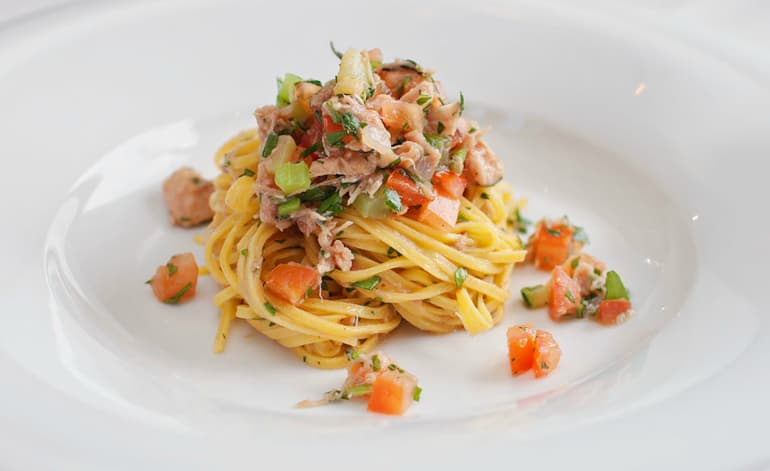 A long-lost restaurant that closed long before the Covid-19 pandemic, I Robert seemed somewhat out of place in its Mayfair location. Significantly different to its sister Novikov Restaurant, also owned by Russian Arkady Novikov, the restaurant was billed as broadly Mediterranean but specialised in Italian food. Unlike the flashy Italian restaurant within Novikov Restaurant, I Robert’s food was humble and largely quite brilliant, with the homely interiors not too dissimilar to the family-run trattorias of Rome. One of the best dishes on the a la carte menu, which deserves to be remembered and recreated, was the signature tagliolini with a decadent rabbit ragout. An ingredient that’s devastatingly under-appreciated in the UK, and thus fairly rare. For this dish, however, a whole rabbit is worth sourcing, taking just over an hour to cook, plus extra for the fresh pasta.

You will need a pasta machine

Bones from the rabbit

To Make the Sauce

In a saucepan, heat some oil and roast all of the bones, once they are brown add the butter and the chopped vegetables, making sure that the butter doesn’t burn.

Once the vegetables start to soften, drain the excess fat and cover with chicken stock.

Let the sauce cook for one hour and then drain and strain.

To Make the Ragout

Debone the rabbit put the bones aside and dice the meat into 1.5cm cubes.

Chop the onion, carrots and celery very finely then in a thick saucepan, heat the olive oil and fry the vegetables for around five minutes, and then add the rabbit cubes and season with salt and pepper.

Cook for around 10 minutes until the meat changes colour.

Cover the meat with the sauce (recipe above) then add the herb bouquet (tie the sage and rosemary together using cook’s string) and cover with a lid.

Let the ragout cook for approximately one hour and then chill.

To Make the Pasta

Place the flour and the semolina into the bowl of an electric mixer, fitted with a dough hook, then add the egg and the salt and mix.

Remove from the mixer, wrap in cling film and leave to rest for at least one hour.

Divide the dough into four equal pieces and flatten each piece with a pastry roller and then pass through your pasta machine set on the widest setting.

Next reduce the setting gradually until you have long sheets – the final sheets have to be 1 mm thick. Cut the long sheet into 20 cm pieces and fold the 20 cm sheet over four times back on themselves. Next, cut the pile as finely as you can into tagliolini.

Bring a large saucepan of salted water to the boil, add the tagliolini and cook for three minutes then drain.

While the pasta is cooking, in another pan roast some of the left over celery, onion and courgette until soft then add the rabbit ragout and bring to boil.

Mix the sauce with the pasta, adding some rabbit sauce if too thick and serve with freshly chopped parsley.