Nando's is perceived to have the highest chicken welfare policies by its customers, when in reality it ranks among the worst in the 'Pecking Order'. 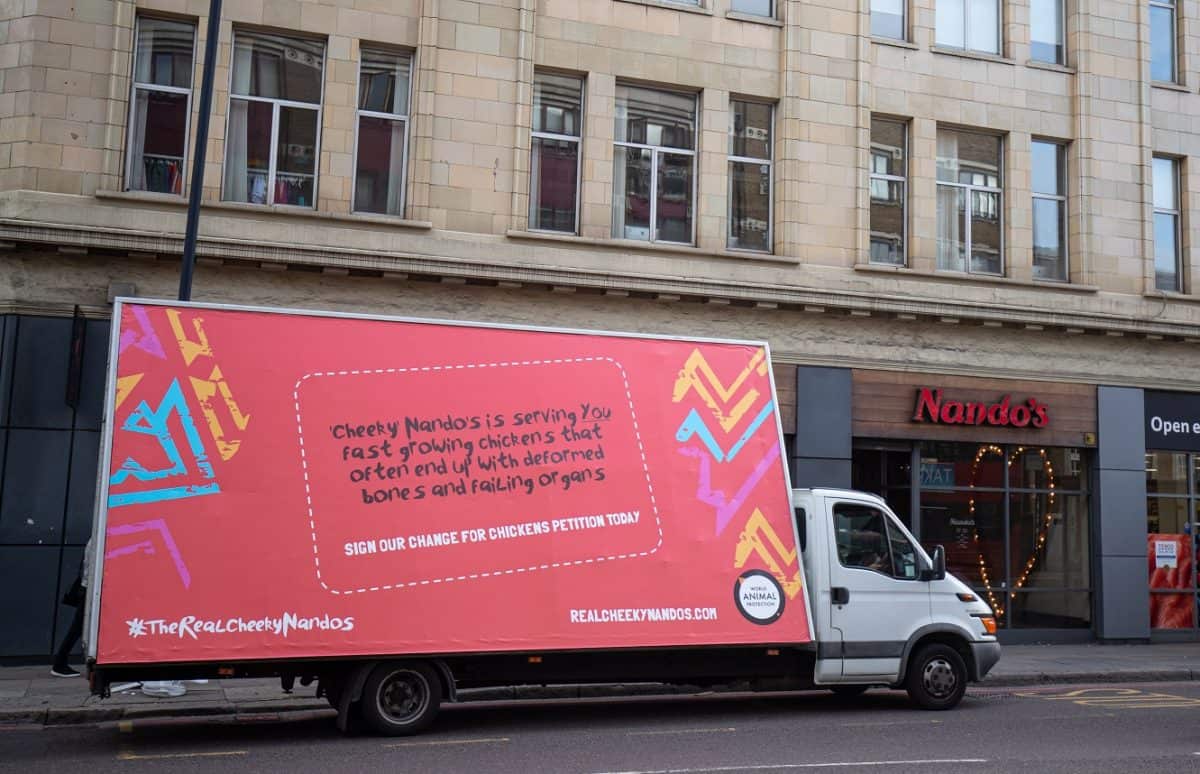 World Animal Protection has launched a campaign calling on Nando’s to urgently improve its chicken welfare.

The #TheRealCheekyNandos campaign is calling on fans of the restaurant to demand urgent action so chickens can live better lives.

Following the news that KFC is the first UK fast-food chain to promise better chicken welfare standards, the campaign group has put another leading restaurant chain under the spotlight to highlight the cruelty and suffering faced by the chickens that Nando’s serves in its restaurants.

Chickens that end up in Nandos’ kitchens often grow so fast they suffer terrible health problems during their short lives, with many suffering from painful deformed legs and heart problems caused by growing too big, too fast.

But despite the poor welfare conditions, over a third (38 per cent) of Nando’s customers believe the chain has the highest chicken welfare policies in comparison to other restaurant and fast food brands.

Indeed, Nando’s ranked above McDonald’s, Subway and KFC for consumer perception of the chains which have the highest chicken welfare, when in reality it ranks amongst the worst.

In World Animal Protection’s ‘Pecking Order’ Report, Nando’s sits in the ‘very poor’ category, alongside other brands such as Pizza Hut and McDonald’s.

Commenting on #TheRealCheekyNandos campaign, Ian Woodhurst, UK farming campaigns manager at World Animal Protection, said: “Our research shows that fans of Nando’s expect better from the family-friendly chain when it comes to the welfare of the chickens it serves up in its restaurants.

“We hope that Nando’s listens to the concerns of its loyal customers. It needs to stop using fast-growing chickens and give its chickens more space to move and behave naturally.

“If not, Nando’s chickens will continue to suffer from catastrophic health issues and live their short lives in unnecessary pain.

“We’re keen to work with Nando’s and help it make the changes that are urgently needed to improve chicken welfare.”

A Nando’s spokesperson said: “Nando’s has been working hard with a range of independent experts on our strategy to address the complex relationship between higher welfare standards, environmental issues and supply-chain management.

“We know that as a chicken restaurant group we have a desire and responsibility to overcome these challenges, identify opportunities and ensure that every aspect of how we source our chicken is done in the best possible way.

“We welcome initiatives like the Better Chicken Commitment and share the aspiration and recognition of the need to change, which we believe needs to be a combined effort across the industry.

“We look forward to keeping everyone updated on our plans as we move forward on this important issue.”