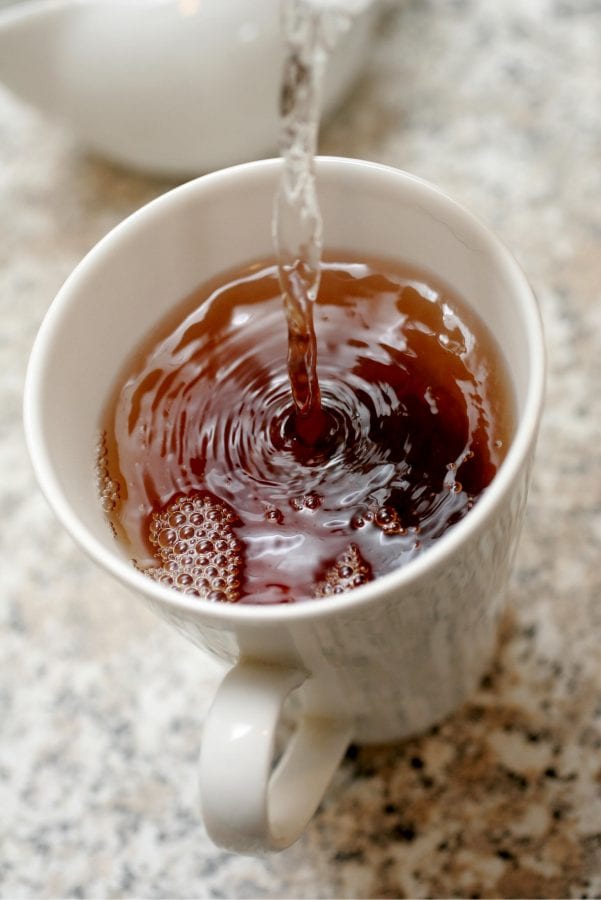 The world’s only natural ‘decaf’ tea containing zero caffeine has been discovered growing in China – and could soon be on sale here.

It means the nation’s massive army of tea drinkers will be able to drink gallons of the stuff – without putting themselves at risk of a heart attack or a stroke.

Many tea tipplers with dodgy tickers have been forced to protect their health by turning to bland decaff tea.

This has been subjected to harsh industrial processes to remove the caffeine.

But now they go au naturel and sup the real thing – without fear of drinking themselves into an early grave.

The health boosting tea – naturally low in caffeine – was unearthed on a remote mountain range.

It could soon provide an option for those who love Britain’s favourite brew – but have an aversion to the stimulant.

The wild plant produces the soothing flavour of the popular beverage – without its explosive jolt.

Named Hongyacha (HYC), it only grows on the steep hills of southern China. Villagers have been sipping it for years.

They say it can it can cure colds, soothe stomach pain and relieve a host of other ailments.

But the structural make up was a mystery. The plant has thrived undiscovered by the the western world – until now.

“However, these methods can affect the brew’s flavour and destroy compounds in the tea associated with lowered cholesterol, reduced risk of heart attack or stroke and other health benefits.

“Hongyacha is a type of new wild tea plant discovered in Fujian Province. This tea is helpful to the healing or prevention of disease in its original growing area.”

He also said the plant, which is taller and more upright than most tea trees, needs protecting so it does not become endangered.

Unlike many industrially decaffeinated products, it could provide “many of the health benefits of regular brewed teas”. His team carried out a chemical analysis of buds and leaves collected during the growing season.

They used a state of the art scanning technique called high-performance liquid chromatography.

This showed it has several potentially health-promoting compounds not found in regular tea.

The plant has a mutation in a gene that fuels caffeine in tea. This prevents it from producing the stimulant, explained the researchers.

Prof Chen, of the Tea Research Institute at the China Academy of Agricultural Sciences, Hangzhou, added: “Naturally low-caffeine HYC could possibly become a popular drink because of its distinct composition and unique health benefits.”

In the UK about twice as much tea is drunk than coffee – 165 million cups a day or 60.2 billion per year.

In 2017, Americans drank nearly 4 billion gallons of tea, according to the Tea Association of the USA. It is estimated almost a fifth of drinks were decaffeinated.

Prof Chen said: “In HYC growing areas, the natural teas from the young shoots of are used to boost the health of humans and heal or prevent illness. Interestingly, HYC has a distinct chemical profile compared with regular tea.”

“HYC, a rare wild tea plant, is only distributed in the narrow mountain area of several villages in Fujian Province.

“Given the increased interest in growing cultivated tea plant and lack of protection awareness among people in the growing areas of HYC, many wild tea plants are being eliminated and endangered.

Nowadays, high trees, such as HYC, are few. An effective protection and management plan is needed for understanding and utilising these tea resources.

“As a newly and naturally decaffeinated tea plant found in China, HYC is gaining increasing attention and usage by the local government and businesses due to its distinct constituents and unique health benefits.

“Our work is helpful for the scientific protection and efficient utilisation of this rare resource.”

Tea has varying quantities of caffeine – a mood enhancer that boosts alertness and metabolism.

But not everyone can or wants to consume it. Regular drinkers may build up a tolerance, meaning they have to down more to get the same effect.

Additionally, basic effects of caffeine may be unpleasant for some and can include restlessness, insomnia and anxiety.

Tea is the only plant that contains L-theanine, an amino acid that promotes calm and relaxation. It works in combination with caffeine to induce a state of mindful alertness.

A cup of tea contains about half the amount of caffeine as a cup of coffee.