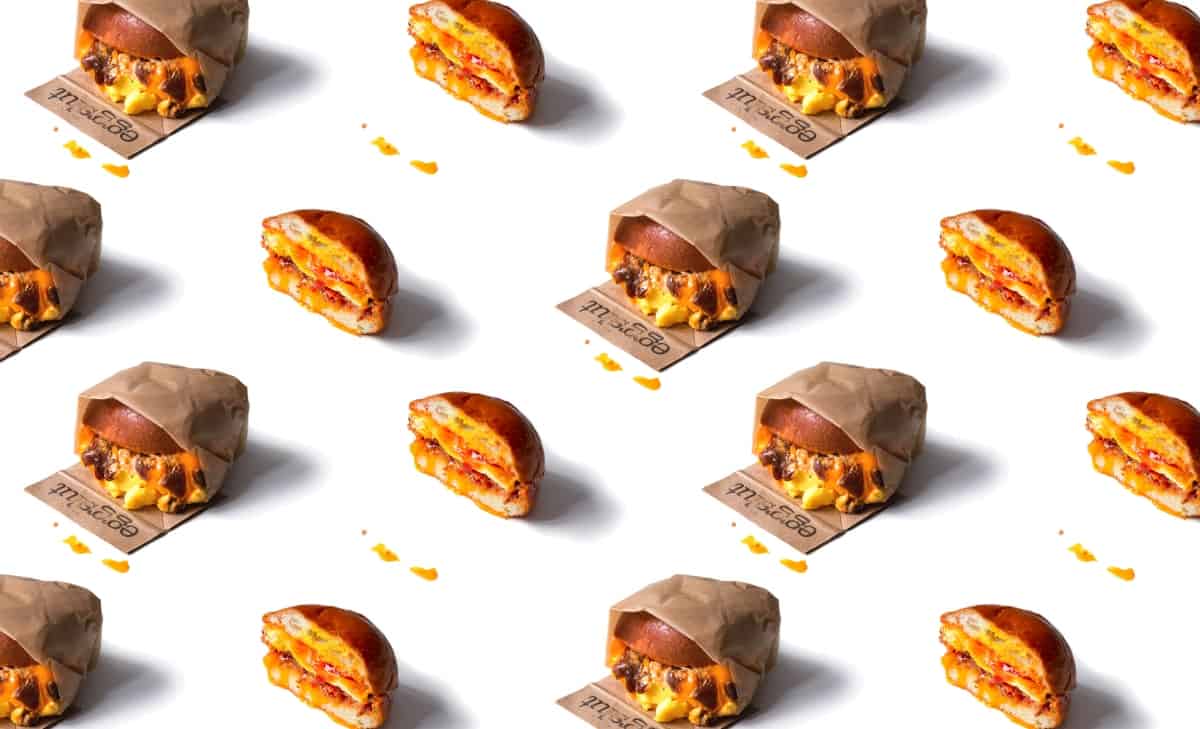 Initially launched as a Los Angeles-based food truck in 2011, Eggslut has become one of California’s most popular eating establishments, with the first permanent site having opened in Los Angeles in 2013. Eggslut now boasts seven locations across the United States, Lebanon and Kuwait, with a UK branch set to open this month. Aiming to make eggs appetising all day, offering a menu that balances comfort with innovation, the brand’s casual London destination will open on Portobello Road, working with suppliers such as Clarence Court, Bread Ahead and Nude Coffee Roasters. This focus on British suppliers adheres to the brand’s focus on using the highest quality locally-sourced ingredients in its menu championing fresh made-to-order eggs. Highlights from the new menu will include the likes of ‘The Fairfax’, a brioche bun filled with soft scrambled eggs and cheese; and ‘The Slut’, featuring a coddled egg atop potato puree, served with baguette slices.

On the launch of the Portobello Road site, Whitney White Myrus, Managing Partner at Eggslut said: “We are absolutely thrilled to be working with Clarence Court, Bread Ahead and Nude. Each of these suppliers deliver premium goods and already have a dedicated following of foodies in London who love eggs on the regs. If you know anything about #FOMO, you know that #FOMOTION (your FOMO emotions) will get the better of you. Don’t miss out on the opportunity to be the first in the country to try Eggslut when we open on 7 August.”

Eggslut is set to open on Wednesday 7th August and can be found at 185 Portobello Road, London, W11 2ED.

Opening in the same building as Tayer + Elementary (responsible for the most discussed sandwich of 2019, by TĀTĀ Eatery), Officina 00 is a collaboration between Executive Chef Elia Sebregondi and Director Enzo Mirto who grew up together in Naples. A fresh pasta workshop combining regional Italian recipes with artisanal pastas, Officina 00 will serve dishes prepared before diners in a “theatre kitchen”. Named after the Italian word for ‘lab’ (officina) and the finest grade of flour (00) used to make pasta, the new restaurant’s menu will be largely flour-led, featuring freshly baked sourdough made to a traditional Sorrentino recipe, Italian pastries and a host of pasta varieties prepared in the front-of-house ‘lab’. The lab will also be a space for experimentation, where chefs will craft and develop dishes, using regional inspiration to influence an evolving menu of pasta-based dishes.

From the menu, signature pasta dishes are set to include Occhi filled with braised pork Genovese, sour parsley and provolone, named after the fishermen (Genoani) who would leave pork to slow-cook while out at sea; and Orecchiette with Peperoncini Verde and almond pesto. As for the drinks, Officina 00 will serve Italian red and white wine on tap, a selection of bottles from a range of both traditional and unconventional labels, twists on classic Italian cocktails and home made Limoncello.

On the opening of Officina 00, Director Enzo Mirto said: “Elia and I have built our friendship around food for many years, sharing recipes and stories, and we are excited to share the vision for Italian food which we have developed.”

Originally planned to open on Holloway Road, the team behind Three Uncles has found a new site near Liverpool Street for the launch of their restaurant, following planning and licensing issues with Islington Council. Specialising in Cantonese Siu Mei, Three Uncles is the product of three childhood friends and chefs, Cheong Yew (Uncle Lim), Put Sing Tsang (Uncle Sidney) and Mo Kwok (Uncle Mo), inspired by an almost daily habit of spending hours at Siu Mei spots in 1970s Hong Kong. Having worked together on the project for the past year, the new restaurant will specialise in Cantonese roasted meats: duck, pork belly and char siu pork. Three Uncles’ secret recipe comprises the classic, laborious six-step technique to prepare the meats which undergo 48 hours of marinating and preparation before entering the oven. Furthermore, the menu will also offer Hainan chicken rice, Lo Mien noodles and dim sum.

On the launch of Three Uncles, co-founder Mo Kwok said: “Siu Mei brings back treasured memories for us; growing up in Hong Kong in the 70s we would visit the famous roast meat cafes near Wan Chai market and watch the skilled chefs chopping delicious chunks of roast duck and char siu pork. Siu Mei remains one of the most popular types of food for everyday Hong Kongers but in London you can only really find it in restaurants in Chinatown so we look forward to bringing this food out to the streets to make it available to all as you would find across the Far East.”

Put Sing Tsang added: “We’ve had techniques shared with us that have been passed down by Hong Kong Shīfù (roasting masters). The roast meats are the star of the show but the flavourful sauces, chillies as well as the cooking of the rice that accompanies the Siu Mei are just as important to the Cantonese”.

Three Uncles is set to open in August and can be found at 12 Devonshire Row, London, EC2M 4RH.

Renowned for their colourful dumplings served at the original restaurant and Market Halls, Victoria, BaoziInn will open a third site this month, taking over a three-storey, 120-cover site on Southwark Street, near Borough Market. Continuing to specialise in Cantonese dim sum with prominent Hunan and Sichuan influences, the new restaurant will act as the brand’s flagship and also introduce a selection of Cantonese roasted meats. Here, executive chef Francis Law’s menu will include the likes of barbecue roast duck, crispy pork belly and caramelised barbecue pork, joined by the restaurant’s famous dumplings, dan dan noodles and buns. BaoziInn will open on Monday 5th August (soft launch until Wednesday 7th August) and can be found at 34-36 Southwark Street, London, SE1 1TU.

BaoziInn will open on Monday 5th August (soft launch until Wednesday 7th August) and can be found at 34-36 Southwark Street, London, SE1 1TU.

A new addition to The Tide – a new ‘cultural linear park’ on Greenwich Peninsula, Mama Fuego is a two-storey venue with a 70-cover restaurant, Milk-Bar, Sunken Lounge, open bakery and private garden overlooking the Thames. With 700 square metres of space and 300 covers, Mama Fuego follows the success of Abuelo in Covent Garden, the first UK venture from mother and daughter team, Lynette and Cloe de la Vega, behind Banksia & Co.

While the new restaurant menu remains undisclosed (at the time of writing), the open kitchen will focus on serving “a new take on Australian-style food”, with particular attention paid to quality, organic produce. The restaurant also promises to offer a variety of seating options for parties of all sizes, from a communal banqueting table to cosy sofa areas for an intimate dining experience. Moreover, the site will serve a coffee menu from its sister venue Abuelo. Single origin, organic Central and South American beans will be combined with world-renowned Australian coffee techniques in hope to provide a truly special coffee experience.

Mama Fuego is set to open in August and can be found at Ground Floor, 69-72 Olympian Way, London, SE10 0NA.

Mourad Mazouz, the creative mind behind Sketch London and recently re-launched Momo will open Mo Diner this month. Inspired by the classic American diners of the 1930s, the Heddon Street restaurant’s interiors have been designed by Mazouz, having collaborated with a number of high-profile collaborators. As for the food, the restaurant’s menu will be inspired by the shores of the Mediterranean, served from breakfast through to dinner.

At breakfast, Mo Diner will serve Mediterranean twists on classics, including Mo hash browns with pomegranate and brown sauce to Berber pancakes with fig marmalade and almonds. A variety of classic egg dishes such as Moroccan khlea with beef, eggs and green chermoula; and Eggs Florentine with spinach, mulukhiyah and aleppo hollandaise will also be available.

Elsewhere, dishes will include the likes of ‘Loulou’s chicken wings’; Merguez in a blanket; grilled octopus with saffron aioli; and Om Ali bread pudding for dessert. In addition, a list of carefully selected wines by the glass and carafe will also be available alongside healthy smoothies, milkshakes and hard shakes.

Mo Diner is set to open in August and can be found at 23 Heddon Street, London, W1B 4BH.