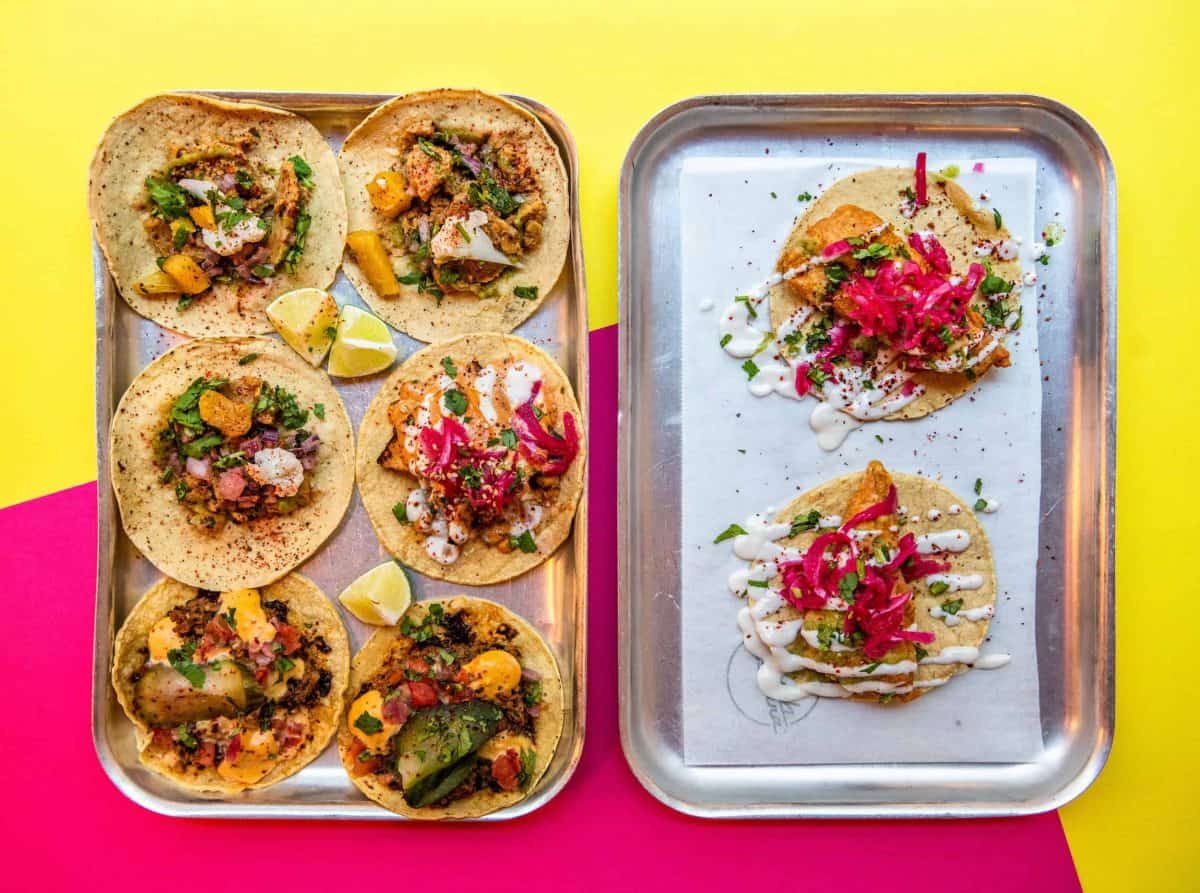 As hospitality businesses continue to re-open, a clutch of brand new restaurants have also planned to open in London. We pick five of the most exciting new openings taking place throughout September.

Following a successful Hackney residency and the launch of The Spread Eagle – London’s first 100 per cent vegan pub – founder Meriel Armitage has opened Club Mexicana in Soho. Originally scheduled to open in March, the new restaurant champions vegan Mexican-Californian inspired street food, taking inspiration from the rowdy taquerias of Los Angeles and Mexico, serving a menu of expertly-made tacos and small plates. At the heart of the open kitchen, a sizzling ‘vegan al pastor spit’ is on display, with dishes including favourites such as beer battered Tofish Tacos; and Chick’n and Avocado, with vegan fried chick’n, corn salsa, pink onions, and hot sauce. Club Mexicana’s much-loved burritos will also be available, including the MFC: a Mexican fried chick’n burrito packed with annatto-glazed fried chick’n, mustard mayo, pickled cabbage and hot jalapeños.

As for the drinks selection, natural wines and Mexican beers will be served alongside cocktails on-tap from Black-Lines, including ice-cold margaritas made exclusively for the new restaurant, as well as smoky Palomas with mezcal and grapefruit.

Club Mexicana is open now and can be found at Kingly Court, London, W1B 5PW.

Rondo at The Hoxton – Holborn

A brand-new restaurant and wine bar, Rondo has opened at The Hoxton, Holborn. Opened as part of a substantial redesign of the ground floor at The Hoxton, Holborn, led by Ennismore Design Studio, Rondo has been created in collaboration with William Lander, co-owner of Quality Chop House, Portland, and Clipstone. In the kitchen, Head Chef Chris Gillard has 15 years of experience working at St. JOHN, serving a menu which makes the most of seasonal produce, championing unsung heroes. Snacks include the likes of pork and duck rillettes; terrine; aubergine tempura with harissa dipping sauce, and a bone marrow toastie. Other launch menu highlights include the likes of smoked mackerel with beetroot and horseradish; crispy pig’s cheek salad with roast shallots and watercress; grey mullet with tomato, fennel, and aioli; and apricot and almond tart for dessert.

As for Rondo’s wine list, William Lander’s selection will showcase creative winemakers and their own unique styles in place of usual safe options. A huge wine wall at the end of the restaurant is the centrepiece of the room, and chrome taps which dispense Rondo’s house wines from kegs. Rondo’s main wine list is made up of around 40 wines, while a ‘Reserve List’ is also available, with 40 special wines priced from £55 – £190.

On the launch of Rondo, William Lander said: “Firstly, it’s a great pleasure to have helped bring Rondo to life – we have tried to create exactly the type of restaurant we ourselves love going to. It’s also very nice to be reunited with Chris Gillard who was head chef at St John in 2003 when I was an 18-year-old barman there trying to figure out what the hell was going on!  At Rondo we aim to celebrate wine in all its manifest complexity rather than narrow in on one particular style or region. Our focus, therefore, is on the winemaker rather than the type of wine they happen to make.”

On the launch of Louie, Guillaume Glipa said: “We think of Louie as a set, imagine; Hidden in plain sight behind a black brick façade, a famed townhouse on 15 West Street, Covent Garden will call itself home to Louie. Only the sly gaze of a dancing alligator adorning the flag outside hints at what lies beyond its doors. Upon entering, you discover a place unlike any you’ve been before; transported into a time you’ve only ever known from black and white films. Your eyes slowly adjust to other colours, a different light.”

Louie reservations are open from Tuesday 8th September and the restaurant can be found at 13-15 West Street, London, WC2H 9NE.

A new Japanese restaurant, TAKA is set to open on Marylebone High Street this September. For the launch menu, Group Executive Chef Taiji Maruyama has collaborated with Head Chef Jonathan Dowling, with the two having previously worked together at Beaverbrook Hotel. The small plate-led menu will focus on hot and grilled dishes, plus sushi, intending to “showcase the finest British produce through an entirely Japanese execution”. With a strong focus on British ingredients, dishes will include the likes of a whole Botterills chicken broken down into its different components and grilled over hot coals to create a complete nose to tail eating experience; as well as the Spanish tapas-inspired kani croquettes, featuring fresh Cornish crab; and fried chicken wings stuffed with truffle and King Edwards potatoes. The traditional Japanese pickle course will be interpreted through seasonal vegetables served as a salad, with mizuma and roasted sesame seeds.

The sushi offering will focus on adaptations of long standing favourites, such as Kagoshima A5 Wagyu sukiyaki with onsen eggs, and popcorn shrimp with daikon salad; while the new restaurant’s spicy scallop open maki with kimchi and yuzu tobiko is designed to be eaten like a taco.

TAKA Marylebone is set to open on Thursday 24 September 2020 and can be found at 109 Marylebone High Street, London, W1U 4RX.