Alongside acting as one of London’s most exciting new restaurants, Strut & Cluck also proves that turkey should not be reserved merely for the festive season. Opened in Shoreditch earlier in the summer by Husband and Wife team Amir and Limor Chen, Strut & Cluck’s is an Eastern Mediterranean restaurant with no meat other than […] 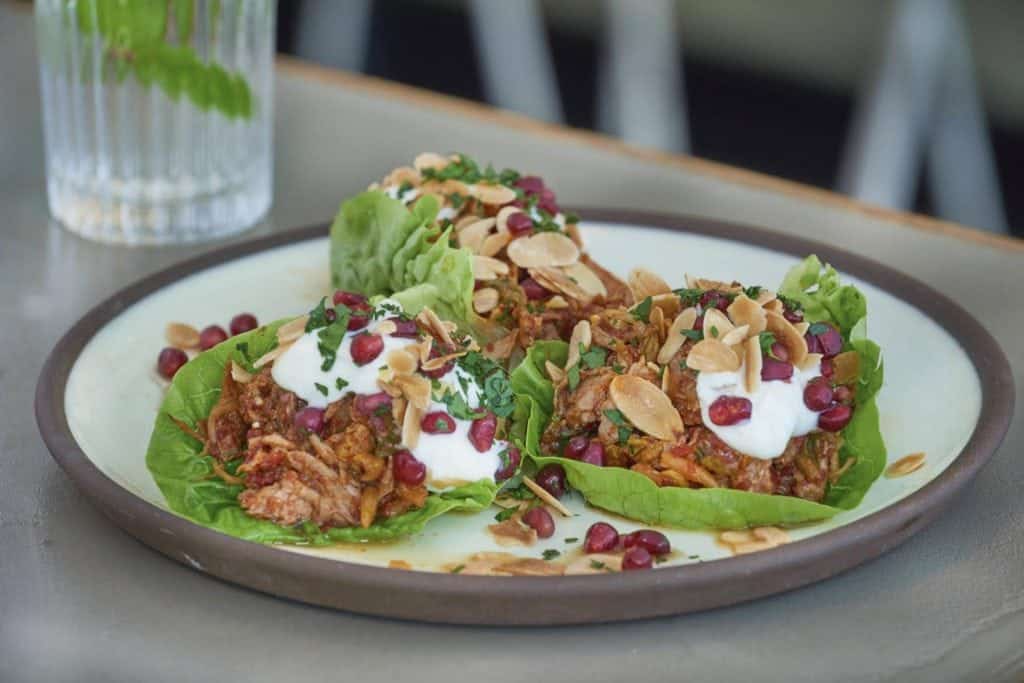 Alongside acting as one of London’s most exciting new restaurants, Strut & Cluck also proves that turkey should not be reserved merely for the festive season. Opened in Shoreditch earlier in the summer by Husband and Wife team Amir and Limor Chen, Strut & Cluck’s is an Eastern Mediterranean restaurant with no meat other than turkey available across the menu. The restaurant’s ‘Far East-Middle East’, for instance, combines multi-national culinary influences to provide a dish. Comprising pulled turkey that’s topped with labneh, pomegranate seeds and toasted almond flakes, served in lettuce cups – not only is the dish remarkably tasty, it is also incredibly healthy.

To Cook the Turkey

Cook two turkey drumsticks or thighs with paprika, garlic, rosemary, salt and pepper, or with your preferred seasoning.

Add some water to baking tin, cover with foil and cook for about 1 ½ hour or until the meat easily pulls apart from the bone.

Remove from oven, cool down a little, then pull the meat with finger or fork, refrigerate until needed.

To Make the Preserved Lemon Dressing

Dried chillies,  5g, or more if you like it spicier

Quarter the lemons, scoop out the pulp and discard, finely chop the skin.

Put water, plum sauce and preserved lemon skin in a small pan, bring to the boil then simmer and gently cook until reduced by half.

Remove from heat and add the chillies, mix well and set aside to cool down.

Refrigerate until needed. Use amount stated on the below recipe, any left-over can last up to a week refrigerated.

To Prepare the Lettuce Cups and to Serve

Seeds of one small pomegranate

Separate the larger leaves from the lettuce to use as cups, 12 altogether, wash, pat dry and set aside

Finely slice one heart of the remaining lettuce, (use only one lettuce heart otherwise you will end up with too much lettuce in the mix).

In a large bowl put all the ingredients, except the large leaves and the garnishes, and gently mix until well combined

Divide the mixture into the lettuce “cups” and arrange on a serving platter.

Top with the labneh/yogurt, almonds and pomegranate seeds. Drizzle the remaining dressing all over for extra flavour, if you wish.

*Labneh is a popular Middle East strained yogurt, you can find it in specialised Middle East food shops, alternatively you could use a good quality thick yogurt but you may lose some of the tanginess of labneh.

Further information on Strut & Cluck can be found at strutandcluck.com.

Tags: How To Make The PerfectStrut & Cluck