An Amaro highball-inspired take on a botanical-infused saison. 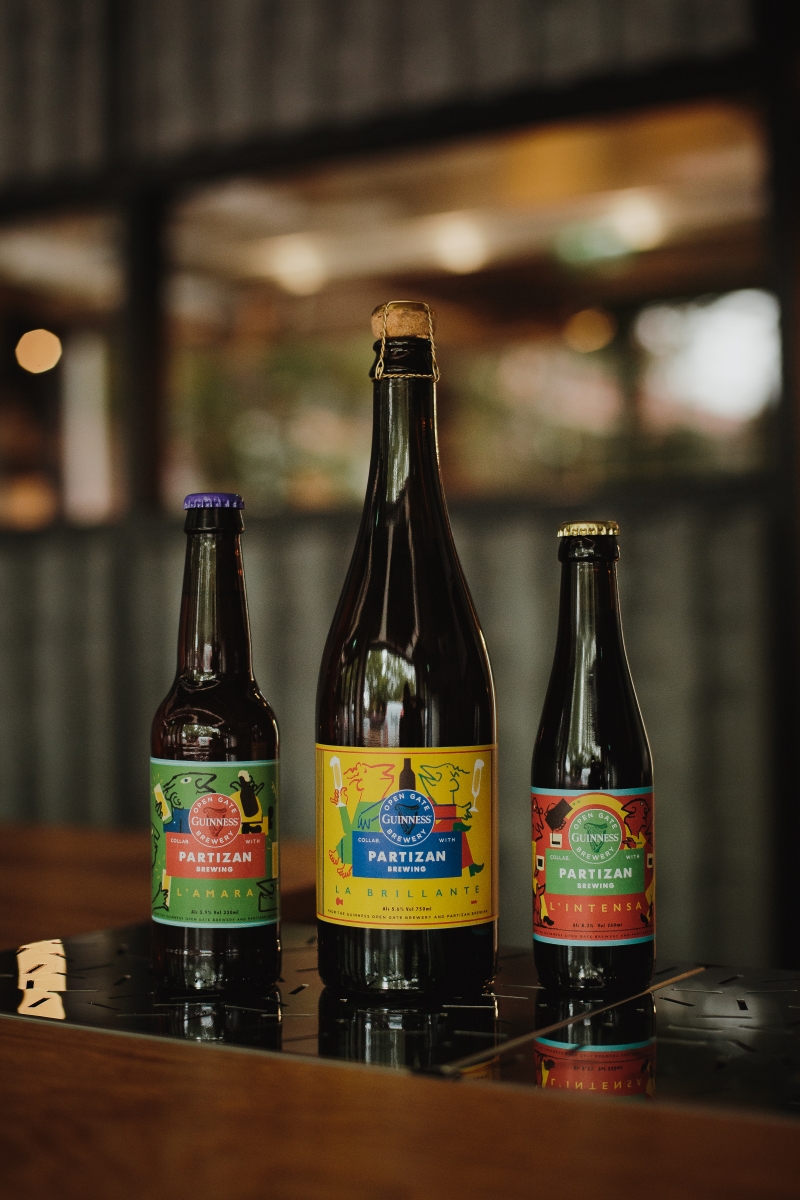 The product of a unique collaboration between Guinness Open Gate Brewery and South Bermondsey-based Partizan Brewing, a new collection of aperitif-style beers. Brewed to show the versatility of beer, these three new limited-edition beers meet the rising demand for hybrid drinks with a unique twist for the beer scene, heavily inspired by the aperitivo trend borrowed from European eating and drinking culture.

For the launch of these beers, Guinness Open Gate Brewery Head Brewer, Peter Simpson, has worked closely with Partizan Brewing Founder, Andy Smith, and world-renowned mixologist Alex Kratena, formerly former Head Bartender at Artesian, London. Drawing from Kratena’s vast knowledge of cocktails and aperitifs, the beers are currently available at the mixologist’s first bar, Tayēr + Elementary on Old Street. From the selection, ‘La Brillante’ is a Champagne-style beer, aged in Oloroso sherry barrels; ‘L’Intensa’ – the most experimental of the three – is a complex botanical ale using botanicals sourced from Santa Vittoria, Italy, and ‘L’Amara’ is a botanical-infused saison, which borrows notes from the Amaro highball.

On the launch of the new aperitif-style beers, Peter Simpson, lead brewer at Guinness Open Gate Brewery said: “We’ve been working on these three beers for nearly year. Andy Smith, Partizan Brewing Founder, and myself ventured to Northern Italy, experimenting on new recipes by dissecting classic formulas that have remained unchanged throughout the centuries. We are always looking to explore new recipes, interpret old ones and experiment to bring exciting new beers to life at the Guinness Open Gate Brewery. We’ve really pushed the boundaries and created the perfect summer refreshment with these three aperitif-style beers”.

Andy Smith, Founder of Partizan Brewing added: “This was a fantastic opportunity for us to work with an incredibly well-known brewery from a very different part of the industry. Collaborating with brewers who are also stewards of such a rich heritage was a real honour.  We at Partizan have always been inspired by the melting pot culture of the city we live and work in and always relish opportunities to break out of the echo chamber, eschewing the easy, cliquey, commercially driven partnerships that often present themselves and looking for more diverse, interesting projects to work on. We learned a great deal, and made connections we’d not envisaged. Overall it was an invaluable experience, made possible – and very enjoyable – by enthusiastic engagement on both sides.  Huge respect to everyone that has been involved.”

Alex Kratena adds: “I am super thrilled to be part of this exciting project that connects cocktails and beer and I treasure the opportunity to be learning from Peter and Andy whose expertise took the liquids to the next level.”

Bottled with a label designed by illustrator Alec Doherty, L’Amara is golden on pour, boasting prominent aromas of orange zest, wormwood and herbal notes of gentian. The complex nose also has a slight aroma of absinthe. Orange zest continues on the palate, joined by a wave of lime and some powerful herbal savours of rosemary, leading to a thirst-quenching bitterness evocative of Averna Amaro which lingers on the delicate, herbal finish.