Britain’s oldest butcher who is the fourth generation to run the family business fears his dynasty is facing the chop – as he has no heirs to take over his life’s work. Dedicated Frank Fisher, 87, still works full time six days a week to keep the shop going. And although he is not yet […] 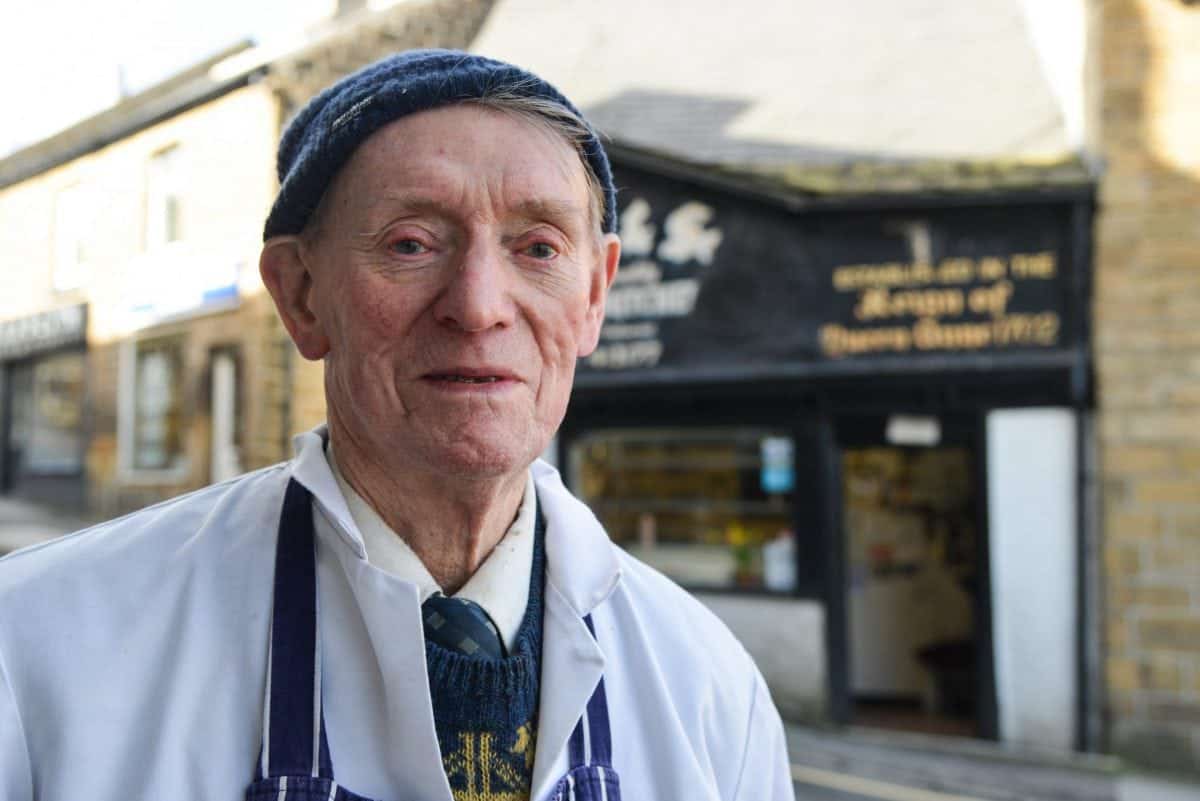 Frank Fisher, 87, is one of the oldest butchers in the country, but is uncertain of his shops future, pictured there near Sheffield, South Yorks., March 21 2017. See Ross Parry story RPYOLD: Britains oldest butcher who is the fourth generation to run the family business fears his dynasty is facing the chop - as he has no heirs to take over his lifes work. Dedicated Frank Fisher, 87, still works full time six days a week to keep the shop going. And although he is not yet ready to pin up his apron, he fears that once when he retires the business will go with him. The bachelor is the fourth of his generation to run the butchers, Fisher and Son Family Butcher's.

Britain’s oldest butcher who is the fourth generation to run the family business fears his dynasty is facing the chop – as he has no heirs to take over his life’s work.

And although he is not yet ready to pin up his apron, he fears that once when he retires the business will go with him.

The bachelor is the fourth of his generation to run the butcher’s, Fisher and Son Family Butcher’s. The butcher’s was established in 1702 and was taken over by Frank’s great-grandfather Jim in 1852 before retiring in 1900.

Frank’s grandfather William then took charge and he ran it until 1955 and it was then passed down to Frank and his dad Percy in 1956.

He has hardly ever had a day off since then – only going on the occasional golfing holiday over the years.

Frank, who lives in the property next door to the butchers on the High Street in Dronfield, Derbys., has never married or had kids. A new supermarket around the corner has hit business, but given Frank a bit of respite.

He said: “I do enough to keep it ticking over. I do work slowly now. If it was full-on busy I might struggle, so I suppose it all fits in nicely.”

He could not take on an apprentice to take over, however, because he couldn’t afford to pay anybody and there isn’t enough work for two people.

Single Frank said: “I’m thinking that when I retire I will try and rent the shop out.

“I think I have done well to stay open for this long. It is a struggle – it is no use pretending anything else.

“A lot of my customers are older and when they disappear I do not get the young customers.”

The premises are still as they were when it opened back in 1702 – back in the reign of Queen Anne. Frank still has an old working til that is exactly the same as the one that appears in 1970s comedy Open All Hours.

And Frank still enjoys his job. “I must do otherwise I wouldn’t do it,” he said.

“It certainly gives me a reason to get up every morning.”

Frank was born in 1930 and lived at Shirecliffe Farm, Hilltop, Dronfield.

He lived on the farm with his mum Florence, dad Percy and his older brother Bill.

“In 1938 we left the farm and my mum took over a beer shop on Hanover Street in Sheffield, South Yorks.

“She left that in 1942 and went to run a convenience shop on Hodgson Street,” he said. She was very good at business.”

Frank’s dad Percy was born in Dronfield and joined the Army when he was a teenager.

“My grandfather William was not very happy about that because he was useful in the shop and was another pair of hands.

“When he came out of the Army my grandfather re-employed him and he went back in the business.” Frank’s brother, Bill, who was three years older than him, worked as a dentist after studying in Sheffield.

Bill was survived by his two sons – Mark, who works in international finance and Adam, who is an engineer.

“Me and Bill got on well together,” Frank said.

Frank left school when he was 14 and his first job was at a butchers firm called Daniels in Sheffield.

“They had three or four shops but I normally worked at the Hunters Bar shop until we took over this shop in 1956,” he said.

Away from work, Frank’s interests include golf and playing draughts and bridge.

“I was a decent draughts player,” he said. “I got to a final when I was 14. Through my mum and brother I started playing bridge.

“I think I was the oldest player at Sheffield Bridge Club until I had to stop.

“I think I am the oldest member of Beauchief Golf Club in Sheffield as well.” Over the years Frank has also had a couple of chance meetings with some well-known faces and even had Michael Caine come into his shop.

Frank said: “He used to come in here in about the 1970s after making the Italian Job.

“He would come in and collect his joint of meat.

“He had been in three or four times before I knew who he was.

“It was only when two girls came across from the bakers with autograph books that I realised he was famous.”