by Phoebe Hunt
in Destinations, Food and Drink, Travel 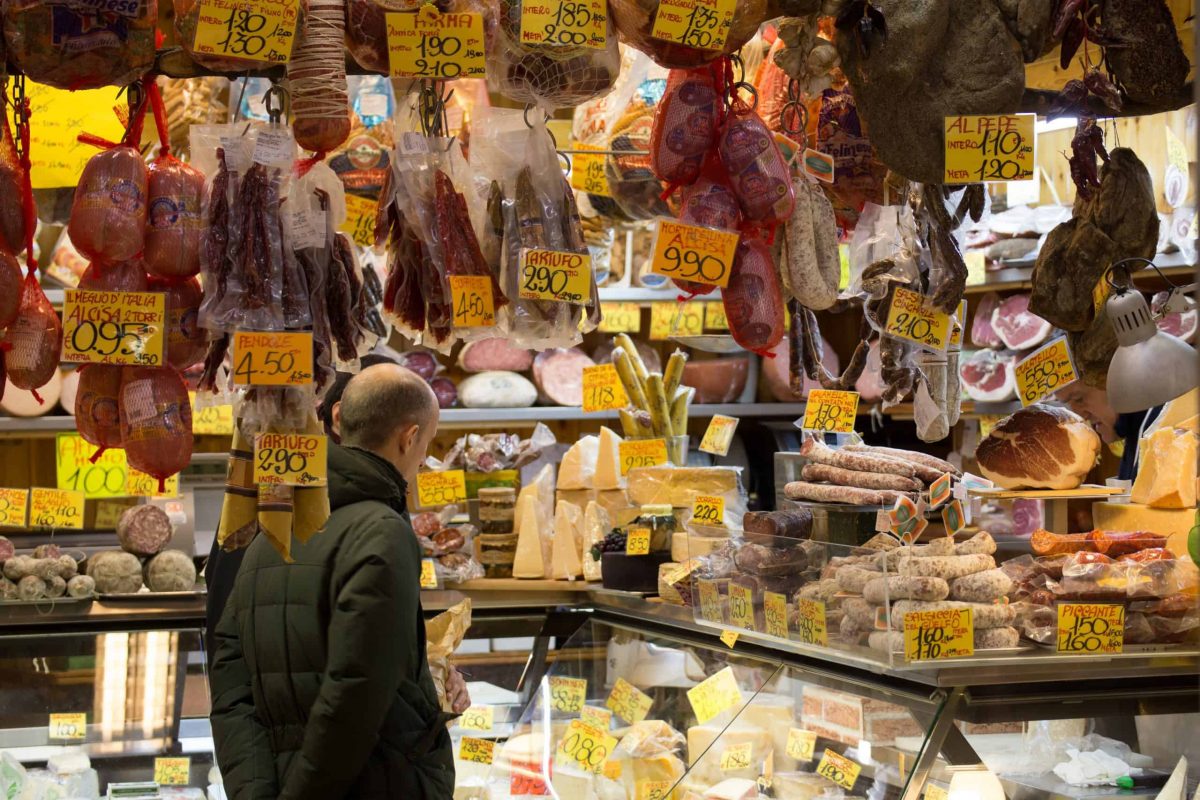 The region of Emilia-Romagna has Italy’s highest concentration of DOP and IGP-certified foods: Balsamic vinegar, Parmigiano Reggiano, Mortadella, Grana Padano, and myriad cured meats all originate from this fertile part of middle Italy. Just as Florence is regarded as the cradle of the Renaissance, Bologna could rightly be described as Italy’s culinary epicentre. Its gastronomic history dates back over two millennia, when the hills and valleys surrounding Bologna were integral to feeding the Roman army. Fortunately, the city’s food scene is alive and kicking today, and it’s a pilgrimage for discerning foodies from Italy and abroad. Bologna is less polished than its Tuscan neighbours, with dingy medieval osterias and faded gelato parlours adding to the appeal for those wanting to get off the beaten track. Here, we’ve planned the ultimate itinerary for a taste of Bologna La Grassa in a day.

First up, unpretentious Aroma café in Via Porta Nova is the place for speciality coffee in Bologna. Start your day here with a cappuccino and pastry as the locals do, or sample their regularly changing ‘daily grind’ in espresso macchiato form. A real institution, they’re open for early morning commuters through to leisurely old ladies enjoying a gossip in the late afternoon. For those with a sweet tooth, the caffè allo zabaione with egg yolks, espresso, sweet wine, and copious amounts of sugar is a must.

Take a stroll around Mercato Delle Erbe, the city’s only remaining covered market, the origins of which date back to Medieval times. It’s a photographer’s dream, with olde worlde fruit and veg stalls crammed high with local produce. Depending on the season, summer peaches and apricots morph into soil-covered mushrooms and winter greens. Pescherias sell to locals and nearby fish restaurants, while pastificios specialise in Bologna’s famous tortellini.

To get under Bologna’s culinary skin, specialised food guide Helena Kyriakides of Yummy Italy hosts walking tours around the market. She’ll take you to historic Formaggeria Barbieri for a private Parmesan tasting, where you’ll sample your way through various ages and stages of the DOP cheese, learning to appreciate its subtleties. Also worth discovering in the market is flat piadine sandwiches (another regional speciality) from Sfarinà for a mid-morning snack. The Classic, made with DOP 18 month aged Parma ham, rocket, and a unique local cheese called Squacquerone di Romagna, is testament to the region’s exceptional produce.

After soaking up inspiration from the market, Otto in Cucina cookery school is a great way to try your hand at cooking some regional specialities. Small classes and ultra-modern kitchen facilities just outside the city centre make a great setting for those who are really serious about cooking, and hands-on classes vary from pasta to panettone. For another authentic sfoglia (pasta-shaping) experience in the town centre, pay a visit to chef Monica, who shot to fame after appearing in the Pasta Grannies cookbook and videos. She invites tourists into her real life pasta lab, Le Sfogline, near Mercato Delle Erbe. Both classes are naturally followed by a sit-down lunch to enjoy your creations.

Having satisfied your pasta cravings, it’s time to sniff out a gelato. Being Bologna, this is to be taken very seriously, and everyone has an opinion on where to go. Gelateria Galleria is a consistent favourite with locals, and the hole-in-the-wall would be easy to walk past if you weren’t in the know. Flavours like goat’s cheese or mint and apricot are unique, but it’s their classic pistachio which stays in the mind. Stefino Organic Gelato on Via San Vitale wins a close second for its ethical credentials and the excellent texture of their gelato.

It’s time to start thinking about Aperitivo. Here, you’ll want to avoid the central quadrilatero around Piazza Maggiore and head off-piste just slightly. If you only have one evening, Gamberini is a rite of passage in Bologna. The historic pasticceria have devised an excellent COVID adaptation to minimise queues, and now serve their much-loved aperitivo snacks on vintage three-tier cake stands: germ prevention with extra panache. Fritti, savoury choux buns, smoked salmon finger sandwiches and obligatory mortadella are washed down with various spritz. Take some of their jewel-like fruit pastilles home with you. If you fancy squeezing a wine-tasting into your itinerary instead, Agricola Tizzano winery and vineyard is a short taxi ride out of the city centre, with breathtaking views over Bologna as you sample Bologna’s native Pignoletto wines (often compared to Prosecco).

Dinner is served, and if you haven’t eaten enough food to put you into a coma, you’re in for a treat. Al Pappagallo has been serving well-heeled Bolognese and international diners for 101 years, and the walls are a shrine to the 1950’s Hollywood celebrities who’ve passed through these doors. Owners Michele and Elisabetta greet guests with real warmth, and we were quickly talked into their world famous tortellini in brodo: dainty pork and parmesan-stuffed tortellini in a clear chicken broth, the proud winner of Bologna’s 2019 tortellini competition. These tiny handmade tortellini can also be enjoyed in crispy deep-fried form as an aperitivo, or for what Elisabetta would view as philistines, in a rich and creamy Parmigiano Reggiano sauce. As good as the tortellini was, the dish that stood out was tagliatelle al culatello profumate al limone – delicately perfumed with fresh lemon zest.

Bologna’s lively student scene comes alive after dinner, and the university quarter is infinitely cooler than the city’s sedate Tuscan neighbours of Florence and Siena. Caffè Rubik has a retro vibe, with hundreds of old cassette tapes lining the walls, and specialises in amaro, while Casa Minghetti is a small and elegant wine bar to finish the day in a more civilised manner. For a true taste of modern Bologna, ultra-central Ruggine is one of the most chic spots in town.