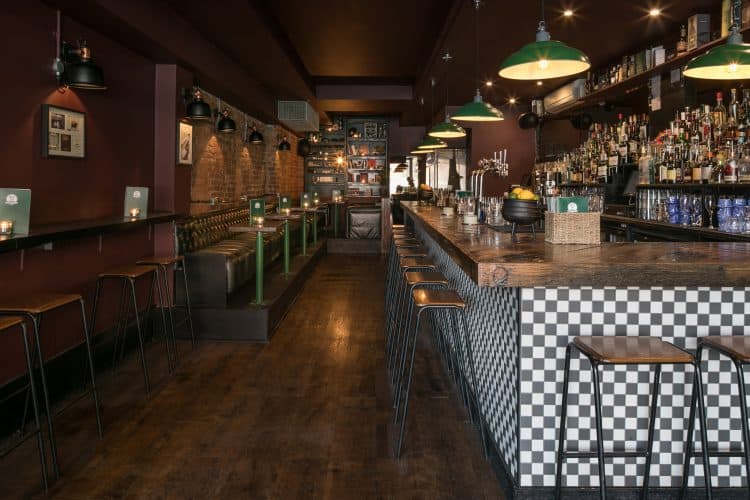 With modern Irish hospitality at its heart, Homeboy has two cocktail bars in London – one in Islington and a new venue at Embassy Gardens in Nine Elms. Established by Irish duo Aaron Wall and Ciarán Smith. Inspired by the old Irish civil laws that stated if a traveller was in need, an Irish citizen must welcome them into their home and offer food, drink, and entertainment; Homeboy also showcases Ireland’s rich drinks offering.

Inside its Islington bar, Homeboy is particularly comfortable, with the feel of a classic London Irish pub; low-lit with dark panelling and emerald accents, down to the chesterfield sofas. But while Draught Guinness is served (having recently been awarded Guinness’ Quality Accreditation Programme), Homeboy is very much a cocktail bar with impressive drinks at the fore.

Showcasing Irish producers, the Homeboy cocktail menu features a decent amount of Irish whiskey, utilising modern techniques to create both contemporary drinks and fresh takes on classics. The bar’s Whiskey Smash for instance plays on the fact that the cocktail spells ‘whiskey’ with an ‘e’, presuming the spirit originally used in 1900 was Irish. Here, Irish whiskey is teamed with spinach to bring Oxalic acid – a common tasting note.

Classics such as an Old Fashioned with Wild Turkey bourbon, Demerara, and orange bitters, or Sazerac with Michter’s rye, Hennessy Cognac, Absinthe and lemon are as good as they get, but it’s with the Homeboy original cocktails that the bar really stands out. The Apple Fan, for instance, is a long, refreshing whiskey drink comprising a blend of Green Spot Pot Still Irish whiskey with Killahora Pom’o apple port and apple sherbet to really bring out the whiskey’s orchard notes, topped with Irish Poachers Premium soda.

The Irish Coffee, on the other hand, is an absolutely perfect after-dinner drink. With the texture of a pint of Guinness, the warm drink comprises sweet coffee with Demerara sugar, Jameson Irish Whiskey, the bar’s own Irish coffee bitters and cream, capped with a dusting of grated nutmeg. Sláinte!