Farmer and former social scientist Chris Smaje makes the case for a society built around local economies and self-provisioning in his debut book, A Small Farm Future. 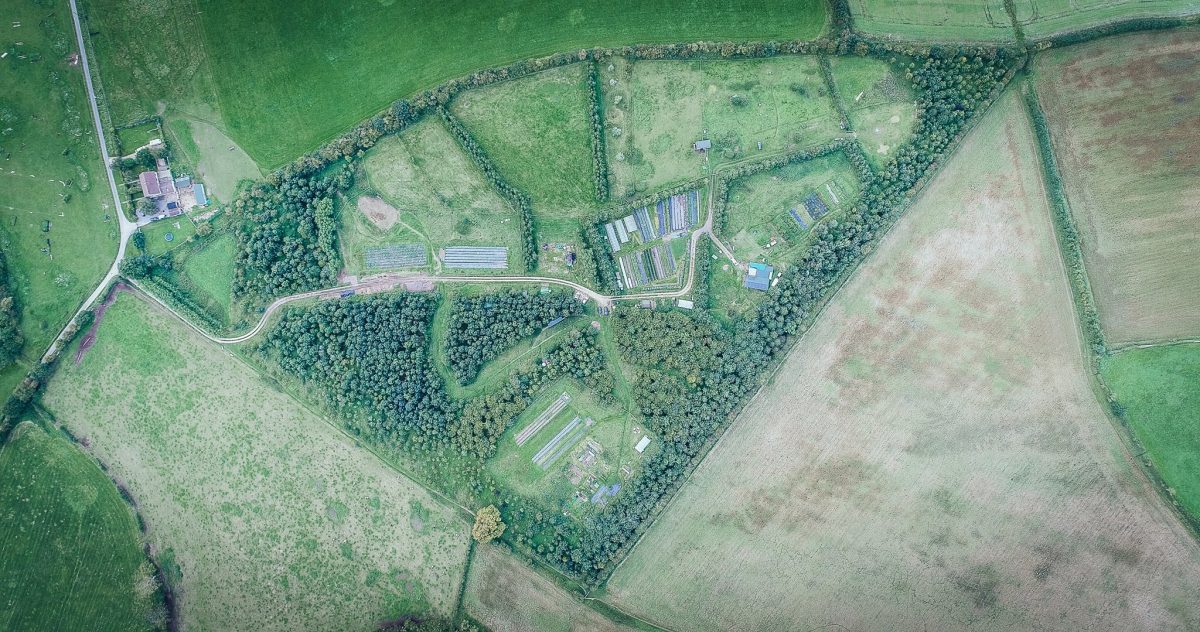 “In a time of uncertainty, what would a truly resilient society look like?” ponders Chris Smaje. In his debut book, A Small Farm Future, the farmer and former social scientist makes the case for a society built around local economies and self-provisioning. In the face of a global food crisis, now even more pressing due to the Covid-19 pandemic, Chris Smaje charts a course to equip the 21st century reader with the agrarian tools to be self-sufficient.

While shop shelves were left barren due to panic buying and uncertainty earlier this year, farmers have been struggling to react quickly to the market’s volatile changes. The ability to pivot has been key, however, with smaller farmers making changes to their normal operations – yet, at the same time, tons of food has gone to waste while the larger supply chain crumbles as our food system’s strengths and weaknesses have been highlighted like never before.

Drawing on his experiences co-working on a small farm in Somerset for the past 15 years, and running his Small Farm Future blog (amongst contributing to other publications), Chris Smaje illuminates a path forward with his new book. Through rigorous and original analysis of ‘wicked problems’ and hidden opportunities, the author highlights the needs for agricultural diversity and a shared earth, ultimately giving readers hope that such a future may be possible, despite being in such a troubled moment in global politics.

The following excerpt is adapted from Chris Smaje’s book A Small Farm Future (Chelsea Green Publishing, October 2020) and is reprinted with permission from the publisher.

Does Goldman Sachs Care If You Raise Chickens?

I was well over thirty before I first raised food for my household. Already a parent, I’d only belatedly started thinking about the future of food and farming. A local farmer had sold me a few point-of-lay hens, and I tended them lovingly in the henhouse that I’d proudly made myself. Not long after I’d started, one of the hens laid the first egg – a perfect brown ellipse, about half the size of anything you’d be likely to see in the shops. I cooked it and divided it up between my family. Each of us got barely a morsel, and I joked that we shouldn’t stake a homestead claim just yet. But I couldn’t help feeling a wild kind of glee that I think most people feel in some way when they raise food for themselves. It’s the same when they fix a car, plumb a bathroom, make a basket or knit a sweater. There are many ways to find fulfilment, but even in our modern commodified society, a lot of people are drawn to practical self-realisation.

There was nothing especially ‘ecological’ about my first faltering efforts as a chicken-keeper. The hens were a commercial variety, bred for a short life of industrially maxed-out egg production, and I fed them mostly on purchased concentrate feed. Since then I’ve gone through various episodes of raising chickens, not raising chickens and raising other plants and animals, searching for methods that better approximate to something that will honour the land and my community long term, though never yet quite finding them. Later in my farming career, when I rose before dawn on wet mornings to spend hours picking vegetables for our customers, the glee I’d felt when I cracked that first egg was sometimes diminished. But it has never gone out entirely.

So when I hear the witticism attributed to Jodi Dean, a professor of political science in New York, that ‘Goldman Sachs doesn’t care if you raise chickens’, I have some skin in the game. What does this mean? I think it means that the world is structured by vast collective systems of value-extraction that are not significantly challenged by someone like me just because I produce a few eggs in my backyard rather than buying them in the shops.

That’s true, of course. But another truth that’s long been known by labour organisers is that existing political structures are challenged only when people act collectively. The same is true of chicken-keepers. And, now that labour can barely challenge a fluid global capital any more through local strikes, perhaps it’s time to imagine a different strategy. There’s a long history of peasant activism geared to recapturing the garden to draw from. In my new book A Small Farm Future, I’ve tried to reconfigure it in terms that make sense for the present world-historical moment. That moment involves impending food and political-economic crises, sharpening the relevance of bygone peasant assertions. What will you do when you can no longer rely on the centralised state that you’re familiar with to keep supplying you with eggs and other forms of welfare?

Perhaps another dimension of the quotation’s dismissiveness towards chicken-keepers is a sense that the modern world is huge, fast, interconnected and highly technological, so any politics able to overturn its dysfunctions must likewise be huge, fast, interconnected and invested in high-tech. This is the critique of ‘folk politics’ that I considered in Chapter 1 of A Small Farm Future. As I said there, I think it’s mistaken. Increasingly, it seems clear that attempts to co-opt the restless developmental logic of capital and turn it towards more genuine human betterment themselves become co-opted into mere variants of the same logic – the same melodramatic tune of human overcoming, played in a different key. And all these variants of the huge, fast, interconnected, high-tech world ultimately rest on an improbable calculus of energy increase, climate mitigation and economic growth.

So against that, I’d assert the virtues of keeping chickens – something that people were doing long before Goldman Sachs got started, and something I suspect they’ll be doing long after it’s gone. We have no real idea what a genuine small farm future might look like, because long ago and willingly or not most of us gave up such visions for a fairytale of wealth increase promoted by the likes of Goldman Sachs. We need to find those visions again, regardless of what Goldman Sachs thinks. So I agree with permaculturist David Holmgren’s tortoise-over-hare emphasis on ‘small and slow’ solutions, and in A Small Farm Future I’ve tried to take those lessons from the henhouse and apply them to world politics.

It’s true of course that we’re facing some vast and pressing global problems, but one of the main reasons they’re so vast and pressing is that we’ve been unable to think outside the frameworks that continue to generate them, so we keep amplifying them. Humanity is now sailing in dangerous waters. In A Small Farm Future I’ve tried to chart what now seems to me our safest course, though without illusions about the difficulties of following it and the chances of success. I think it involves rejecting grand solutionism and creating local autonomies as best we can that may just see us through into a new phase of history, with its own contradictions and difficulties. We need to prefigure it by thinking, and farming, for the long haul. It begins when you start raising chickens.