By Jim Mackney Alfred Hitchcock, born in Leytonstone on the 13th of August 1899, came to be known as the “Master of Suspense” and was a true filmmaking auteur. He is known for a distinct visual style now known as “Hitchcockian” where the camera mimics a person’s gaze, forcing the audience to undertake a form of […] 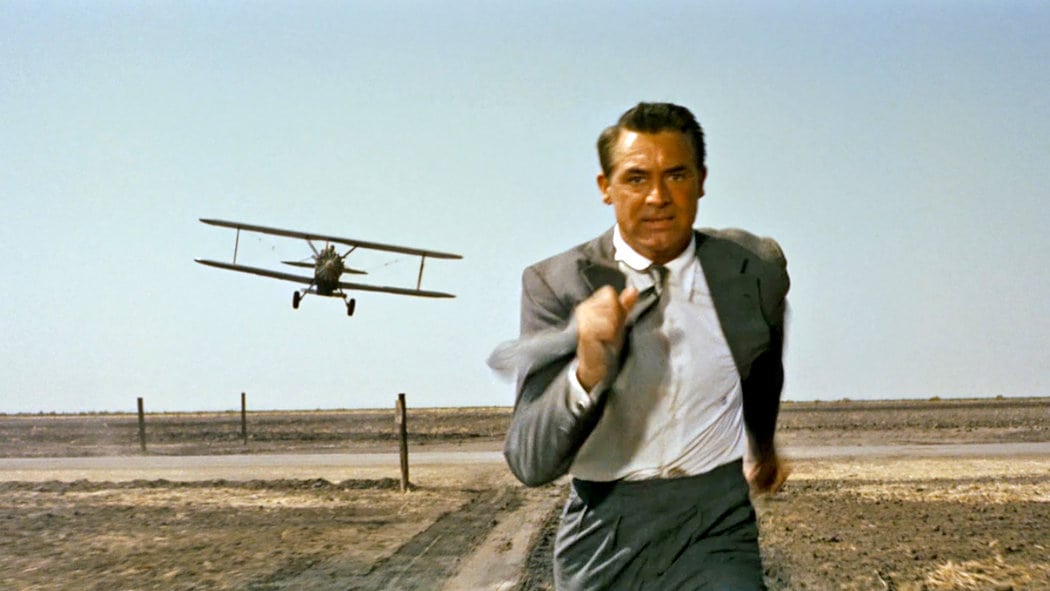 Alfred Hitchcock, born in Leytonstone on the 13th of August 1899, came to be known as the “Master of Suspense” and was a true filmmaking auteur. He is known for a distinct visual style now known as “Hitchcockian” where the camera mimics a person’s gaze, forcing the audience to undertake a form of voyeurism, and for using the narrative principle of a MacGuffin; a plot device in the form of a goal, desired object, or other motivator that the protagonist pursues, often with little or no narrative explanation. Thematically Hitchcock is known for using this device to assert that his films were not as they initially seemed and a way for Hitchcock to keep the audience guessing…the “Master of Suspense”.

Over the course of his career Hitchcock created many classic films that have been prodded, poked and pulled apart by casual fans and film academics and still generate discussion to this day. In honour of the re-release this week of the Remastered “North by Northwest”, I take a look at Hitchcock’s Top 5 Films*

Strangers on a Train

“Strangers on a Train” focuses on playboy Bruno Anthony (Robert Walker) pursuing handsome tennis player and unwilling accomplice Guy Haines (Farley Granger), wrapping him up in plans for the perfect murder. The central premise of this film is  ‘you kill my problem, I kill yours’. Following Bruno upholding his end of the bargain, the psychological thriller hits its stride as the ante is raised towards its delirious conclusion. Hitchcock uses the thematic device of ‘doubles’ in the film and this allows the audience to view the characters and events as the same or perhaps as opposites? These questions run to the heart of the film and ensure the tension is sustained throughout. “Strangers on a Train” is an example of how Hitchcock helped create many of the genre films we see today and it has to go down as one of the first, true identity-inspired mystery thrillers.

“Psycho” is a classic, and one that still reigns undisputed in the Hitchcock canon. “Psycho” was made for a much lower budget and smaller crew, formed mostly of members of his “Alfred Hitchcock Presents” TV show, than other Hitchcock films and this lends itself well for creating a lean and effective thriller. Made for $800,000 – a quarter of “North by Northwest’ – “Psycho” is a film that deals with horrific matters sharply and cleverly and at the time of its release flew in the face of everything the conservative Hollywood Production Code stood for. Psycho is a film that, despite being lampooned and mined in popular culture for decades, has not lost its edge since its release; a true thriller that has stood the test of time.

I remember watching “Rear Window” for the first time in a Film Studies class in college and having just seen “Disturbia” at the cinema, I felt a fool for paying the entrance fee when I should have bought “Rear Window” for half the price. Rear Window finds an injured and wheelchair bound James Stewart, a photojournalist, recovering in his apartment with only his camera for company. He spies a man murdering his wife in the apartment across the street, or did he? Is he going mad from being locked up in his apartment all day, every day? “Rear Window” uses Hitchcock’s use of voyeurism to expert effect with the audience being complicit in what Stewart is seeing and ultimately questioning whether they too are seeing what they think they are. “Rear Window” is Hitchcock at his master-tactician best.

“Vertigo” is an example of a Hitchcock film known for being one academics and film students have pored over and examined. Underneath all of the close analysis however is still a taught and engaging thriller. James Stewart (Hitchcock worked with the same actors more than once throughout his career) plays the role of Scottie, a retired San Francisco detective who finds himself investigating a case of an old friend’s wife who thinks the spirit of her great-grandmother is possessing her. In “Vertigo” Hitchcock turns every decibel in the film up to an ear-splitting level through his favourite themes of murder, madness and obsession and creates a masterpiece of character development in his handling of Scottie with the audience seeing him transform from a classic Hollywood good guy into an absolute monster.

“North by Northwest” is the finest film that Alfred Hitchcock ever made**. It wasn’t the first Hitchcock film that I saw, that pleasure went to “Psycho”, but what grabbed me instantly about “North by Northwest” is that it isn’t really about anything. The film is set up with us seeing Cary Grant, as Roger Thornhill, a Madison Avenue ad man who is mistaken for spy and the role is enjoyable for seeing Grant, a Hollywood icon, bring a high level of sophistication to the role along with a perfect comedic timing. “North by Northwest” is Hitchcock using his tool kit to create a film that is the epitome of man-on-the-run, MacGuffin powered wonder, which buzzes with pleasure, it retains its sense of fun and merriment throughout and acts as a compilation of Hitchcock’s finest tropes.

North By Northwest is in cinemas from Friday 20th